Mikko Rantanen scored in the first period following a terrific twirl move, Philipp Grubauer stopped 34 shots for his second shutout of the season and the high-flying Colorado Avalanche beat the Ottawa Senators 3-0 on Tuesday night.

Mikko Rantanen scored in the first period following a terrific twirl move, Philipp Grubauer stopped 34 shots for his second shutout of the season and the high-flying Colorado Avalanche beat the Ottawa Senators 3-0 on Tuesday night.

Valeri Nichushkin scored a power-play goal in the third for the Avalanche, who've won five straight. Rantanen got things started by taking a pass from Nathan MacKinnon at the blue line, spinning around a Senators defenceman, skating in and lofting a backhand shot over Marcus Hogberg.

"I don't know if it was pretty, but this time it went in," Rantanen said.

Nichushkin gave Grubauer and the Avalanche a little more breathing room midway through the third. Captain Gabriel Landeskog added an empty-netter with just over a minute remaining after the Senators pulled Hogberg for an extra skater.

It was Grubauer's 18th win of the season, which matches his career high set last season. He's won his last four starts. 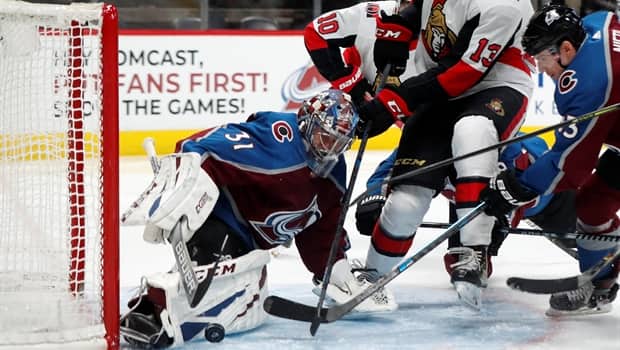 Ottawa dropped to 0-4-2 over its last six games.

"A lot to like from our game," Senators defenceman Dylan DeMelo said. "We played hard right down to the end and made it hard on a really good team."

Hogberg made 33 saves against an Avalanche team that entered the game averaging a league-best 3.65 goals.

The Avalanche returned home for the first time since Jan. 20. Their extended time away from Pepsi Center was on the heels of the All-Star Game, their bye week and then a trip in which they went 4-1. This kicked off the first of five straight "home" games for Colorado, which includes the 2020 NHL Stadium Series outdoor game Saturday down the road at the Air Force Academy against the Los Angeles Kings.

Trailing 1-0 late in the second, the Senators thought they may have tied it up. Nick Paul was shoved from behind by Landeskog, sending him and the puck crashing into Grubauer. The net was knocked off its pegs and the puck crossed the line. After a review, it was determined the whistle sounded before the goal.

"I disagree for sure," Senators coach D.J. Smith said. "That's the call they made."

In a fast-paced first period, the Avalanche scored late after settling a little score early.

Rantanen knocked in his 18th goal of the season with 41 seconds remaining in the period.

Before that, there were some hard feelings following DeMelo's high hit on MacKinnon. Landeskog took exception and later shoved the Senators defenceman to the ice. Landeskog drew a roughing penalty, which the Avalanche weathered.

"I wonder what the response would've been if I really hit him?" DeMelo said. "I really didn't follow through with him. It could've been a lot worse. I'm sure if I finished him I may have had the whole bench go after me. He's a top player in the league, top player for them."

Colorado centre Nazem Kadri will be sidelined indefinitely due to a lower-body injury. Kadri was hurt Sunday at Minnesota. Coach Jared Bednar said after the morning skate that Kadri will be out "weeks, not days."