Carey Price made 37 saves, and Andrei Markov and Brendan Gallagher scored second-period goals as the Montreal Canadiens cooled off the New York Islanders with a 3-1 victory Tuesday night.

Montreal goaltender stops made 37 of 38 shots 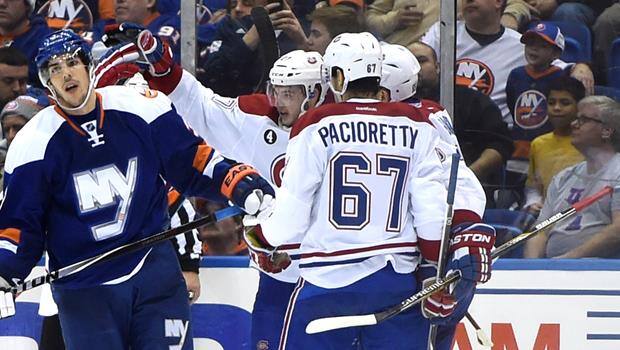 6 years ago
0:20
Carey Price made 37 saves, and Brendan Gallagher scored the winner, as Montreal beat the Islanders 3-1 for their fifth win in six games. 0:20

The message to the Montreal Canadiens after another sluggish first period was familiar, yet still effective.

No, the Canadiens weren't starting their three-day Christmas break early. It just seemed that way.

Carey Price held the fort while his teammates rounded into form, and Andrei Markov and Brendan Gallagher scored second-period goals as the Canadiens cooled off the New York Islanders with a 3-1 victory Tuesday night.

Price stopped 13 of 14 shots in the first while his teammates mustered only three at the other end. He was perfect over the final 40 minutes — making 37 saves overall — and the Canadiens won for the fifth time in six games.

"I am not going to repeat what was said," Price said of the post-first period conversation. "We definitely received the message loud and clear."

The Canadiens have scored only 12 goals in the first period through 35 games this season. They have 79 the rest of the way, including 45 in third periods.

Markov, in his 800th NHL game, and Gallagher beat backup goalie Chad Johnson 5:17 apart to erase a 1-0 deficit. Price has allowed two goals or fewer in the past six games.

"We had a very slow start. We weren't good enough," Gallagher said. "We were only down 1-0. (Price) kept us in it, gave us a chance to get our legs under us and start competing.

"We don't want to rely on him that much, but thankfully we had him."

David Desharnais scored with 1:11 left to make it 3-1 for the Canadiens, who had only 21 shots.

Kyle Okposo scored in the first period for the Islanders. Johnson made 18 saves as No. 1 goalie Jaroslav Halak took a maintenance day and didn't dress for the game. New York, which had won four straight overall, fell to 13-4 at home and 10-2 in its last 12 at Nassau Coliseum.

"We can't forget what we've done here in the past, and what's made us good," Islanders defenceman Travis Hamonic said of his surprising team. "We threw a lot of pucks on net, and it seemed like Price was there every time. He made a lot of big saves."

Halak had played in nine of the previous 10 games.

"It's frustrating," Johnson said of his missed opportunity. "You play to win hockey games. We were right there. It just didn't happen. You've just got to regroup and keep working."

New York had 15 shots in the third in an attempt at another late comeback. This one fell short.

"This is not the old Islanders — definitely not," said Canadiens forward Lars Eller, who set up the final goal. "They are a fast team, relentless."

After going nearly 14 minutes before recording their first shot of the game, the Canadiens needed only 36 seconds in the second period to put a puck on Johnson. Markov made it 1-all at 6:10 on Montreal's third shot of the period.

Hamonic broke his stick near the New York net, and the Canadiens moved the puck from left to right inside the blue line. P.K. Subban set up defence partner Markov for a slap shot that beat Johnson.

Montreal took a 2-1 lead with 8:33 left in the period when Gallagher cleaned up a rebound of Sergei Gonchar's drive and scored his 10th of the season from the slot on the ninth Canadiens shot.

New York held a 23-12 shots advantage through two periods but entered the third down by a goal. The Islanders had two power plays in the first 40 minutes that generated four shots and no goals.

The Islanders controlled the first period and kept the pressure off Johnson, who hadn't played since Dec. 9. New York held Montreal at bay throughout and didn't allow a shot until there was 6:09 left. By then the Islanders had 11 shots and a 1-0 lead.

That goal came at 7:06 after Islanders captain John Tavares created a 2-on-1 break with Okposo by eluding a check at centre ice. Tavares skated freely into the Montreal zone and made a pass from the right circle to the left, where Okposo dropped to a knee and steered in a one-timer for his eighth goal this season and third in six games.