The Montreal Canadiens spoiled the Toronto Maple Leafs home opener with a victory on the road Wednesday night. 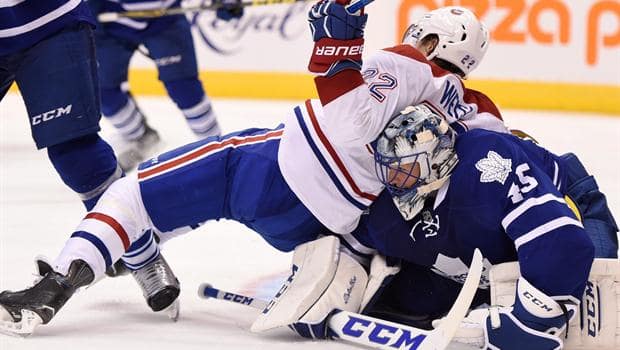 Carey Price got to go through the game-day routine he's comfortable with and looked like he hadn't missed a beat from his MVP season.

The reigning Hart and Vezina Trophy-winning goaltender made 36 saves as the Montreal Canadiens beat the much-improved Toronto Maple Leafs 3-1 Wednesday night in the season opener at Air Canada Centre.

It was the kind of dominance that has become commonplace for Price.

"We're used to that," said captain Max Pacioretty, who scored on the team's first shot of the game and added an empty-netter. "We definitely relied on him a little bit too much tonight, but that's what we're used to. He plays that way every night."

Price was the difference on a night the Leafs carried the play for long stretches and got 37 shots to Montreal's 30. Alex Galchenyuk delivered the game-winning goal in the third period.

"We obviously would've liked to maintain a little bit more offensive-zone pressure," Price said. "But at the end of the day it worked for us, and we'll definitely take the win."

Babcock not satisfied with 'moral victory'

Mike Babcock didn't just want to accept the loss, but his players put forth a strong performance in his first regular-season game as coach.

"There's no moral victories in the NHL," Babcock said. "You either won or you lost. It's real simple that way. But obviously the process is there, and they're trying."

Habs players recognized the Leafs as a much more difficult opponent under Babcock than in previous seasons. But they were more concerned with their own play, which Pacioretty described as having flashes of positives but featuring plenty to work on.

Just because the recipe worked didn't make the Habs all too happy.

"We don't want to allow 40 shots every night," said defenceman P.K. Subban, who appeared to injure his left leg when he was boarded by Leo Komarov but stayed in the game. "We started the game with some zip and then they sort of pushed back and we just ever really got our system going consistently throughout the game. ... We're going to have to play a whole lot better than that."

The Habs got the timely offence they relied on so much last season in winning the Atlantic Division thanks in large part to Price, who set the franchise record with 44 victories and led the NHL with a 1.96 goals-against average and .933 save percentage.

Toronto registered the first four shots, but Pacioretty scored 3:09 in on a shot that hit and went over Jonathan Bernier and then trickled into the net. Bernier finished with 27 saves

Galchenyuk's game-winner at 12:02 of the third period came on a juicy rebound that Bernier left after Andrei Markov's shot from the point.

"He won the MVP last year for a reason so he's a tough one to score on," said James van Riemsdyk, who scored the only Leafs goal when the puck banked in off his left skate. "But we've got to stick with that process, and we'll have some success."