The Ottawa Senators have acquired winger Alex Burrows from the Vancouver Canucks.

The Ottawa Senators are gearing up for a post-season push, acquiring veteran forward Alexandre Burrows from the Vancouver Canucks in exchange for prospect Jonathan Dahlen on Monday.

The deal was announced about 46 hours before Wednesday's NHL trade deadline and gives the Senators a skilled pest with plenty of playoff experience.

The undrafted free agent who fought his way from the third-tier ECHL to eventually star on Vancouver's top line added 19 goals and 15 assists in 70 playoff games.

"We had to do something like this," Senators general manager Pierre Dorion told reporters Monday. "We just felt it was time to add another piece, and in Alex Burrows, I can tell you, we're ecstatic to have added that piece." 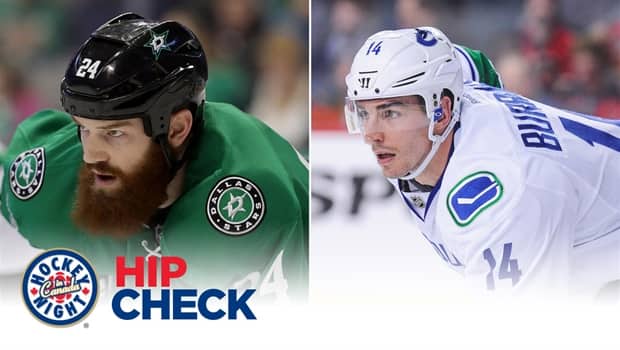 Hip Check: Trade deadline help on the way for Habs and Sens​

"It was a really emotional day," Burrows told reporters in Vancouver. "After practice, talking to my agent about the deal with Ottawa, how it came it up really quickly and I had to make a decision. Before that I weighed the pros and cons. When I looked at Ottawa, I thought Ottawa was going to be a good fit. They have a great team, they have a lot of good pieces ... that's the good part.

"The sad part was I care a lot about this team. I've been here for 12 years. They gave me my first chance. I have lots of good memories, lots of good friendships in that locker-room. It'll be tough to let them go and move on to another team."

Set to become an unrestricted agent this summer, the Pincourt, Que., native had a full no-trade clause in his contract and would have had to sign off on the deal that brings him to the nation's capital. There are reports he could sign a two-year extension with Ottawa as early as Tuesday.

"We've talked about an extension, I think we'll be able to announce something tomorrow," Dorion said.

Looks like 2 x 2.5 for burrows in Ottawa. <a href="https://twitter.com/hashtag/canucks?src=hash">#canucks</a>

He has impressed at the international level, registering six points in seven games for Sweden at the 2017 world junior championship and leading his country in scoring with five points in five games at the 2016 Ivan Hlinka under-17 tournament.

At a news conference shortly after the deal was announced, Vancouver general manager Jim Benning admitted trading Burrows, the longest tenured Canuck after the Sedin twins, was one of the "toughest decisions" he's had to make with the team.

"It's been a hard day. Alex Burrows has been the heart and soul of our franchise for a long time. He's given us everything he's had, he's been so good with our young players this year. But given where we're at right now, we just felt it was time to make the move," he said.

Burrows, whose 822 regular season games with the Canucks ranks only behind the Sedins, Trevor Linden, Stan Smyl and Markus Naslund in team history, was set to be a free agent at the end of this season.

"I wanted to go to a team that was a good fit for me hockey-wise, but at the same time family-wise," said Burrows. "There wasn't really a perfect situation, but I think Ottawa was pretty close to perfect for me."

Benning said the Canucks had discussed a contract extension, but with Vancouver currently sitting with the third-worst record in the NHL, the team decided it would be better to move him for younger assets.

"I had no idea that I'd come to the office and get a deal done today," said Benning, who added the teams began discussing the deal late last week.

The trade deadline is at 3 p.m. ET on March 1, and the Canucks have several other veterans on expiring contracts, including goaltender Ryan Miller and forward Jannik Hansen.

Benning said the team may make additional moves in the next two days.

"We worked all day yesterday, trying to figure some things out. I've got a lot more calls today, and we'll see where we end up," he said.

"If deals make sense for us, we'll work hard to do them."

With files from Justin McElroy