From backup to starter, Thatcher Demko comfortable being in spotlight as Canucks chase a playoff spot

An injury to Jacob Markstrom has pushed Thatcher Demko from his role of reliable backup to being the starter the Canucks must rely upon for the immediate future as Vancouver battles down the stretch for a playoff spot.

For the time being, the Vancouver Canucks playoffs hopes are in the hands of goaltender Thatcher Demko.

An injury to Jacob Markstrom has pushed Demko from his role of reliable backup to being the starter the Canucks must rely upon for the immediate future as Vancouver battles down the stretch for a playoff spot.

In his four starts since Markstrom suffered a knee injury, Demko has managed one win, been scored on 13 times and has given up a couple of soft goals.

Demko is quiet and soft spoken. He has a psychology degree from Boston College and takes an analytic approach to life.

If he feels any pressure from the situation he's been thrust into, the 24-year-old from San Diego, Calif., hides it under a calm, relaxed surface.

"You know, it's the same game whether I played two weeks ago and get a start or if I played yesterday," said Demko, who has a 11-9-2 record. "You still wake up with the same routine.

"We do so many good things throughout the year and we build on habits and we've got to rely on that. I put in the work. I just have to trust that. I know the structure that I have to play with in order to win games and give the team a chance to win. So, it's just sticking to that . . . and relishing the opportunity to play in these big games."

Demko was in net for Vancouver's 4-2 loss to the Arizona Coyotes Wednesday night. It was his 22nd start of the season and 31st of his NHL career. 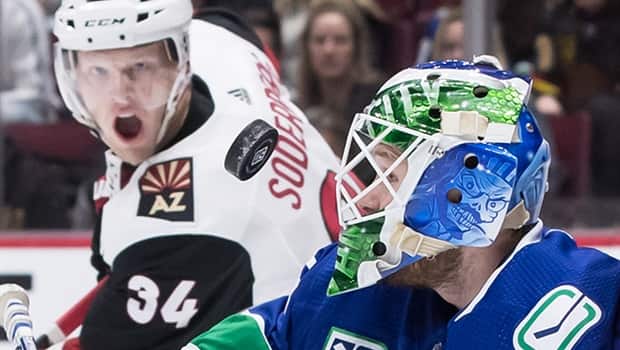 He was the victim of a fluke, over-the-shoulder goal from behind the net in the first period but made a pretty pad save off a Taylor Hall shot and stopped Phil Kessel on a partial breakaway.

There were also some nervous moments in the second period when Demko ventured out of his net and was knocked flat after Hall got tied up with Canuck defenceman Chris Tanev. Demko looked to be in pain but stayed in the game after the training staff examined his left leg.

With 16 games remaining on the schedule, Vancouver has a chance to end a four-year playoff drought.

If Demko plays well down the stretch, he will be credited as the goaltender who stepped in and helped push the Canucks to the promised land. If Vancouver misses the playoffs he will be remembered as the man who couldn't get the job done.

"It's not hard to know what's at stake," he said. "Everyone knows what's at stake. You've just got to rely on your work and your habits. Everyone in this room has played in big games before.

"This last little stretch is when it gets fun. You work all year to put yourself in a position to have an opportunity to make these games. We're excited and we're moving forward."

"This is new for him," said Green, who also coached Demko with the Canucks' AHL farm team in Utica. "I think there is a reason goalies are brought along the way they have been.

"We've tried to get (Demko) games when we felt he needed them or should play but now, once you're the starter, it's a different game and it affects each player differently. He's going to be better off for it and he's going to get better at handling it the more he does it."

"You can't change your game depending on who is in the lineup or who is not, depending on injury," he said. "We have full belief in him back there. He's had a couple really big games for us this year. Hopefully we can get hot for him a little bit and get him some more offence."

Demko simply said "no" when asked if he feels any extra weight on his shoulders.

"Everyone has been through hard stretches," he said. "I remember my first year in Utica was a little bit similar in the way I kind of struggled for a longer stretch than this. It was a battle to find my way.

"I think up here I'm a lot more comfortable than I was that year.  I've been able to prove to the team and myself that I can win games and compete. There's no reason why I can't do that."

The Canucks have has ridden a roller-coaster the past couple of months. Starting in December, they went on a seven-game winning streak and won 14 of 17 games. On Feb. 2 they looked to have the post-season firmly in their grasp with a nine-point cushion on a playoff spot.

That hold has been weakened by Vancouver losing four in a row and managing just two wins in their past eight games. The Canucks'  34-26-6 record leaves them tied with Winnipeg and Arizona for the two wild-card playoff spots in the tight Western Conference.

Injuries have taken a toll. Besides Markstrom, forward Brock Boeser has been sidelined 10 games with a rib cartilage fracture while forward Jay Beagle has missed three games with a lower-body injury. Defenceman Tyler Myers sat out Wednesday with an undisclosed injury.

Green is confident Demko has the physical and mental strength to get the job done.

"I think he's fine," Green said. "Confidence is different from a goalie to a defenceman to a forward. I think he's more than capable and I'm not worried about him."

The next month could help define Demko's career. What some people see as a challenge, he views as an opportunity.

"I'm very excited," he said. "I think you guys are maybe seeing it in a different way than I am. For me, it's just playing hockey.

"Whether it's two weeks between starts or two days, it's still a game. When I wake up in the morning, I do the same thing. It's just taking one game at a time and competing and giving the team a chance to win."