Canucks ship Ryan Kesler to Ducks ahead of NHL draft

The Vancouver Canucks have traded Ryan Kesler and a third-round pick in 2014 to the Anaheim Ducks. Vancouver received forward Nick Bonino, defenceman Luca Sbisa and the 24th pick in Friday night's NHL draft, along with the 85th overall selection, for the 29-year-old centre. 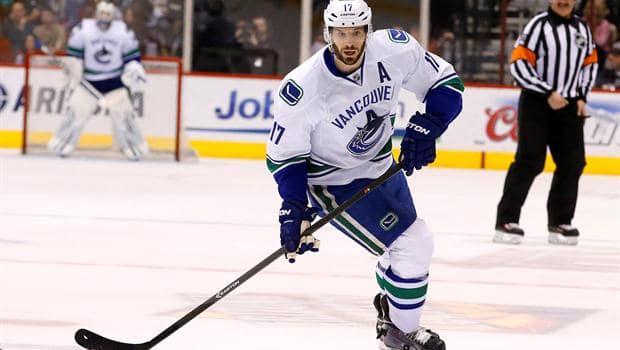 Despite all the changes made in the front office and behind the bench, Ryan Kesler was not satisfied with the Vancouver Canucks' path. He still wanted out.

"It just seemed like the direction they were going didn't fit what I thought my career was going to be," Kesler said. "At the end of the day I want to win a championship and I want to win it now, and four years is a little too long for me."

Not wanting the situation to "fester" like the Roberto Luongo saga did under his predecessor, general manager Jim Benning sought a quick resolution to that problem. He found it Friday by trading Kesler and a 2015 third-round pick to the Anaheim Ducks for centre Nick Bonino, defenceman Luca Sbisa and the 24th and 85th picks in this weekend's NHL draft.

"He just felt he needed a fresh start and quite frankly we don't want somebody that doesn't want to be here," Benning said Friday afternoon before the draft began. "We're going to acquire high-quality people that are going to come in here and want to work hard for one another, so we didn't give it much thought."

Kesler, who turns 30 in August, asked for a trade during what he called a "painful" regular season full of losing that ended without a playoff appearance and ultimately cost GM Mike Gillis and coach John Tortorella their jobs. He met with Benning after the season and reiterated that he wanted to go somewhere he could win.

But the Livonia, Mich., native wouldn't go anywhere. His full no-trade clause allowed him to dictate his destination, and the only two teams he'd approve a trade to were the Ducks and Chicago Blackhawks.

Benning said the Canucks asked Kesler and agent Kurt Overhardt about expanding that list, but to no avail. Chicago was "in it right until the end," according to Benning, but it was important to him to get a potential No. 2 centre and a player who could grow into a top-four defenceman.

He hopes he has that in the 26-year-old Bonino and 24-year-old Sbisa. Bonino had 49 points this past season — some of that thanks to playing with Ryan Getzlaf and Corey Perry — while Kesler had 43. Sbisa missed time with a torn tendon in his hand but has been considered a top prospect since before he was traded to Anaheim from the Philadelphia Flyers for Chris Pronger at the 2009 draft.

"Getting Bonino was an important piece ... [for] being able to replace his goal production for our team next year," Benning said. "Getting Luca, he gives us some physical play from the back end. He's strong. He plays like a heavy game and I think in our division his heaviness is going to come in handy for our group."

When Benning wrapped up the Kesler trade Friday afternoon, he was just getting started making moves. The Canucks traded defenceman Jason Garrison to the Tampa Bay Lightning for the 50th pick in the draft and then flipped the 85th pick acquired from the Ducks to the New York Rangers for grinder Derek Dorsett.

Trading Garrison brings salary-cap relief in the form of $4.6 million over the next four seasons. Acquiring Dorsett means some familiarity, as he played under Desjardins with the WHL's Medicine Hat Tigers.

[Kesler] just felt he needed a fresh start and quite frankly we don't want somebody that doesn't want to be here.- Canucks GM Jim Benning

Despite the bevy of moves, Benning refused to call the Canucks' approach a "rebuild."

"We acquired players that we thought are going to have an impact on us winning next year," he said. "If it was going to be a rebuild then maybe we wouldn't have tried to fight so hard to get players that can come in and help our team win next year."

If Kesler believed the Canucks, under the new direction of president Trevor Linden, Benning and coach Willie Desjardins, were going to win next year, he most likely wouldn't have asked to be traded. The 2003 first-round pick had played his entire career with the Canucks, all 655 games worth.

But on his post-trade conference call, Kesler made it clear he wouldn't have been happy sticking around.

"The fact that they're in a rebuild and are looking to get younger and are years away from being a contender, I think it was just time for me to move on and win and hopefully take home a championship," Kesler said.

Kesler's fond memories of Vancouver included getting drafted, scoring his first goal (with an assist from Linden) and going to the Stanley Cup final in 2011. But much has changed since then, and the Canucks are a team in transition.

The Ducks, on the other hand, consider themselves Cup contenders now after losing to the eventual-champion Los Angeles Kings in seven games in the Western Conference semifinals. But something had to be done to make that next step.

"We knew we needed [a centre to play] behind Ryan Getzlaf," Anaheim GM Bob Murray said. "This is a huge move for our hockey team. We're better today than we were yesterday."

Even though Murray was insistent from the beginning of negotiations that the Ducks were not willing to part with the No. 10 pick Friday night, the Canucks built toward being a better team down the line by getting a first-round pick at 24 and stockpiling with others.

Vancouver took Calgary Hitmen winger Jake Virtanen, an Abbotsford, B.C., native and Canucks fan through childhood, with the sixth pick. Shoulder surgery will keep Virtanen from being able to take contact until at least the fall, but this was another move designed for the long-term future.

In the short term, Kesler gets an opportunity to play behind Getzlaf for a contender, while the Canucks get to move on.

"I didn't want this to linger," Benning said.