Even with their win in Philadelphia on Thursday night the Habs playoff hopes are thin as they head into the NHL All-Star break.

Decisions need to be made despite Thursday's win over Flyers

Even with their win in Philadelphia on Thursday night, the Montreal Canadiens' playoff hopes are thin as they head into the NHL all-star break.

The optimists can look to the St. Louis Blues, who held a similar record to Montreal at this point last season, yet still went on to win the Stanley Cup.

But the pragmatists could already be thinking about resetting for next season.

General manager Marc Berrgevin is ultimately the man who is going to decide if the Habs are going to sell off some of their veteran players ahead of the trade deadline.

A case can be made to stay the course.

The Habs have endured a wave of injuries. It started in early November when the team's sniper Jonathan Drouin needed surgery on his wrist. He was joined on injured reserve by other key players who missed significant time, such as Paul Byron, Joel Armia, Victor Mete and Brendan Gallagher. 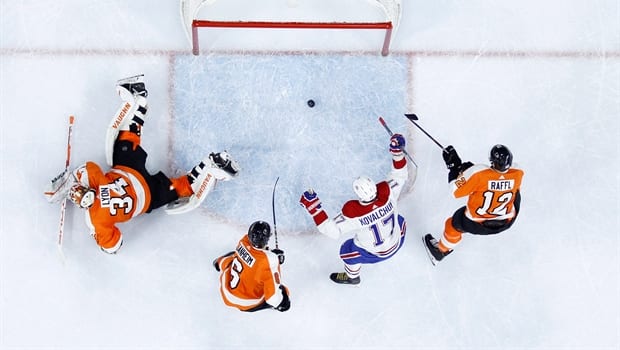 1 year ago
1:11
Ilya Kovalchuk continued his career resurrection and Carey Price looked sharp for an impressive win in Philadelphia.  1:11

The injuries took a toll on the team's fortunes and as a result they endured two eight-game losing streaks which are largely responsible for knocking them out of the playoff picture.

Following the all-star break, it's expected the team will be back at or near to full health and it is possible they could claw their way back into contention.

Despite their hardships, the team has improved in key areas such as the penalty kill. Earlier this season they were the worst in the NHL in that department. They have since jumped ahead of 9 teams to 22nd overall.

Players on the trading block

If Marc Bergevin is ready to give up on this season then it is time to take a look at the roster and see who could be moved.

Tomas Tatar is at the top of most lists right now. The Slovak forward is leading the team in scoring this season with 43 points and with only one year left on his contract after this season, there would likely be several playoff bound teams interested in his services.

Trading Tatar could bring a nice return in the deal but it would also mean cutting ties with someone who is only 29 years old and has been a great fit. Tatar has 100 points in 129 games since being traded to Montreal from Vegas.

Carey Price's name has also once again been a topic of trade discussion among fans. Surely there are teams out there who would love to add him ahead of a run for the Stanley Cup, but Price's contract of $10.5 million US against the cap per season until 2026 might not be something a contender could absorb.

Also complicating things, Price's contract includes a no-movement clause so he would have to sign off on any deal before hand.

At 32 years old, Carey Price understands that the clock is ticking on his career and has expressed his desire to win now. He's also made his frustration with losing well known but he's yet to show any sign that he wants to leave Montreal.

Shea Weber — like Price — is another player with a big contract which would be tough for an contending team to pick up. Weber is also the captain of the team, and while that doesn't make him untouchable per se — the Habs have traded many of their captains away over the years — it does complicate things.

The team's attitude was a focus of concern for Marc Bergevin before Weber took over as captain and since he's had the 'C' on his jersey, there has been a noticeable improvement in the chemistry in the locker room.

Shaking that up by trading Weber could end up doing more damage in the long term than good.

Bergevin has made one thing clear: he's not willing to trade away any of his young prospects in order to acquire veteran help in the short term.

Players such as Nick Suzuki, Ryan Poehling and Jersperi Kotkaniemi — who are already with the team — and prospects such as Russian defenceman Alexander Romanov and American forward Cole Caufield are building blocks and are unlikely to be traded.

In the eight-years Bergevin has been running the Habs, he has not deviated from his plan to hold onto his draft picks and young players to develop them.

His plan hasn't come to fruition yet and fans are losing patience as the team is on track to miss the playoffs for the fourth time in five seasons. But despite it all, Bergevin's job security does not seem to be in doubt. So there is no reason to believe that he will change course this year and do something differently ahead of the trade deadline.