Canadiens general manager Marc Bergevin says he's "extremely disappointed" with comments made by Philadelphia Flyers coach Alain Vigneault about a play involving Montreal winger Brendan Gallagher before it was revealed he had a broken jaw.

After Bergevin said he was "extremely disappointed" with comments made by Vigneault on Thursday about a play involving Montreal winger Brendan Gallagher before it was revealed he had a broken jaw, the Flyers coach offered his own take on the aftermath of a controversial hit by defenceman Matt Niskanen on Wednesday.

Bergevin, speaking Friday morning, criticized Vigneault in answering the first question during a videoconference with reporters.

"I was expecting more and I am extremely disappointed [Vigneault] would make a comment about a player's injuries without knowing the extent of it," Bergevin said. "Brendan Gallagher will be missing an extended period of time and will be eating his meals out of a straw.

"I don't wish that on anybody and that includes the Flyers players." 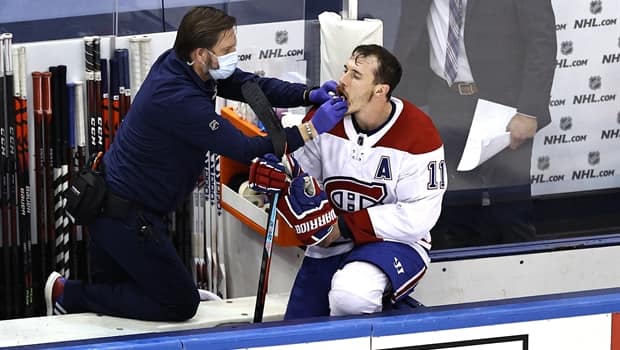 Less than two hours later, Vigneault said it didn't appear Gallagher was seriously injured after being on the receiving end of a Niskanen cross-check in the third period of Montreal's win Wednesday that cut the Flyers' lead to 3-2 in the best-of-seven series.

"You don't like to see any players get injured, there's no doubt," Vigneault said. "But at the end of the day, I can only state the facts, and the fact was that Gallagher got up and his mouth didn't shut up for at least five minutes to the referees, the linesmen and to our bench.

"He didn't look like he was hurt other than, obviously, it looked like he had a cut. I believe if the Montreal medical personnel felt that it was something real serious, they would have probably taken him off and brought him inside (the locker-room). I can only state the facts and state what I was watching. And what I was watching was a guy that just kept on talking. He didn't seem like he was hurt."

Vigneault said Thursday that Gallagher "got up and seemed fine," after the controversial hit in the third period. He defended it as a hockey play and said he didn't think it was Niskanen's fault that the five-foot-nine Gallagher isn't as tall as other players.

Gallagher, with blood dripping from his mouth, stayed on the bench following the incident. He was involved in spirited discussions with both the Flyers and on-ice officials.

"I don't want to see a guy injured. I don't know if he aggravated his injury by speaking with us and to the referees for five minutes," Vigneault said Friday.

The NHL suspended Niskanen for one game Thursday. The Flyers will be missing the defenceman for Friday night's contest.

Niskanen could return if the Habs force a Game 7 on Sunday night.

"The sad part is Brendan's going to miss an extended period of time and their player will miss one game," Bergevin said.

The Canadiens have announced Gallagher will undergo surgery and miss the rest of the series.

"He's a warrior, he wants to play, he wishes he could play," Bergevin said. "That's probably the toughest part for him. not being able to be with his teammates.

"I believe his teammates will rally around that. He is a big part of our team and we can't replace him. But I'm expecting 20 guys to pull the same weight tonight."