Canada repeated as Spengler Cup champions on Saturday, powering past Swiss club HC Lugano 5-2 in a rematch of last year's final. The win is Canada's 14th in the 90-year history of the tournament, second only to HC Davos' 15 wins. 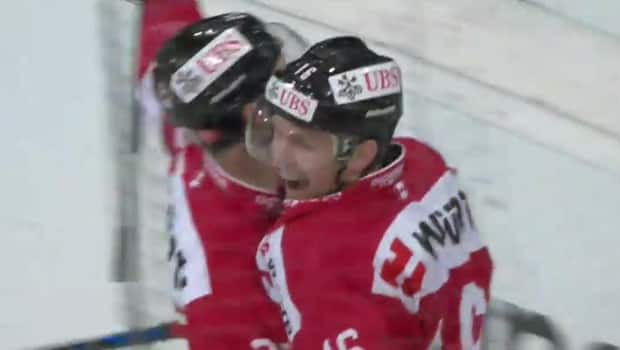 4 years agoVideo
0:26
Cory Emmerton's shorthanded goal ended up being the winner as Canada wins for the 2nd straight year 0:26

Special teams were Canada's backbone at the 2016 Spengler Cup, so it was only fitting that the championship-winning goal came while killing a penalty.

Cory Emmerton's short-handed goal in the second period stood up as the winner as Canada downed HC Lugano 5-2 Saturday, defeating the Swiss side in the tournament final for the second straight year.

Canada came into the final with nine power-play goals over four games but was shut out on four chances Saturday. The other half of the special teams came though, however, as Canada allowed just one goal on six penalty kills while Emmerton scored the Canadians' second short-handed goal of the tournament.

"Our penalty killing was excellent," Canada head coach Luke Richardson said. "We may not have scored on the power play, but we generated some good chances and got a short-handed goal again. In short tournaments like this that really is the key, and that's what came through for us all the way through."

Canada won its 14th Spengler Cup title, and only host club HC Davos (15 championships) has been more successful at the tournament However, Davos has been involved since the tournament's inception in 1923, while Canada did not have a national team competing at the Spengler Cup until 1984.

Nick Spaling, who spent six full seasons in the NHL before joining Swiss side Geneve Servette for the 2016-17 campaign, had an empty-net goal and two assists

"Nick had a great game today. He came in with a bit of an injury and we weren't sure if he was ready to go, but he said 'I'm here and I'm playing,"' Richardson said.

Chay Genoway, Marc-Antoine Pouliot and Andrew Ebbett also scored for Canada, while Dario Burgler had both goals for Lugano.

Zach Fucale ended his impressive tournament with a 40-save performance, picking up his fourth straight win after taking the starting job from Drew MacIntyre.

A star in junior hockey, Fucale has struggled in his transition to the professional game and is currently playing for the Brampton Beast, the Montreal Canadiens' ECHL affiliate. But he showed poise in Davos, particularly in the final.

"He came up with two huge saves in the second period, and he just settled in and played with a lot of confidence," Richardson said of Fucale, who added a Spengler Cup championship to his world junior, Memorial Cup and Ivan Hlinka under-18 titles.

Lugano goaltender Elvis Merzlikins allowed four goals on 36 shots before being replaced by Stefan Muller, who stopped all 10 shots he faced.

Richardson said Canada quickly found the chemistry that is so important in a short international tournament. It showed as the Canadians put a tough 7-4 tournament-opening loss to Dinamo Minsk behind them and improved as the tournament progressed.

"You can always find good hockey players but you've got to find the right people," Richardson said. "I think we had a great group of people here, but it doesn't always work out like that.

"That chemistry doesn't always jell in that short period of time, but it did this year. So that's credit to [Canada general manager] Sean Burke and all the players that came here."