The United States scored two quick power-play goals for a lead they wouldn't relinquish in a 3-1 victory over Canada on Saturday afternoon at the world junior hockey championship. 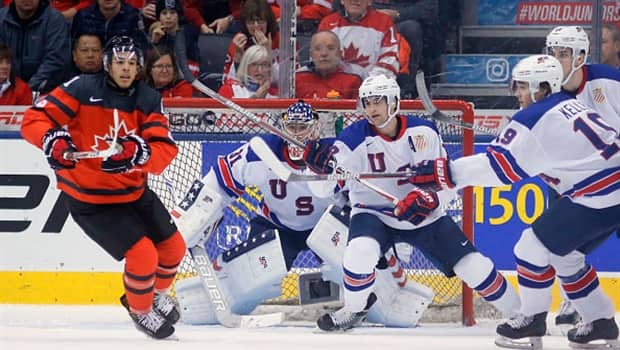 4 years agoVideo
0:26
The Americans skated to a 3-1 victory and a 1st place in their division heading into the elimination round 0:26

If there's one positive to come out of Canada's preliminary round finale at the world junior hockey championship, it's that the team picked the right game to lose.

The United States scored two quick power-play goals for a lead they wouldn't relinquish in a 3-1 victory on Saturday afternoon at Air Canada Centre.

The Americans (4-0-0) took first place in Group B with the win while Canada (3-1-0) settled for the second seed. The victory gave the U.S. a slightly easier path going forward but the New Year's Eve showdown was essentially a warmup game for the playoff round.

For the Canadians, losing a non-elimination game may give them the jolt they need to get back to the podium at this tournament.

"I actually think it's a good thing," said Canadian forward Matt Barzal. "I'd rather have it happen now than the quarters or semis. It's nice to see because we know that's what it's going to take to win. We know how we've got to come out.

"We've got to play desperate. Every shift counts."

The Americans came out flying and had the Canadians on their heels throughout most of the first period.

Canada netminder Connor Ingram drew the starting assignment ahead of Carter Hart, but looked shaky in the early going as the Americans scored on two of their first three shots.

Colin White opened the scoring at 4:31 by one-timing a pass from Jordan Greenway for a power-play goal.

The Americans added another goal with the man advantage at 6:04. Greenway gathered the puck down low and breezed through the top of the crease area to tuck the puck past Ingram.

Canada had a 5-on-3 advantage midway through the first period but couldn't generate a decent scoring chance. The Americans outshot Canada 6-4 in the frame.

U.S. captain Luke Kunin was tossed from the game early in the second period. He flattened defenceman Philippe Myers behind the net and was given a five-minute interference major and game misconduct.

Myers doubtful for remainder of tournament

Myers was slow to get up and did not return. Canadian coach Dominique Ducharme said Myers suffered a concussion and will not play in Monday's quarter-final in Montreal.

"He's concussed. His chances to play in the next game are zero," said Ducharme. "Might be he's doubtful for the rest of the tournament. Might be coming back late in the tournament."

Barzal and Canadian captain Dylan Strome showed flashes of their offensive prowess on the ensuing power play but found it tough to penetrate the stifling American defence.

A tripping penalty by defenceman Charlie McAvoy gave Canada another 5-on-3 advantage. This time the host team applied solid pressure and Thomas Chabot crept in from the point to beat goalie Joseph Woll at 8:12.

The goal gave the Canadian team some zip and sparked the crowd. However, Jeremy Bracco restored the Americans' two-goal cushion when he buried a loose puck at 13:08.

"We're feeling really good about ourselves but nothing has been accomplished yet," Bracco said.

U.S. forward Joey Anderson was sent in on a breakaway in the final minute of the period but Ingram stoned him with a glove save. Canadian defenceman Jake Bean took a needless cross-checking penalty seconds later to snuff out any momentum.

Overall, the Americans matched the Canadians' speed and seemed to want the puck more than their opponents. The U.S. played a more physical game, kept the mistakes to a minimum and appeared more disciplined.

Ducharme admitted his team's execution was a little off.

"It's one game," he said. "We learned from that and we're growing as a group. Now we're starting a new tournament, it's starting in Montreal for us and we'll be ready for that."