The Canadians have been playing so well in this tournament, it really seems like it's up to the opposition — it was determined later in the day it would be Russia— to figure out a way to beat them rather than the opposite.

A great, great challenge and we accept it: Kuznetsov.

One by one, the Canadian players strolled into the media room at Air Canada Centre on Thursday afternoon for an off-day availability at the World Cup of Hockey.

The team's semifinal opponent had yet to be confirmed so questions and answers were broad in nature. There was talk about the process, doing the little things right, and sticking to what has worked in three straight round-robin victories.

The Canadians have been playing so well in this tournament, it really seems like it's up to the opposition — it was determined later in the day it would be Russia— to figure out a way to beat them rather than the opposite.

That went unsaid Thursday, but the numbers speak for themselves.

Canada (3-0-0) is the only team with a perfect record. It has allowed just three goals overall, controlled the play for extended stretches and is averaging almost five goals and over 43 shots a game.

The Russians were in control of their own destiny entering play against Finland on Thursday afternoon. A 3-0 win assured them of second place in Group B and eliminated North America, a high-octane squad of players age 23-and-under from Canada and the United States led by Oilers phenom Connor McDavid.

There are several reasons why the reigning Olympic and World Cup champions are favoured to win again. Canada's goaltending has been strong, the team rolls four strong lines and the defence is top shelf.

The Russians, meanwhile, have a solid netminder in Sergei Bobrovsky and are anchored up front by forwards Alex Ovechkin and Evgeni Malkin. There will be no shortage of motivation on Saturday night for a team eager to eliminate the favourites on their home ice.

"The opportunity is huge," Ovechkin said. "They have a pretty good team with solid players. We just have to match it."

The Canada-Russia semifinal offers a renewal of a classic hockey rivalry, though fans will likely be disappointed they won't get to see the Canadians take on the highly skilled young guns on North America.

It made no difference to Team Canada.

"We're more focused on playing our game, our system," Canada forward Brad Marchand said. "You might have to tweak a couple things here and there but for the most part, we're more concerned about how we play.

"Our style, how our effort is. Just working hard and normally when you do that, good things can happen."

Head coach Mike Babcock said his lineup will be announced after practice Friday. Ryan Getzlaf, Shea Weber and Carey Price are good bets to return after getting a rest in Wednesday's 4-1 win over Team Europe.

Canada's offensive depth has been on display throughout the tournament.

The top line of captain Sidney Crosby, Marchand and Patrice Bergeron shone in a 6-0 rout of the Czech Republic last Saturday. The fourth line of Joe Thornton, Matt Duchene and Ryan O'Reilly was strong in a 4-2 win over the United States a few days later.

Assistant captain Jonathan Toews took a turn in the spotlight with a three-point night against Team Europe.

The offence has been in top form even though star forwards Steven Stamkos, John Tavares and Getzlaf are still looking for their first goals of the tournament.

The Canadian roster is so deep, Marchand said he caught himself in the early going just looking at the guys in the locker-room. His first appearance with the senior men's national team came earlier this year at the world championship but this World Cup squad is a different level.

"Almost just surprised at how incredible the team was," he said. "Being in this city and taking everything in and being around the fans and all the Canadian jerseys all the time, everything about (this) has been incredible. It's been a lot of fun, every game so far.

"This is where it gets even better. It's do or die now. It makes it that much better now. Each day is just a special experience."

Russia finished round-robin play with a 2-1 record, scoring eight goals while giving up five against.

"It's going to be a great, great challenge and we accept it," said Russian forward Evgeny Kuznetsov.

Team Europe will play Sweden in the other semifinal on Sunday. The best-of-three final series begins Tuesday. 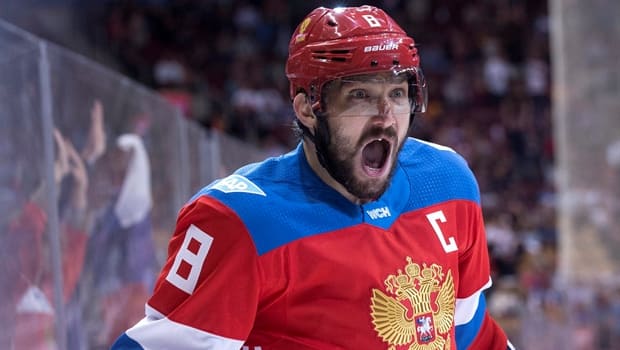 Russia in, Team North America out at the World Cup of Hockey

4 years ago
0:44
Russia defeated Finland 3-0 on Thursday at the World Cup of Hockey to advance to the semifinals, while in the process eliminating Team North America from playing in the final four. 0:44
CBC's Journalistic Standards and Practices|About CBC Sports