Canada is aiming to return to the top of junior hockey on Dec. 26 when it takes on Russia to begin preliminary round play at the world junior hockey championship.

Strome, Chabot among keys to success 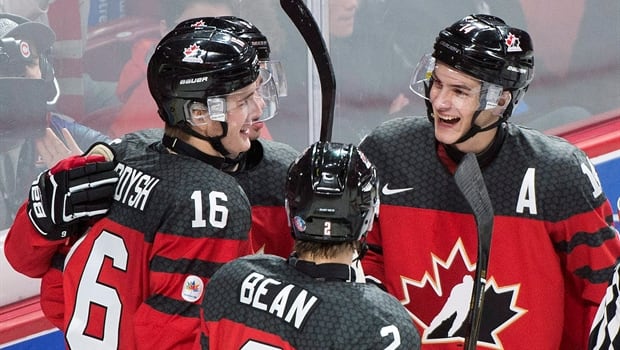 4 years agoVideo
4:25
The Canadians lost to eventual champion Finland at last year's tournament in Helsinki. Canada last won the world juniors in 2015 in Toronto for its 16th title. 4:25

Canada is aiming to return to the top of junior hockey on Dec. 26 when it takes on Russia to begin preliminary round play at the world junior hockey championship.

The Canadians lost to eventual champion Finland at last year's tournament in Helsinki. Canada last won the world juniors in 2015 in Toronto for its 16th title.

Here's five things to know ahead of this year's event:

The Canadians have medalled in all 11 world juniors held in Canada since the tournament began in 1977 — including five golds.

Their most recent appearance on home ice was in 2015 when they held on to beat Russia at Air Canada Centre in Toronto.

Canada is in Group B with the Russians, United States, Slovakia and Latvia in this year's event and plays all of its preliminary round games in Toronto with Group A playing out of Montreal. Aside from two quarter-final games in Toronto, the medal round will be hosted at Bell Centre in Montreal.

Five players from last year's roster will return for the Canadians, including captain Dylan Strome.

Strome, from nearby Mississauga, Ont., scored four goals and two assists in five games during the 2016 edition of the tournament. The six-foot-three, 194 pound centre was drafted third overall in the 2015 NHL draft by the Arizona Coyotes.

The 19-year-old played seven games this season with the Coyotes, collecting one assist, before they returned him to the Erie Otters of the Ontario Hockey League.

Also returning to the team are assistant captains Mathew Barzal, a New York Islanders prospect, and Thomas Chabot, an Ottawa Senators draft pick. Julien Gauthier and Mitchell Stephens round out the five returnees.

Carter Hart and Connor Ingram will be in net for Canada at this year's tournament.

Goaltending was detrimental for the Canadians at last year's world juniors, with their combined 3.58 goals-against average and .859 save percentage ranking amongst some of the worst at the event.

Hart and Ingram are two of the top goaltenders in the Western Hockey League this season. Hart, of the Everett Silvertips, leads the league in goals-against average at 1.85 while Ingram, of the Kamloops Blazers, is in third at 2.12. Ingram leads the duo in save percentage at .935 and Hart is a close second at .928. Hart also has four shutouts.

Both goaltenders have been solid throughout pre-tournament play with Hart collecting a 25-save shutout in a 5-0 win over Finland and Ingram making 21 saves in a 5-0 shutout against the Czech Republic.

Head coach Dominique Ducharme has yet to tip his hand as to who will start for Canada against Russia.

Ducharme is a proven winner

Ducharme will be behind the Canadians' bench as head coach for the first time, although was an assistant on the 2016 squad in Helsinki.

The 43-year-old won gold with Canada's under-18 team at the 2013 Ivan Hlinka tournament and also captured a Memorial Cup with the Halifax Mooseheads earlier that year.

Ducharme, who is currently the head coach and general manager of the Quebec Major Junior Hockey League's Drummondville Voltigeurs, is assisted by Tim Hunter, Kris Knoblauch and Misha Donskov.

The Canadian head coach says that he has a good skating team and that there's good chemistry between the players, despite only playing together for two weeks.

Chabot is the only returning defenceman for Canada this year and is expected to play some big minutes on the blue line.

The 19-year-old from Sainte-Marie, Que., started the season with the Senators before being returned to the Saint John Sea Dogs. Chabot has five goals and 15 assists through 14 games with Saint John, which is tops in the QMJHL and ranked No. 5 in the country.

Also on defence is Montreal Canadiens prospect Noah Juulsen, who was taken in the first round of the 2015 draft, Rouyn-Noranda Huskies duo Jeremy Lauzon and Philippe Myers and Dante Fabbro of Boston University.

Jake Bean of the Calgary Hitmen and Kale Clague of the Brandon Wheat Kings round out the defensive corps. Myers is the only defenceman that hasn't been drafted by an NHL club.