The underdog Czech Republic hung tough until Canada pulled away on a pair of third-period goals from Julien Gauthier to win their quarter-final at the world junior hockey championship on Monday night in Montreal. 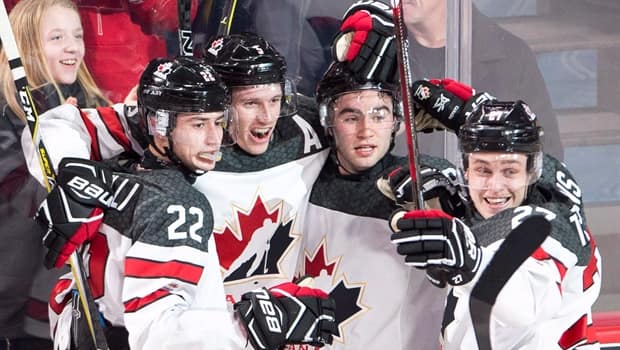 They owned the puck most of the night and dominated the shots 41-19, but there were some tight moments in Canada's 5-3 win over the Czech Republic at the Bell Centre in Montreal.

The Czechs took the first-period lead and tied it 2-2 in the second before Canada pulled away on a pair of third-period goals from Julien Gauthier to win the quarter-final at the world junior hockey championship on Monday night.

Canada advanced to a semifinal on Wednesday night against Sweden, which breezed past Slovakia 8-3.

"I don't think I'd use the word scare," forward Blake Speers said of the win. "We've got a lot of confidence in our room and we knew we'd have to score more than one to win the game so, one goal wasn't really a big deal.

"The big thing for us was not to change anything. Maybe be hungrier on pucks and win a few more battles, but we knew we'd score goals if we stuck to our game plan."

Speers scored Canada's first goal of the game on his 20th birthday.

"All I really wanted for my birthday was the win, but it's nice to get a goal to put the icing on the cake," he added.

Julien Gauthier, with two, Mitchell Stephens and Thomas Chabot also scored for Canada. All three of them, plus forwards Dylan Strome and Matt Barzal, were members of the Canadian team that was ousted in the quarter-finals by Finland at last year's world juniors.

Sweden is 5-0 and has been one of the tournament's most impressive teams.

"Canada-Sweden's always a big rivalry," said Strome. "When you play a big country in this tournament, it's big and Sweden's no different.

"They play a very North American game and they're all big and they can skate, so we'll have to play a good game to have a chance. It feels good. The semifinals is one step further than last year and we're looking forward to taking the next step after that as well."

Stephens also had two assists in his first game back after missing two with an undisclosed injury.

"Kudos to the training staff we have here — they got me back on the ice sooner than expected," said Stephens. "Being off a couple of days helped, but I had to get my legs under me."

Canada had an 11-4 shot advantage in the first period, but the Czechs caught a break for the only goal at 16:49 when a puck deflected in front of Connor Ingram and looked to going well wide when it struck Slovak referee Jozef Kubus and bounced straight to Kase alone in front of the net. His quick shot went under Ingram's arm to give the Czechs the lead.

Some jeers could be heard in the crowd as Canada left the ice trailing 1-0 after the first period.

Speers went to the net to redirect Stephens pass behind Jakub Skarek 3:45 into the second frame and Anthony Cirelli won a draw from Michael Spacek directly to Stephens for a quick shot inside the near post at 7:27.

The announced crowd of only 10,215 at the Bell Centre groaned as Tomas Soustal used a toe drag on a rush to get around Noah Juulsen and score at 8:53, but Chabot restored Canada's one-goal lead when he stickhandled through the defence and scored from the slot at 13:32.

Biggest surprise at the World Juniors is the empty seats. This is 6 minutes into Canada vs Czech. <a href="https://t.co/o8QqQVZouh">pic.twitter.com/o8QqQVZouh</a>

Gauthier scored on a feed from behind the net from Nicolas Roy 3:18 into the third, but Simon Stransky got it back at 5:54 as he swiped Ingram's big rebound into a open side on the backhand.

Gauthier got another at 6:67 as he banged in Barzal's rebound.

The Czech game plan was to trap and counterattack, and it worked for nearly half the game.

"We had to play our game, what the Czech national team is best at, and that's blocked shots and good defence," said forward Filip Chlapik. "Every guy did an amazing job.

"Probably our best game of the tournament. Too bad we didn't play that way all tournament because we could have been in a different position."

The empty seats at the 21,000-seat Bell Centre were a disappointment, but the fans made plenty of noise.

"We were expecting a crowd like Toronto," said Strome. "We got onto the ice and it was like 'hopefully people are coming in.' It did kind of fill out toward the end of the game. And they were still loud. It is the best building in the NHL. It's loud and crazy even if there is a couple of empty seats."

Canada routed the Czechs twice before the tournament — 8-0 during their selection camp in Boisbriand, Que., three weeks ago and 5-0 in an exhibition game in Ottawa on Dec. 21.

Defenceman Philippe Myers, who suffered a concussion in the final preliminary-round game against the U.S., did not play. His spot on a pair with Chabot was taken by Kale Clague.

Coach Dominique Ducharme said no decision has made on whether Ingram or Carter Hart will start in goal against Sweden.