Dillon Dube scored the eventual game-winner and added an assist for his first career multi-point game as the Calgary Flames made it four straight victories on Saturday with a 4-3 win over the Los Angeles Kings.

Dillon Dube has made a big impact on the Calgary Flames' since being called up from the minors three weeks ago. He's also helped Milan Lucic turn his season around.

Dube and Lucic each had a goal and an assist as the Calgary Flames beat the Los Angeles Kings 4-3 Saturday night for their fourth straight win.

With the Flames up 3-2, Dube scored his third goal in nine games this season, neatly burying a rebound of Derek Ryan's shot at 1:29 of the third period. The sequence started with Lucic's outlet pass.

"It's great to see when a young guy comes in and provides what he's been providing, it sometimes re-energizes us older guys to play the way that we can," Lucic said. "I talk about my game moving in the right direction since the Las Vegas game when he got called up and he's been a huge part of me turning it around."

Dube made the Flames out of training camp last season, but eventually spent most of the year in the minors. In 25 games with Calgary, he only scored once.

"It's a credit to (Lucic) and (Ryan)," Dube said, about how well he's fit in on that line this season. "When I came up to play with them, we all complement each other really well and it's easy playing with them."

Interim coach Geoff Ward believes starting this season in the AHL was good for Dube, allowing him to learn and develop.

"He shows more confidence with the puck," Ward said. "Last year he was trying to get rid of it right away which is a sign of a player that maybe isn't ready to play at this level yet, but now he's playing with the puck and allowing his skill to stand out." 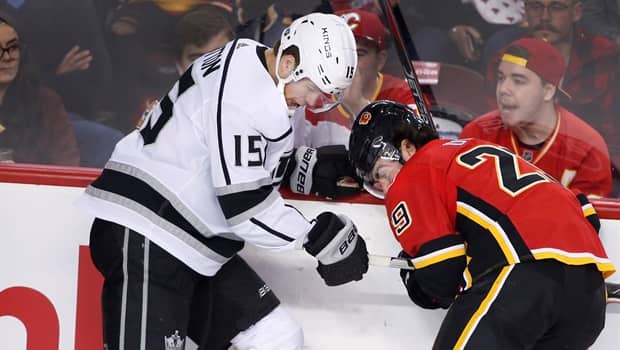 11 months ago
1:35
Dillon Dube had his first multi-point game at the NHL level as the Calgary Flames knocked off the LA Kings 4-3. 1:35

Cam Talbot, making his first start since Nov. 17, overcame a shaky start and finished with 30 saves to end a four-game losing streak.

Drew Doughty and Anze Kopitar each had a goal and an assist for Los Angeles, and Matt Roy also scored as the Kings led 2-0 before falling to 0-10-1 in their last 11 on the road. Jack Campbell finished with 26 saves.

"We've played very well with the lead," Doughty said. "So after the first period, with that good start, we felt pretty comfortable in here, maybe too comfortable. We didn't push enough in the second. Maybe sat back a little bit too much and we allowed them back in the game."

Roy pulled the Kings back within one with 5 1/2 minutes to go.

Talbot's best stop of the night was a glove save on Roy, looking for his second goal, with just over a minute remaining.

"From a team standpoint I think we did a lot of good things,"Campbell said. "Individually, if I give up four, it doesn't matter what I did out there. It's not good enough."

Monahan gave Calgary its first lead of the night at 11:46 of the second to put the Flames up 3-2. While Monahan's shot was perfectly placed inside the post, it was set up by a great rush up the ice by Johnny Gaudreau.

The Kings got off to a 2-0 lead on a pair of first-period power-play goals from Kopitar and Doughty, the goals coming 6 and 13 seconds into their only two man-advantages of the first period.

Lucic started the Flames' comeback on the power play with his second goal of the season, second in two games and 200th of his career on a slap shot with 1:46 left in the opening period.

The Flames tied it 3:01 into the second on a slick move from Rinaldo, who cut across the top of the crease and buried his first of the season.