Sean Monahan scored 2:09 into overtime to lift the Calgary Flames over the Colorado Avalanche 5-4 on Monday night.

Calgary extends win streak to 5 while stopping Colorado's at 6

The Calgary Flames have traded controversy for good fortune and turned their season around. They even found a way to beat the Colorado Avalanche.

Sean Monahan scored 2:09 into overtime and the Flames rebounded after losing a two-goal lead to beat the Avalanche 5-4 on Monday night.

Matthew Tkachuk had a goal and an assist, Derek Ryan also scored and David Rittich made 28 saves for Calgary, which has won five in a row under interim coach Geoff Ward and finally broke through against Colorado this season.

Ward took over for Bill Peters, who resigned after it was disclosed he directed racist slurs at a Nigerian-born player in the minors a decade ago and kicked and punched players behind the bench during his recent stint with Carolina.

Calgary was 11-12-4 under Peters but has yet to lose with Ward behind the bench.

"We're having fun right now, we're enjoying it," Monahan said. "When you come to the rink and you're working for the guy next to you, and to see smiles on guys' faces, that goes a long way." 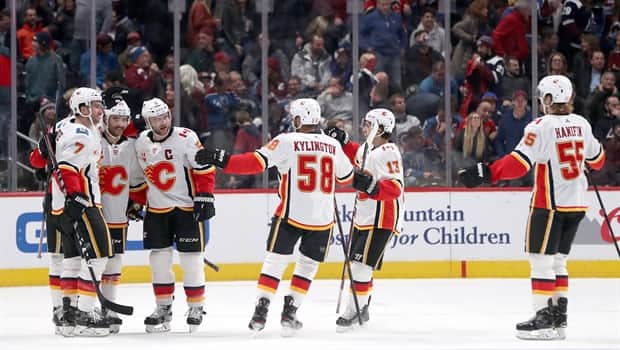 The smiles were out again after the Flames beat a team that's had their number. Calgary has struggled against the Avalanche of late, starting with the first round of the 2019 playoffs when eighth-seeded Colorado won in five games. The Avs won the first two meetings this season as well.

Monahan ended the frustration when got a pass from Dillon Dube and beat Colorado goalie Pavel Francouz, who finished with 28 saves.

"Dubes made a sick toe-drag right in the middle of the ice," said Tkachuk, who scored his 200th career point with his goal. "Monny was showing off his speed there going wide and he did an unreal move going that fast with a guy on him right over the glove."

"We looked tired. We didn't have a lot of energy. Execution was poor," coach Jared Bednar said. "It's a tough game coming back off a week road trip, three tough games, all big wins, coming in and playing a hungry team that's on top of their game."

MacKinnon had an assist on Donskoi's goal and played 14 of his team-high 29 shifts after the second period.

"He dominated the last 17 minutes," Bednar said. "I was double shifting him, he was buzzing and he ended up being part of two big goals for us and he almost had another one in overtime."

The Avalanche took an early lead on Graves' fifth goal in the first period, and the Flames tied it on Ryan's tip at 9:33 of the second. Nichushkin's fifth goal in eight games, and fifth of the season, 31 seconds later gave Colorado the lead again, but Tkachuk scored seven seconds into a power play to tie it.