Avalanche score 5 unanswered goals to come back and bury Flames

Nathan MacKinnon and Tyson Barrie each had a goal and an assist in the Colorado Avalanche's 5-2 victory over the Calgary Flames on Wednesday night.

The Colorado Avalanche were playing out the string a year ago. With 19 games left in this season they're battling for their first playoff berth in four years.

"It's a complete 180. We had nothing to play for last year at this time and this year we have everything to play," centre Nathan MacKinnon said. "We're going to try to keep it going." 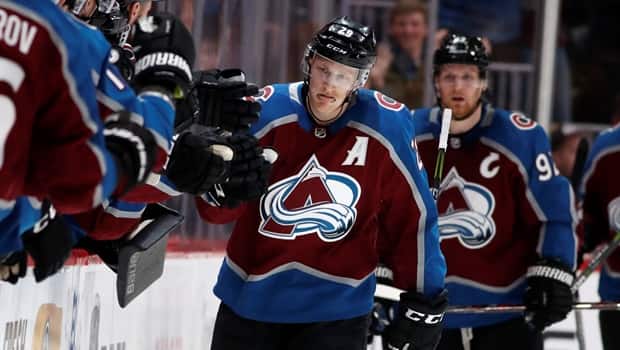 MacKinnon and Tyson Barrie each had a goal and an assist in the Avalanche's 5-2 victory over the Calgary Flames on Wednesday night.

Matt Nieto and Nikita Zadorov also scored, and Semyon Varlamov made 30 saves. The Avalanche have won 12 of 13 home games to tighten the Western Conference playoff race.

Colorado tied Calgary with 73 points and moved within a point of Anaheim and St. Louis for the second wild card.

"It's huge," Barrie said. "I don't think anybody picked us to be here. So here we are."

Mikael Backlund and Michael Frolik scored, and David Rittich stopped 29 shots for Calgary, which couldn't rally with its leading scorer out for the last 11:55.

Johnny Gaudreau was tossed after drawing a high-sticking penalty on Colorado's Blake Comeau. Gaudreau was given an embellishment minor on the play and then assessed a game misconduct after arguing with the officials from the penalty box.

"I don't know how you're supposed to react to getting hit in the face," Calgary coach Glen Gulutzan said of the embellishment call. "When I lost half the vision in my left eye getting a stick in the face, I throw my head back. He was flying, 20 mph, whatever he's going, and you get a stick in the face? Your head's going back. I don't get it. If I'm Johnny I'm mad, too.

"You're a guy that's six, eight penalty minutes a year? Come on."

Gulutzan said Gaudreau was tossed after he made a gesture to the official while sitting in the penalty box.

"You can't make a gesture because officials don't want to be shown up on TV," Gulutzan said. "That's kind of the unwritten rule. He just kind of waved his hand."

A classic reaction GIF. <a href="https://t.co/rLZNY2H6mZ">pic.twitter.com/rLZNY2H6mZ</a>

Colorado took control with a four-goal flurry in the second period that turned a 2-0 deficit into a two-goal lead. MacKinnon's 29th midway through the period started it, Zadorov tied it 1:08 later, and Barrie gave the Avs a 3-2 lead with his seventh goal at 12:41.

Nieto made it 4-2 with 1:18 to go when Carl Soderberg threaded a pass through two defencemen to the front of the net for an easy tap-in.

Duncan Siemens sealed it when he scored into an empty net with 17 seconds left in the game for his first NHL goal.

The Flames had a late power play and pulled Rittich for a two-man advantage but couldn't score. They have now fallen out of a playoff position with 17 games left.

"We were saying we controlled our own destiny," Calgary captain Mark Giordano said. "Now we are getting to that point where if we don't start stringing wins together we are going to need some help."

The Flames capitalized on a pair of Colorado turnovers to take an early two-goal. Backlund scored a short-handed goal at 14:19 of the first, and Frolik made it 2-0 with his 10th goal 2:41 into the second.

"Having a 2-0 lead, that's when you to try to put them away and then play sound defence," Flames forward Matthew Tkachuck said. "We let them back in the game right away."