Patrick Kane had two goals and two assists on Tuesday night as the Chicago Blackhawks jumped out to a 4-0 lead then persevered a furious late Calgary rally for a 5-3 victory over the Flames.

The NHL's most prolific scorer the past 10 years, Patrick Kane closed out the decade in style on Tuesday.

"You've got to play on good teams, you've got to play with good players, you've obviously got to be healthy, got to be consistent," Kane said about the accomplishment. "It's been a fun 10 years. Looking forward to seeing what the next decade brings."

After helping set up goals by Olli Maatta at 4:14 and Alex Debrincat at 5:35, Kane made it 3-0 at 12:44 of the first period when he gained the Calgary zone, cut across the slot and beat David Rittich with a wrist shot from 30 feet out. 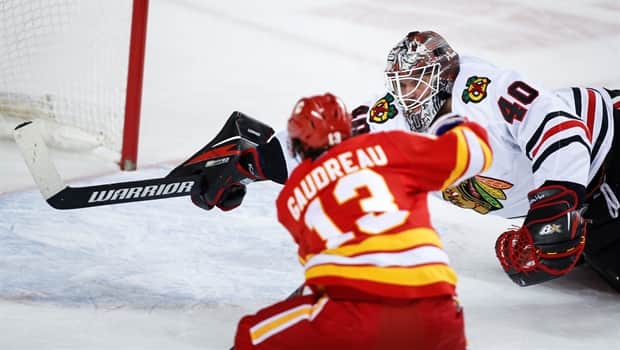 Lehner makes outstanding stick save in win over Flames

Kane rounded out the scoring with an empty-netter at 19:59 of the third that was his 22nd goal of the season and 378th of his career, moving him past Denis Savard and into fourth on the Blackhawks' all-time list, behind Bobby Hull (604), Stan Makita (541) and Steve Larmer (406).

"I'm sure that number would've been a lot higher had he spent his whole career in Chicago. Humbled and honoured to be mentioned in the same sentence as Denis."

It was an all too familiar start for Rittich and the Flames, who fell behind 3-0 for the second game in a row. On Sunday night, in a 5-2 loss at home to Vancouver, Calgary was down 3-0 less than 11 minutes into the game.

His play enabled the Flames to push late in the game and nearly tie it.

Calgary cut the deficit to 4-1 with six seconds left in the second period when Sam Bennett scored his first goal in 12 games.

The Flames played much better in the third, peppering Robin Lehner with 18 shots, but the Chicago goaltender stood tall.

Calgary eventually cut the deficit to two on Frolik's shorthanded goal at 15:30, off a Duncan Keith turnover. Then at 16:48, Sean Monahan knocked in a Matthew Tkachuk rebound.

The Flames poured on the pressure in the final couple minutes, but could not get the tying goal. After the buzzer went, Tkachuk laid on the ice, beside the Blackhawks net, for several seconds, after having the potential tying goal on a rebound bounce over his stick.

"I had one off a rebound from [Bennett], I had one on a tip, and then the one at the end, I don't know how the puck bounces like that," Tkachuk said. "I thought it was going to be a sure open net. It's frustrating."

The greater frustration in the Flames' dressing room was how they fell behind big once again.

"We've got to come out with a real aggressive mindset. I think we were a little bit passive the first few shifts and they took advantage of that," said captain Mark Giordano. "Down three, four goals in this league, although we made a good push, it's a tough mountain to climb."

Lehner, who finished with 41 saves, wins his sixth straight start to improve to 12-6-4. Among his 41 saves was a highlight-reel stop in the first period when he dove across to make a paddle stop off Johnny Gaudreau, who was set up for what looked like a sure goal by Derek Ryan.

"Screw the negatives here. Learn a little bit from them, but keep building on the positives because we just have to keep trying to get better and keep climbing in the standings. We want to make the playoffs," Lehner said.

Dylan Strome also scored for Chicago, which has won three straight and five of its last six.

Calgary is winless in its last five at the Scotiabank Saddledome (0-4-1).

"We're at the time of the year where we can't be satisfied with a good, close comeback. We need wins," said Bennett.