Sean Monahan scored for the fourth straight game, Cam Talbot stopped 46 shots and the Calgary Flames extended their winning streak to six straight games under interim coach Geoff Ward with a 5-2 win over the listless Arizona Coyotes on Tuesday night.

An early-season coaching change could have derailed Calgary's entire season.

Instead, it seems to have revitalized the Flames. Even on the second game of a back-to-back, there's no slowing them down.

Sean Monahan scored for the fourth straight game, Cam Talbot stopped 46 shots and the Flames extended their winning streak to six straight games under interim coach Geoff Ward with a 5-2 win over the listless Arizona Coyotes on Tuesday night.

"It's extremely gratifying that when we're playing the right way and everyone's buying in, that this is how successful we can be," Talbot said.

Calgary played the night before, but had the early energy, scoring two goals on its first four shots in the opening 4:03. The Flames kept on scoring, improving to 7-0-1 their past eight games following a six-game winless streak (0-5-1). 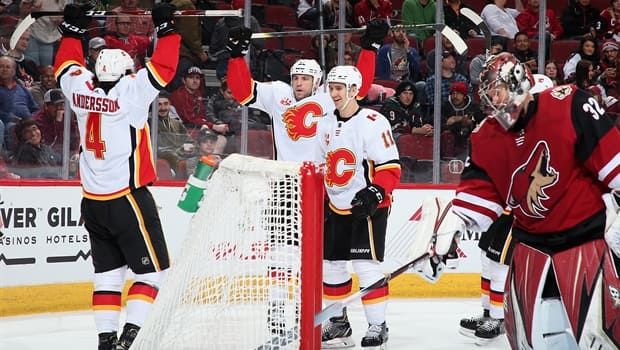 Michael Frolik and Zac Rinaldo each had a goal and an assist. Johnny Gaudreau and Milan Lucic also scored for Calgary, which closed within two points of the Pacific Division lead after an indifferent start to the season.

"You work hard, you work hard, you eventually get rewarded," Rinaldo said. "Things open up and things become a little easier to you. That's what's happening right now. Our whole team has worked really hard and the floodgates are opening."

The Coyotes had numerous good chances jump over their sticks before Jakob Chychrun scored in the closing seconds of the second period. Phil Kessel scored in the game's final minute and Antti Raanta allowed five goals on 29 shots, but didn't get much help from Arizona's defence.

"We had some chances, but we gave them two or three goals right off the bat and you're chasing the game from there," Coyotes coach Rick Tocchet said. "They scored on their chances and played a good road game."

Calgary had a big shakeup on Nov. 29, when Bill Peters resigned after it was disclosed he abused former players while coaching in Carolina and the minors.

The change in leadership has done nothing to slow the Flames, who won their fifth straight under Ward with a 5-4 overtime victory over Colorado on Monday night.

The Coyotes had been nearly as good, returning to the desert after a 3-1 road trip moved them into a tie with Edmonton atop the Pacific Division.

Arizona had to rally from a two-goal deficit to beat the Blackhawks in its previous game and found itself in a similar hole Tuesday night.

The Coyotes appeared to have an early goal, but Michael Grabner's shot hit inside of the post and bounced out.

'You play your way into those lucky bounces'

Frolik scored on the ensuing rush after an Arizona breakdown, taking a pass from Rinaldo, faking a shot, then beating Raanta with a backhander. Gaudreau scored two minutes later with a slap shot from the left circle when Raanta was screened by his own man after a face-off.

"At the beginning of the year, those are the ones that were going against us," Talbot said. "But I think you play your way into those lucky bounces."

Rinaldo made it 3-0 early in the third period, beating Raanta stick side with a one-timer from Frolik from the slot. Another Arizona breakdown, another Calgary goal, this one late in the second period when Monahan skated in alone and beat Raanta with a wrist shot from the left circle. Monahan has five goals with three assists during a seven-game point streak.

The Coyotes, after numerous failed scoring chances and bouncing pucks, finally beat Talbot with 10.6 seconds left in the second period on a wrist shot by Chychrun from the left circle.

Lucic put the game out of reach in the third period, redirecting a shot by Rasmus Andersson past Raanta.