Flames reclaim top spot in Pacific with win over Coyotes

Mark Giordano's goal and assist paced the Calgary Flames to a 5-2 win over the visiting Arizona Coyotes on Monday.

Production from the foot soldiers has helped lift the Calgary Flames out of a funk.

Austin Czarnik and Derek Ryan both scored Monday in a 5-2 win over the visiting Arizona Coyotes.

The two forwards had combined for a goal and three assists in Saturday's victory 5-4 against the Pittsburgh Penguins, which halted Calgary's four-game losing streak.

"We've had some depth scoring come through, which is important," Flames head coach Bill Peters acknowledged.

Mark Giordano and Michael Frolik each had a goal and an assist with Mikael Backlund adding an empty-net goal in Monday's matinee at Scotiabank Saddledome.

Defenceman Rasmus Andersson contributed a pair of assists for the Flames (36-16-7), who continue to duel with the San Jose Sharks for first place in the Pacific Division. 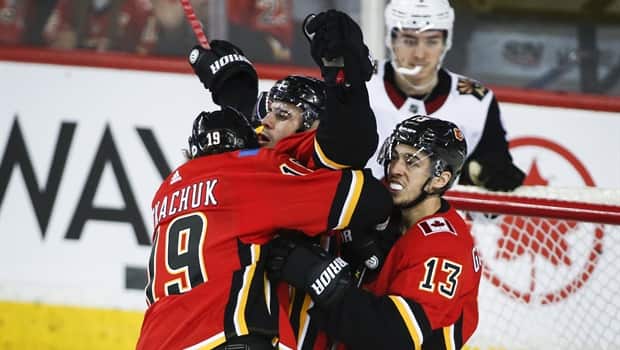 2 years agoVideo
1:47
Returning home from their longest road trip of the season, the Flames won their 3rd straight game against Arizona with a 5-2 win on Monday afternoon. 1:47

Calgary's Mike Smith posted 27 saves for the win against his former team. He started a third consecutive game for the first time since October and went 2-0-1 in that span.

"I feel more like myself in the net and it's paying off," Smith said. "It's a good time of year to be playing well."

Conor Garland and Jordan Weal countered for the Coyotes (26-28-5) chasing a wild-card spot in the Western Conference.

Backup Calvin Pickard stopped 29 of 33 shots in his third start for Arizona since he was claimed off waivers from the Philadelphia Flyers in November.

Arizona twice pulled even in the first 35 minutes Monday, but didn't rally again after Czarnik's goal at 16:18 of the second period and Frolik's at 5:48 of the third.

Calgary improved to 21-1-0 this season when leading after two periods.

"It seems liked any time we got momentum they got a goal right back," Coyotes head coach Rick Tocchet said. "We've got to make some plays. We need some guys to step up and score goals.

"It's only three-to-two at the start of the third. Still plenty of time to get back in the game."

A healthy scratch for nine straight games, Czarnik scored his second goal in as many games drawing in on the third line for injured winger James Neal (upper body).

Czarnik produced Monday's game-winner on a broken play, corralling the puck and shooting from his knees.

"Feels great. Being out that long, it's hard to adjust right away. Your breath is a little short probably," Czarnik said. "To be able to do that builds confidence and I just want to keep that going if I can.

"At the start of the year, I wasn't really finding those spots so I think now it's about getting more to the net and being in a spot to score goals."

The fourth-line centre also excels in the faceoff circle — winning seven of 10 on Monday — to get the puck to linemates Andrew Mangiapane and Garnet Hathaway.

"I thought they were really good again tonight. They've been good for awhile now," Giordano said.

"It seems like every shift they're in the offensive zone working the other team and grinding them. They're playing the right way, playing hard and getting rewarded."

In the absence of T.J. Brodie, Andersson shifted to Calgary's top defensive pairing alongside Giordano.

Peters said Brodie's injury was "minor" and expects the defenceman back in the lineup Wednesday against the New York Islanders.

The Coyotes play the second of back-to-back road games Tuesday in Edmonton before closing out a Western Canada swing Thursday in Vancouver.