Milan Lucic scored his first goal with Calgary, and it turned into the winner as the Flames held on to beat the Buffalo Sabres 4-3 on Thursday.

It took 28 games, but Milan Lucic finally has his first goal with the Calgary Flames.

Lucic scored early in the third period to open three-goal lead, and the Flames held on to beat the Buffalo Sabres 4-3 Thursday night.

"A little bit of relief. It's always nice to get the first one with your new team," said Lucic, who had been held to four assists this season. "My teammates all along have been sticking with me and building me up, because it took longer than I hoped and probably a lot of people hoped, but good on everyone for all of the support."

Tobias Rieder, Johnny Gaudreau and Sean Monahan also scored for the Flames, who are 4-0-1 in their last five games. Monahan also had an assist for his first multipoint game since Nov. 7.

Interim coach Geoff Ward improved to 3-0-0 since taking over for Bill Peters. 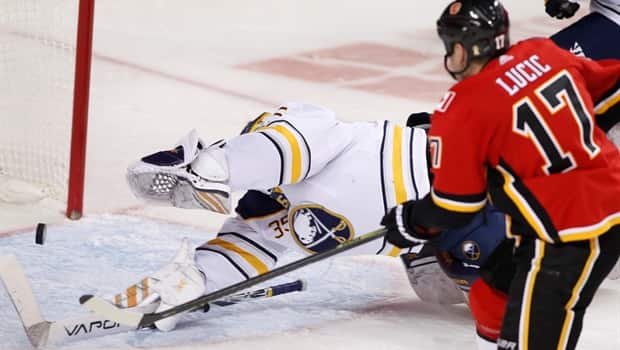 Lucic nets 1st goal with Flames in victory over Sabres

11 months ago
0:30
Milan Lucic scored his 1st goal with Calgary in the Flames 4-3 victory over the Buffalo Sabres 0:30

Sam Reinhart, Jake McCabe and Jack Eichel scored for Buffalo, which earned at least one point in its previous four games. Eichel extended his point streak to 11 games (10 goals, 10 assists).

"We really came out strong in the first and it got away from us a little bit in the second," Reinhart said. "We got away from our game plan a little bit. I think our forwards didn't do a good enough job of recognizing when we were turning pucks over in the offensive zone and our gaps weren't as good as a result, which gave them more time and space."

The Sabres' special teams let them down. Buffalo went 1 for 8 on the power play, gave up a short-handed goal and allowed Calgary to score once on its two chances with the man advantage.

"I feel like we didn't play well at all," Sabres wing Victor Olofsson said. "Started OK and then Calgary, I thought they took over. They were a lot better than us today up until the last few minutes of the game where we kind of woke up and we fought to the end, but couldn't get that last one in."

The Saddledome crowd roared at 3:58 of the third when Lucic finished off a passing sequence with Derek Ryan, who had two assists, and Dillon Dube for his first goal since last season's finale with Edmonton. Choruses of "Looo" echoed throughout the building as Lucic hugged his linemates in the corner after putting Calgary ahead 4-1.

"I'm more than excited that I was able to do it in front of the home fans. I think they stuck with me, throughout the whole season so far, never gave up on me," Lucic said.

After the game, it was the goal everyone wanted to talk about.

"He's one of those guys who's really well-respected, obviously, in this locker room and in the league," Monahan said. "So when a guy like that scores a goal like that, there's a lot of emotion that goes into it and we're all really happy for him."

Ward and Lucic spent seven years together in Boston going back to when Lucic broke in with the Bruins.

"He's a guy who comes to work every day. He's a real good pro, he's team-first all the time, so to see him finally break through, it was awesome," Ward said.

Another ex-Oiler who scored a big goal was Rieder. Playing his 400th NHL game, his short-handed breakaway goal at 11:18 of the second snapped a 1-all tie and gave Calgary the lead for good.

"It always feels good, especially on the PK," said Rieder, who has two goals after failing to score in 67 games last season. "It was at the right time of the game as well. It got us going."

The goals by McCabe and Eichel came in the last three minutes — Eichel's with the goaltender pulled — to set up a furious finish.

After successfully killing off three straight first-period power plays for the Sabres, the Flames tied it 1-all at 16:42 by converting their first man-advantage.

Set up by Monahan, Gaudreau skated to the faceoff dot and ripped a shot into the top corner for his sixth goal of the season.

Gaudreau, who scored 36 times last season, entered without a goal in 10 games and with just two in his past 24 games.

At 15:02, Calgary surged in front 3-1 when Mikael Backlund set up Monahan for a one-timer from a sharp angle. It was the seventh goal of the season for Monahan, who is coming off consecutive 30-goal seasons.