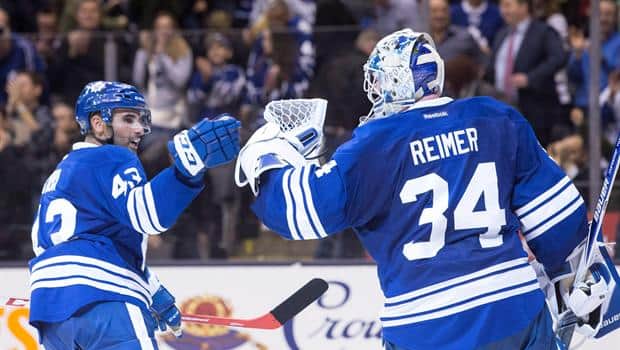 Asked if he had another 1,000 games in him, Babcock cited his contract with Toronto.

"Well I've got this year and seven more here. And then I'm going to stay for two more because the team's going to be that good."

If Babcock had had a hand microphone, he would have dropped it. Instead he wheeled around and returned to his lair after a pithy three-minute post-game wrap.

Right now it's baby steps for the Leafs, who rallied to defeat the New Jersey Devils 3-2 Thursday on P.A. Parenteau's shootout goal.

David Schlemko's disputed third-period goal had seemed destined to give the Devils a 2-1 win.

But Bozak beat Keith Kinkaid with a shot from the slot with 2:06 remaining to tie the game. His 10th of the season snapped a 15-game goal drought that dates back to Dec. 27.

Ever the teacher, Babcock simultaneously praised and challenged Bozak.

"I thought he had the puck all night tonight and was good ... I still think he can be way better. We need him to be consistently competitive like he was tonight."

As for the Leafs' challenged attack, Babcock said simply: "We don't finish great in general." But he said the team seems to be getting its confidence back, with Reimer playing a big part.

The Leafs challenged the Schlemko goal, a shot through traffic from inside the blueline at 6:27, arguing that Reimer was interfered with as Jordin Tootoo, tangled up with defenceman Morgan Rielly, cruised past the net. But the goal stood.

While proud of the milestone, he was clearly glad it came with a win.

For a while, he acknowledged it seemed like nobody was going to score. "Just a clogfest"' he said.

Said Reimer: "It's great to be able to grind it out and find a way to get two points in kind of a closed-off game."

The Leafs coach was the subject of a first-period video tribute to the sounds of "How You Like Me Now?" by The Heavy. The 52-year-old Babcock, likely steaming that his team had just given up the first goal, raised his hand in a brief acknowledgment from behind the bench.

The Devils, who defeated the visiting Rangers 3-2 Tuesday, arrived having have won five of their last six games. Toronto, despite winning 4-3 in overtime Tuesday in Boston, were mired in a 2-7-2 run.

It was a night of milestones for the Leafs, who outshot New Jersey 39-34. But not much excellence before a crowd of 18,947 .

In addition to Babcock's 1,000th, captain Dion Phaneuf appeared in his 800th game, winger Joffrey Lupul his 700th and Nazem Kadri his 300th.

"It's real nice to get the win for them," said Parenteau.

The Leafs used the occasion to mark the 40th anniversary of Darryl Sittler's 10-point night against the Boston Bruins. Sittler said he congratulated Babcock on his big night before the game.

"I said 'I'm sorry to steal your thunder, it's your 1,000th game.' I said 'Just win it for us," Sittler told reporters between periods.

Toronto outshot New Jersey early but the Devils went ahead on the power play at 4:16 when Josefson's shot handcuffed Reimer. Matthias, parked in front of goal, tied it up at 8:34 redirecting a nifty feed from Bozak just three seconds after Travis Zajac stepped out of the penalty box.

A short-handed New Jersey goal midway through the second was called off due to offside after Stephen Gionta beat Reimer on a two-on-one break.

Devils rookie forward Joseph Blandisi stood out in a blah game. The 21-year-old from nearby Markham, Ont., in just his 13th NHL outing, buzzed round the ice and assisted on the winning goal for his fourth point in five games.

"I think it was a valuable point to gain tonight," said Devils coach John Hynes. "It was a tough, hard-fought game."