Patrice Bergeron and Rick Nash each lit the lamp twice as the visiting Boston Bruins beat the Tampa Bay Lightning 6-2 to take the opener of their best-of-seven Eastern Conference semifinals series on Saturday afternoon.

Tuukka Rask tossed a broken skate blade up the ice in frustration, but hardly lost his cool.

"I didn't throw it at anybody," the Boston goaltender said Saturday. "If I threw it at somebody, I'd like to apologize, but I didn't. I just wanted to make sure that everybody saw that my blade was off."

Rask settled after allowing a second-period goal while trying to let officials know he had a problem with his left skate, finishing with 34 saves in the Bruins' 6-2 victory over the Tampa Bay Lightning in Game 1 of their best-of-seven Eastern Conference semifinal series.

Rick Nash had two goals and the Bruins' high-scoring line of Patrice Bergeron, David Pastrnak and Brad Marchand combined for 11 points, however Rask's ability to retain his composure after Mikhail Sergachev's goal trimmed Boston's lead to 3-2 was every bit as important.

"He was really good," Boston coach Bruce Cassidy said. "He gave us more than a chance to win early on when we were still trying to find our legs. We weren't executing very well. They were better than us, and then our top guys started finishing their chances." Bergeron also scored twice and had an assist on one of Nash's goals for the Bruins, who finished one point behind Tampa Bay for the Atlantic Division title, as well as the No. 1 seed in the East.

Marchand had a goal and three assists, while Pastrnak finished with four assists in a dominating performance.

A second goal by Marchand was waved off because of a cross-checking penalty on Pastrnak.

Dan Girardi also scored for the Lightning, who trailed by one goal entering the third period. 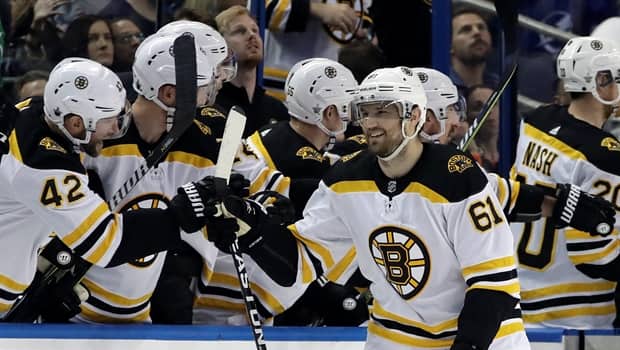 3 years ago
1:43
Rick Nash and Patrice Bergeron both scored a pair of goals, as the Boston Bruins beat up on Tampa Bay 6-2, in Game 1 of their Game 1 of their NHL Eastern Conference Second Round series. 1:43

Marchand and Bergeron hiked Boston's advantage to 5-2 before Jake DeBrusk added an empty-netter with 6:19 remaining.

The Bruins had just 10 shots against Lightning goalie Andrei Vasilevskiy over the last two periods, but made the most of the limited opportunities.

The Lightning, in the conference semifinals for the third time in four years, remain confident.

'We have a lot of experience'

"We have a lot of experience. Guys have been in this position before," center Tyler Johnson said. "It's one game. It doesn't matter if you lose a game 3-2 or 12-2. It's the same thing."

Rask won three of four starts against the Lightning during the regular season, with Tampa Bay's lone victory coming in the final meeting.

Pastrnak assisted on each of Boston's first three goals and added another on Bergeron's third-period goal, giving him 12 helpers in eight playoff games.

"They're good. ... They've played together for a while and they know where to find each other," Lightning coach Jon Cooper said of Boston's top line.

"They play both ends of the rink. They've played on Olympic teams, World Cup teams, and every time you look up and Canada is winning, usually Marchand or Bergeron had something to do with it," Cooper added. "They've done it for a long time."

Nash, meanwhile, got his second and third goals of the postseason, scoring on the power play at 17:11 of the opening period and 12:33 of the second to put the Bruins up 3-1. Sergachev countered on the power play, trimming Tampa Bay's deficit to 3-2.

"We lost 6-2, so it doesn't matter how we feel about how we played," Cooper said. "We're going to wake up in the morning, somebody is going to look at the score and say Tampa is down 1-0. Is there stuff we can build off this game? No question. But they got six, and in the end we have to raise the level of our game to get back in this series."