David Pastrnak had three goals and the Boston Bruins took control by scoring three times in a span of 1:39 during the second period to beat the Philadelphia Flyers on Sunday in an outdoor game on the shore of Lake Tahoe.

After going through the handshake line following a lopsided win, the Boston Bruins all gathered at centre ice for one last team photo.

It truly was a picture-perfect day for the Bruins at Lake Tahoe.

David Pastrnak had three goals and Boston took control by scoring three times in a span of 1:39 during the second period to beat the Philadelphia Flyers 7-3 on Sunday in a scenic outdoor game.

"It was beautiful," Pastrnak said. "I think personally playing in both conditions, the sun and the dark was great. The dark is beautiful, too. You get to play outside. Overall it was an unbelievable experience." 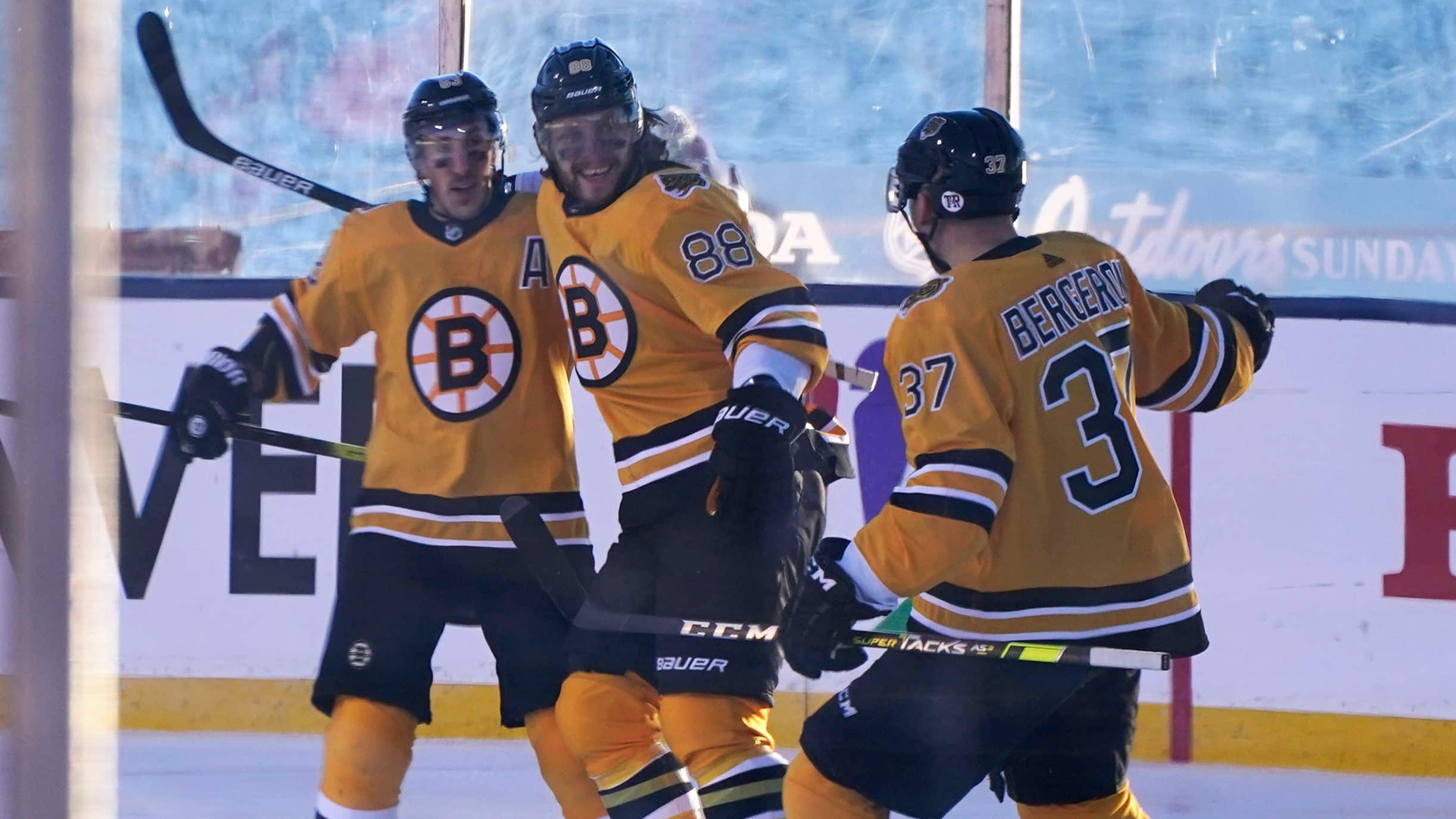 8 days ago
2:05
The Bruins scored five straight goals and Pastrnak had a hat-trick as Boston pounded Philadelphia 7-3 in the Lake Tahoe outdoor game. 2:05

After a delay-filled opening game of the weekend between Colorado and Vegas because of bright sun that made for poor ice conditions, the game Sunday went off with fewer hitches. The Bruins' high level of play matched the picturesque setting with the lake and snow-covered mountains in the background.

Pastrnak scored in the opening minute of the first two periods and then again late in the third to give him his second hat trick in three games against the Flyers this season. Charlie Coyle, Trent Frederic and Nick Ritchie scored in succession late in the second to give Boston five wins in five games this year against Philadelphia.

"Hats off to the NHL and everyone who made this happen. It was really special," said defenceman John Moore, who had two assists. "I've played in some outdoor events and this one blows those out of the water."

'Blinded by the sun'

Joel Farabee, Sean Couturier and James van Riemsdyk scored for the short-handed Flyers, who have six players on the COVID-19 list. Carter Hart allowed six goals on 23 shots in the first two periods and has now given up 20 goals in four losses to Boston this season.

With the bright sun out again Sunday, the NHL moved the game time to 4:30 p.m. PST to avoid the problems that led to a delay of more than eight hours on Saturday between the first and second periods.

The start of this game was delayed about 20 more minutes because there was some glare on the ice from the sun, and players said it was hard to see in the first period.

"It wasn't easy, obviously. The hardest part was probably the first with all the sun," Couturier said. "Being blinded by the sun in some places, it was kind of dangerous sometimes. But it was the same thing for both teams."

But the ice was in good shape and the scenic setting that brought the NHL to the shores of Lake Tahoe to host games on a makeshift rink on a golf course was in full bloom. The sun began setting late in the first period over the Sierra Nevada for a breathtaking scene.

There were plenty of goals as well, starting with Pastrnak's 34 seconds into the game.

The Flyers responded with two goals and took the lead when Couturier came out of the penalty box and took advantage of McAvoy's broken stick.

McAvoy atoned when his slap shot tied the game less than a minute later.

The game then got out of hand in the second starting with Pastrnak's goal 46 seconds into the period.

"In the second period, a couple of shifts got away from us," Flyers coach Alain Vigneault said. "Such a strong team, they capitalize on opportunities from start to finish."