Ottawa Senators forward Bobby Ryan will be away from the team while taking part in the NHL/National Hockey League Players' Association assistance program. The 32-year-old has one goal in 16 games this season.

Veteran forward, who left practice early Monday, has 1 goal in 16 games this season

Ottawa Senators forward Bobby Ryan will be away from the team indefinitely while taking part in the NHL/National Hockey League Players' Association assistance program.

The NHL and NHLPA made the announcement Wednesday and said they would have no further comment.

Ryan, 32, did not play for Ottawa in a win in Detroit on Tuesday.

Postmedia reported he left practice early on Monday because he was not feeling well, according to first-year head coach D.J. Smith.

"Bobby is an important member of the Ottawa Senators family and he has our full support as he tends to this matter," Senators general manager Pierre Dorion said in a news release, adding the team had no further comment.

The No. 2 overall pick by Anaheim in the 2005 draft, Ryan has one goal and four points in 16 games this year. 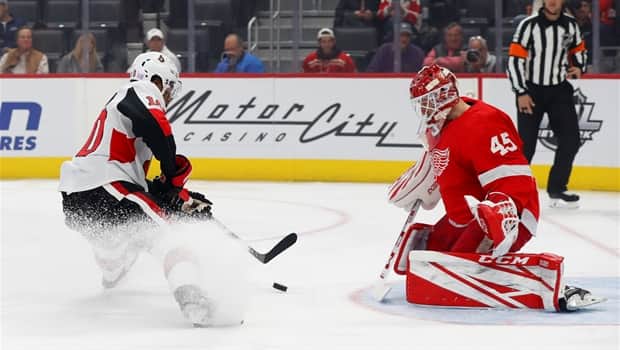 1 year agoVideo
2:07
Anthony Duclair scored a pair of goals and added an assist helping the Ottawa Senators to a 4-3 win over the Detroit Red Wings. 2:07

The player assistance program was first offered in 1996 and is designed to help players and their families treat health issues, including substance abuse.

Ryan credited former Senators head coach Guy Boucher, a psychology major, with helping him work a difficult 2016-17 season when he posted 25 points in 62 regular-season games, a career low in his 12 NHL campaigns.

"I had some things that needed to get settled away from the rink, I'll just put it that way," Ryan, a native of Cherry Hill, N.J., told the National Post in October 2017. "I was having a very tough time with it and he helped me a lot through it, really.

"When you compound it, media, and with not scoring and all that kind of stuff, it's pretty easy to go to a pretty dark place."

Ryan's tough upbringing has been well-documented, how his father, Bob, physically abused his mother and then, while on the lam, dragged Bobby to California and changed their last name from Stevenson.

Ryan is the highest-paid player on the Senators with a seven-year, $50.8-million US contract expires after the 2021-22 season.

Ottawa acquired Ryan in a trade with Anaheim in July 2013, on the same day they lost franchise player Daniel Alfredsson to the Detroit Red Wings in free agency.