Bob Cole is now getting the send-off he deserves

Bob Cole's farewell season calling games on Hockey Night in Canada has been extended to include the Toronto-Montreal regular-season finale. It's a much better way for Cole to complete his 50-year run as one of the game's leading play-by-play men, writes Tim Wharnsby.

This was supposed to be Bob Cole's final Saturday on the job, calling the New York Rangers game against the Toronto Maple Leafs at Scotiabank Arena.

But the brass at Sportsnet did the right thing last week and extended his farewell season with an additional six games. His final Hockey Night in Canada broadcast now will be the regular-season finale between the Leafs and Montreal Canadiens at the Bell Centre on April 6.

This is a much better way for Cole to complete his 50-year run as one of the game's leading play-by-play men.

"I guess so," the 85-year-old Cole said from his home in St. John's. "It's a pretty good way to go out. There's such a tradition between these two teams and lots of history. Of course, the city of Montreal is a special place. I always enjoyed calling games at the Forum and now the Bell Centre."

Cole, however, doesn't like to discuss his retirement. He doesn't want to become yesterday's man. This farewell season has been awkward for him.

He would like nothing more than to keep calling games past the regular season's final weekend. It hurt last spring when he was left out in the cold from his first Stanley Cup playoffs since his Hockey Night in Canada debut. 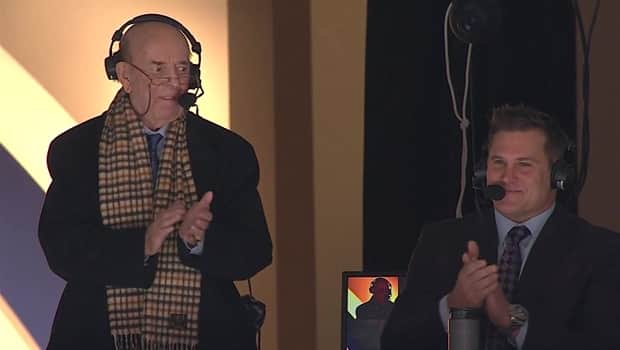 2 years ago
0:30
The Edmonton Oilers and their fans gave Bob Cole a standing ovation as he continues his 50th and final season on Hockey Night in Canada 0:30

Cole's first play-by-play assignment was for CBC Radio on April 24, 1969, when Jean Beliveau clinched the Canadiens semifinal in double overtime against the Boston Bruins at the Garden. And while most Canadians fondly remember Foster Hewitt's call of Paul Henderson's Summit Series-winning goal against the Soviet Union, it was Cole who broadcast that moment on the radio.

Cole later moved to television and provided a strong link from Foster Hewitt and Danny Gallivan on Hockey Night in Canada to Chris Cuthbert and now Jim Hughson.

But Cole is much more than a broadcaster. Sure we love his calls — his "oh, baby," his "they're going home." My favourite was at the 2002 Winter Olympics in Salt Lake City, when Joe Sakic scored on a breakaway to make it 5-2 over the United States in the gold-medal final.

He later added, "Now after 50 years it's time for Canada to stand up and cheer. Stand up and cheer everybody. The Olympics Salt Lake City, 2002, men's ice hockey, gold medal: Canada!"

Cole grew up the son of a warden at Her Majesty's Penitentiary in St. John's. He was a pretty good inside left forward on his school's soccer team and a sound hockey player. A leg injury on the soccer pitch almost cost him his leg when he was young.

But he recovered. He still competed. He later became a bellboy on the 180-passenger Fort Amherst ship that travelled from St. John's to New York City, taking food orders and delivering meals to the captain and other VIPs on the ship.

He was a pilot. Once as a Canadian Air Cadet his plane's carburetor froze during his first solo training flight, but he deftly landed his plane in a bush. There were some nervous moments in bear country, but he was rescued.

He skipped Newfoundland and Labrador to the Brier in 1971 and again in 1975.

Watch Cole compete in his "other" sport: 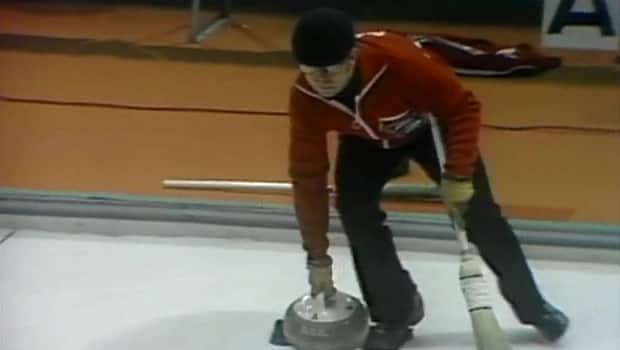 4 years ago
0:29
While most people know Bob Cole for his work as a hockey broadcaster, the member of the Order of Canada was also a competitive curler. 0:29

He also loved golf. Before he became the renowned hockey broadcaster he called some of the action of the 1969 Canadian Open at Pine Grove near Montreal for CBC television. Tommy Aaron and Sam Snead wound up tied after 72 holes. CBC didn't broadcast the Monday playoff, won by Aaron. But Cole stayed and took in the action.

He saw Sinatra at two concerts, once in Pittsburgh and the other in Montreal.

"I sat 15 rows from the stage on the aisle," Cole said. "At the end, he came right up the aisle. He stopped in front of me and shook the hands of a couple of ladies and then glanced at me, made eye contact and nodded his head. It was an intimate moment.

"They called him Blue Eyes. Have you ever seen anybody with eyes that shade of blue?"

Creating excitement from the booth

Cole is a national treasure. He often has told the story of how he met Hewitt in his Toronto office one day and received an invaluable piece of advice. "Flow with the game and help create the excitement for the fan watching," he told Cole.

And that's how Cole calls a game. You could be reading the newspaper or have your head buried in your laptop, but you know from the inflection of Cole's voice when to look up.

This week, Cole watched the Leafs play the New Jersey Devils on TV and he'll watch their game against the Florida Panthers on Thursday. He viewed the Rangers play the Vegas Golden Knights on Sunday and flipped back and forth between Toronto-New Jersey and Rangers-Anaheim on Tuesday.

"I always try to watch the teams I'm doing on Saturday as much as possible during the week," he said. "It'll come in handy this week because I haven't done a Toronto game in years."

In an ideal world, maybe the Maple Leafs and Canadiens will meet in the playoffs this spring. That hasn't happened since 1979. Maybe Cole could be given one final playoff game if Toronto and Montreal match up.

It would be an ending a legend like Cole deserves.