Penguins push Jackets to the brink with OT win

Jake Guentzel had a hat trick, including a goal at 13:10 of overtime, to lift the Pittsburgh Penguins to a 5-4 victory over the Columbus Blue Jackets on Sunday night and give them a 3-0 lead in their first-round playoff series. 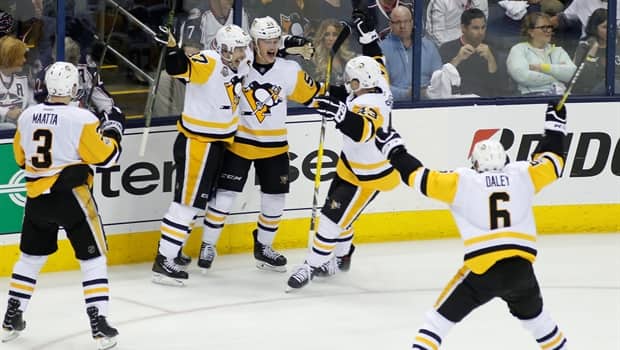 With help from Sidney Crosby, Jake Guentzel and the defending champion Pittsburgh Penguins are on the verge of sweeping their opening playoff series against Columbus.

Crosby played keep-away with three Blue Jackets players behind the net before passing the puck to a perfectly positioned Guentzel in front during overtime on Sunday night.

The 22-year-old rookie capped his hat trick by slipping it past Sergei Bobrovsky at 13:10 of the extra period for a 5-4 win and a 3-0 advantage for Pittsburgh in the playoff series.

The Penguins will try to finish off Columbus on Tuesday night.

The loss was deflating for the Blue Jackets, who scored 11 seconds into the game and jumped out to a 3-1 lead after the first period only to let the Penguins climb back in, as veteran goalie Marc-Andre Fleury regained the form that frustrated Columbus in the two previous games. 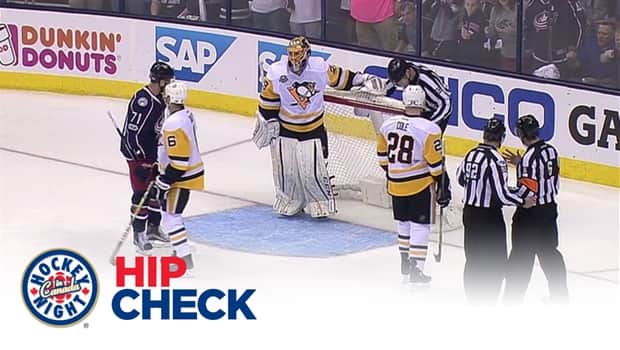 4 years ago
0:36
Werenski put Columbus up 3-1, despite Fleury's best attempts to hide the puck that was already trapped inside the net 0:36

Fleury, forced into action for the injured Matt Murray, had 33 saves in another wild and hard-hitting matchup between the Metropolitan Division rivals.

The biggest save might have been a shot by Brandon Dubinsky that Fleury took off his mask seven minutes into the overtime.

Guentzel earned the first playoff hat trick for a Pittsburgh rookie. The accomplishment was still sinking in after the win.

Bryan Rust and Evgeni Malkin added goals for the Penguins. Malkin and Crosby each had two assists.

Werenski, a 19-year-old rookie defenceman, also took a puck to the face on a shot by Phil Kessel that opened a gash on his right cheek in the second period. He played a couple shifts in the third period with a full facemask, but his eye swelled shut and he had to sit out the rest of the game. 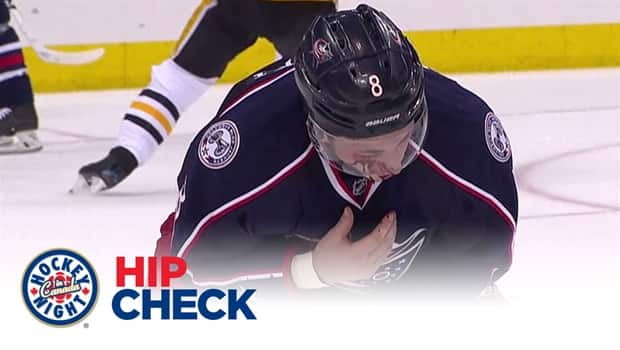 4 years ago
0:55
Zach Werenski took a puck in the face moments before Evgeni Malkin tied the game. 0:55

After only scoring two goals combined in the first two games of the series, Columbus scored three goals in just over six minutes of the first period.

But the Penguins regained their composure and pushed back hard during the second period to tie the score at 3-3.

At 5:21, Rust got his second goal of the series when he tipped Brian Dumoulin's shot through Bobrovsky's pads. Then, with Werenski flat on the ice bleeding profusely from the wound on his face, Malkin tied the score at 13:25.

Guentzel scored Pittsburgh's first goal in the opening period and got another in the third period before beating Bobrovsky for the winner in OT.

"We had to stay with it," Crosby said. "We got some unfortunate bounces there a couple times. We just tried to stay in it and give ourselves a chance. [Fleury] makes a big save in overtime that probably changed the game."

The Blue Jackets, who are in the playoffs for just the third time in their 17-year history, trail 3-0 in the series.

"Desperate," Dubinsky said. "We have no other choice. We've got to come to work tomorrow, try to get better and make sure we come out with same excitement we have in the first three games, and just try to sustain it for 60 minutes."