Disorderly conduct and disruptive behaviour charges against Toronto Maple Leafs star Auston Matthews were dismissed on Wednesday, according to court documents. The charges stemmed from an incident involving Matthews in his hometown of Scottsdale, Ariz., on May 26.

Leafs star had been facing charges in hometown of Scottsdale, Ariz.

The charges stemmed from an incident involving Matthews in his hometown of Scottsdale, Ariz., on May 26.

"I just want to reiterate again just how sorry I am for my actions, my behaviour," Matthews said Friday. "I never meant to cause any distress to this woman. I can assure you I've learned from my mistakes and my actions, and it's something for myself to just strive every day to be better in every aspect of my life."

Arizona law allows a person accused of a misdemeanor and the injured party to settle the matter directly. The City of Scottsdale confirmed Thursday that the matter was settled between the parties and the criminal matter was dismissed.

Matthews, 22, was not arrested in relation to the incident.

When news of the incident broke during training camp in September, Matthews said that he regretted causing a distraction as the Leafs were preparing for the regular season.

"It's not something that I think any of us really wish we were talking about [on Sept. 25]. Unfortunately, it's the situation we're in," said Matthews.

"I regret any of my actions that would ever put a distraction on the team or distress any individual." 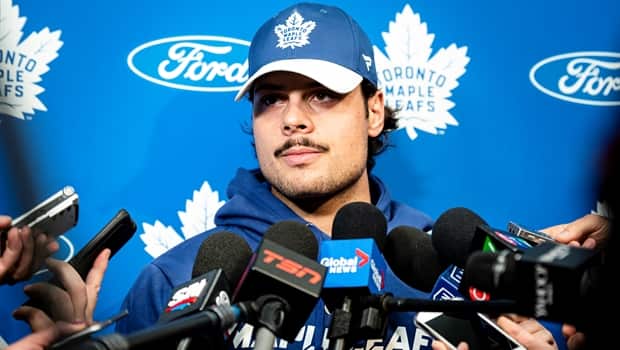 1 year agoVideo
4:07
Maple Leafs star Auston Matthews comments on the alleged May incident in his hometown of Scottsdale, Ariz. 4:07

According to the police report, a female security guard at a condo complex in Scottsdale made the complaint after she said Matthews and a group of males tried to open her vehicle as she sat inside doing paperwork at 2 a.m.

The complainant said she got out her car and confronted Matthews, who she said appeared to be intoxicated. She said Matthews said he thought it would be funny to see how she would respond.

The report states that, as Matthews walked away, he dropped his pants, bent over and grabbed his buttocks, though the complainant said he appeared to keep his underwear on.

The report says surveillance video shows a male subject walking toward the complex elevators with his pants around his ankles.