Habs hold off Coyotes to spoil Galchenyuk's return to Montreal

Defenceman Mike Reilly scored in the third period and Carey Price made 30 saves as the Montreal Canadiens beat the visiting Arizona Coyotes 2-1 on Wednesday night in Alex Galchenyuk's return to Montreal.

There was a pair of unlikely heroes for the Montreal Canadiens Wednesday night as Claude Julien praised his video replay coaches for being instrumental in the team's victory.

It was an overturned offside call late in the third period that helped the Canadiens hold on for a 2-1 victory over the visiting Arizona Coyotes.

Seconds after Alex Galchenyuk appeared to have scored the equalizer in his return to Montreal, Canadiens video replay coaches Mario Leblanc and Eric Gravel alerted Julien to an offside earlier in the play.

"Every time the puck crosses the blue line, they check the replay," said Julien. "Good work on their part. They deserve all the credit because I didn't see it. They said it was offside and they showed it to me. That saved us.

"I saw white between the puck and the blue line."

With the Coyotes on the power play, Galchenyuk beat Carey Price with a no-look shot with 3:39 left in the game. But the puck had just barely left the zone earlier on the play when Arizona's Alex Goligoski failed to keep it in on a pass back to the point. 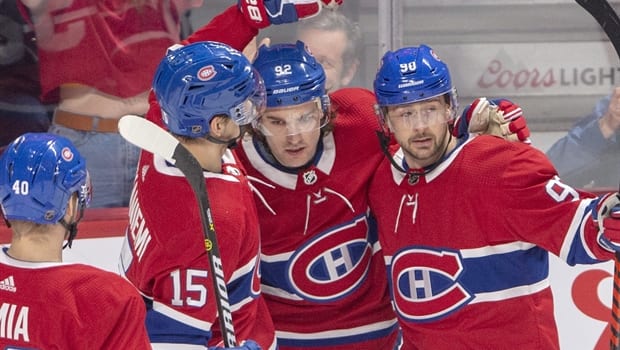 With Galchenyuk celebrating in the arena he called home for six seasons, the Canadiens challenged the play for offside and the goal was overturned.

If the challenge had failed, Montreal would have been given a two-minute penalty.

"From the bench it was tough to see," said captain Shea Weber. "The guys on the ice said it was possibly offside. That was the difference in the game right there."

Added Price, who made 30 saves for his 20th victory of the season: "I didn't even realize it was offside. That's a good eye."

Price has stopped 133 of the last 137 shots he's faced on a four-game personal win streak.

The Canadiens (28-18-5) led after defenceman Mike Reilly scored the winner with a one-timer from the point at 4:48 of the third.

Julien's men have won five of their last six games as they enter the all-star break, followed by their bye week. Montreal's next game is Feb. 2.

Conor Garland scored the lone goal for the Coyotes (23-23-4), who were playing the second game of a back-to-back set after a 3-2 victory in Ottawa Tuesday night.

Calvin Pickard, in his Coyotes debut, stopped 22-of-24 shots.

It was Galchenyuk's first game in Montreal since being traded to the Coyotes for Max Domi on June 15. The 24-year-old was honoured with a video tribute during a commercial break in the first period. Both Galchenyuk and Domi were held pointless.

The Canadiens got on the board first when their league-worst power play scored against Arizona's league-best penalty kill.

After a scramble in front of Pickard's goal, Tomas Tatar jumped on a loose puck and fed Jonathan Drouin, who snapped a nine-game goalless drought with a wrist shot at 9:29 of the first period.

The home team could have easily scored a second or third goal but Pickard was up to the challenge.

Pickard made two big saves to start the second period - point blank on Joel Armia in the slot with his mask before denying Victor Mete with the outstretched pad seconds later. The 26-year-old later stopped Armia on the breakaway.

"Credit to our guys," said Pickard, who was playing his 99th NHL game. "We battled so hard. Back-to-back, coming into a tough environment and we were right there until the end. These guys deserve a lot of credit.

"It was my first game in a while and the guys made it easy on me."

Garland thanked his goalie by levelling the score at 18:28 of the second frame while playing with the man advantage before Reilly netted the winner in the third.