Ducks spoil the party in Nashville with OT win

Corey Perry's shot deflected in off Nashville defenceman P.K. Subban's stick 10:25 into overtime, and the Ducks snapped the Predators' 10-game home playoff winning streak with a 3-2 victory Thursday night that evened the Western Conference final at 2-2.

Corey Perry scores in extra frame to even series 2-2 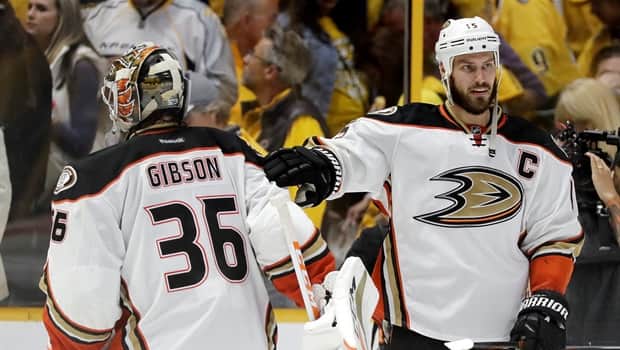 Game Wrap: Ducks edge Predators in overtime to even series

Corey Perry just keeps finding the net in overtime this post-season, and his third goal in extra time helped the Ducks tie the Western Conference final at 2-2.

"I was just trying to create traffic or create a balance and create havoc in front," Perry said. "And that's what they say in overtime: You throw it on net, never know what's going to happen."

Perry matched Mel Hill (1939) and Maurice Richard (1951) for the most OT goals in a single post-season in NHL history. Perry also tied Teemu Selanne's franchise record with his ninth winning goal and moved past Selanne for sole possession of second in Ducks' history with his 36th post-season goal.

John Gibson made 32 saves for Anaheim, which was the last team to beat the Predators in Nashville in the playoffs last spring in Game 4 of their first-round series. The Predators had matched the 1997-98 Detroit Red Wings with their 10-game winning streak but missed matching Colorado's 11-0 playoff run in 1996-97.

Rickard Rakell and Nick Ritchie staked the Ducks to a 2-0 lead. But Subban scored with 6:27 left, and Filip Forsberg tied it with 34.5 seconds remaining in regulation with his fourth goal in four games.

Perry ended the second overtime in the series with a goal originally credited to Nate Thompson. Perry stopped the puck as the Predators tried to clear and shot from the right boards at a severe angle. Subban stuck out his stick trying to poke-check the puck away only to re-direct it past goalie Pekka Rinne.

"They caught a lucky bounce tonight on the redirect that ended up being a difference maker," Nashville coach Peter Laviolette said.

The goal finally was credited to Perry after the Ducks appealed to the NHL.

"I don't really care at this point as long as it goes in the net," Thompson said.

The Ducks have matched their franchise record with their fourth overtime win this post-season. They are 4-1 with the lone loss in this series opener to Nashville. They went 4-0 in OT on their way to winning the 2007 Stanley Cup.

"We thought we were outcompeted last game, so it feels good to take care of business and get a split on the road and now it's best out of three," Ducks centre Andrew Cogliano said.

The Ducks killed off five penalties, including a 5 on 3 in the third. But the Predators outshot them 11-5 in the third with the late flurry forcing overtime.

Subban scored off a blast from the blue line to revive the standing-room only crowd with Forsberg helping screen Gibson. Forsberg, who started Nashville's comeback win in Game 3, ensured overtime crashing the net with two teammates and smashing the puck across the line.

"Obviously, we're disappointed," Forsberg said. "I don't think we showed up in the first, and then after that we played better. It's tough. They're a good team. We can't give them a two-goal lead like that."

Nashville brought out inaugural American Idol winner Kelly Clarkson as the latest big name to sing the national anthem, and rock group Kings of Leon stirred up the crowd by waving from the bandstand in Music City's latest show of star power. NHL Commissioner Gary Bettman also was on hand with a franchise-record 17,423 fans.