Flames swept out of playoffs by Ducks

The Anaheim Ducks swept Calgary from the NHL playoffs with a 3-1 win Wednesday, making the Flames the first team eliminated from this year's post-season. 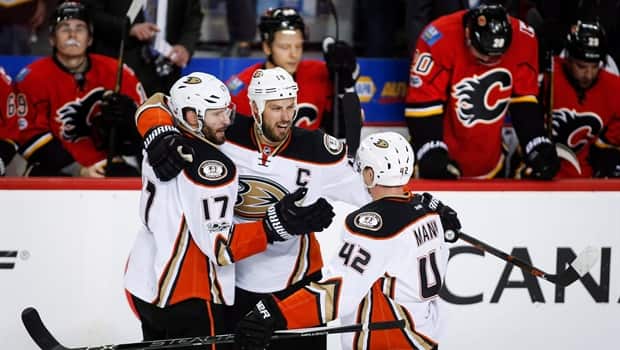 Game Wrap: Flames eliminated from playoffs after being swept by Ducks

The big moments were never too big for the Anaheim Ducks in their playoff series win over the Calgary Flames.

When Calgary threatened to gain momentum, Anaheim's leadership and poise prevailed to carry the Ducks to a four-game sweep of the Flames in their best-of-seven Western Conference quarter-final.

Anaheim ousted Calgary with a 3-1 win Wednesday at Scotiabank Saddledome.

The Ducks now have the luxury of rest and recovery ahead of their conference semifinal. They await the series winner between the Edmonton Oilers and San Jose Sharks tied at 2-2.

"We move onto the next one and we know that it's only going to get tougher," said head coach Randy Carlyle, who turned 61 on Wednesday.

Calgary was the first team eliminated from this year's playoffs.

Patrick Eaves and Nate Thompson scored for the visitors on their first five shots of the game, with Getzlaf adding an empty-net goal.

Carlyle started John Gibson again after replacing him in the second period of Game 3 with Jonathan Bernier. The return on that vote of confidence was Gibson's 36 saves.

Sean Monahan scored his fourth power-play goal in as many games for Calgary.

Early switch in net for Flames

It was a short night for starter Brian Elliott, who was pulled for Chad Johnson after giving up a soft goal at 5:38 of the first period.

Anaheim scored on Johnson 68 seconds later in his NHL playoff debut. He finished the game by turning away 20-of-21 shots.

The Ducks opened the series with a pair of 3-2 wins at home before storming back from a three-goal deficit to win 5-4 in overtime Monday at the Saddledome.

The Flames outplayed them the majority of Game 2, but a lucky deflection and a couple of undisciplined minors by Calgary late in the game allowed the Ducks to pull out the win.

Trailing 4-1 late in the second period in Game 3, the Ducks score four unanswered goals en route to their biggest comeback in franchise history.

Getzlaf and Corey Perry, the holdovers from Anaheim's Stanley Cup victory in 2007 and Olympic gold medallists, steered the Ducks through choppy waters.

"We've been in some games where we've been able to experience those moments when there's high pressure," Ducks forward Andrew Cogliano said.

"When you have your leaders as guys who have played World Cups, Olympics, Stanley Cup games, it helps.

"Those guys have been there, they've experienced it and they know what to do in those situations. The team followed suit."

Anaheim's two quick goals Wednesday drained the Flames of confidence that was already dented from their Game 3 collapse.

"You realize how slim the margin is between winning and losing," Flames captain Mark Giordano said.

"You have to tip your hat to the other team sometimes. But we have nothing to be ashamed of. We battled right to the bitter end."

Anaheim outscored Calgary 9-2 even-strength in the series and held Flames winger Johnny Gaudreau without a goal.

As good as Elliott was the last half of the season in getting Calgary to the playoffs, he gave up soft goals in the second, third and fourth games of the series.

"It's just tough to swallow, especially in an elimination game," Elliott said. "It's not how you imagine things happening."

The Ducks haven't lost in regulation in 18 games dating back to March 10.

Finishing off Calgary early opens the door for the return of Anaheim's injured defencemen, although 21-year-old Shea Theodore and 23-year-old Brandon Montour performed well in their absence.

Ducks defenceman Sami Vatanen (upper body) participated in the morning skate and Cam Fowler (knee) skated by himself for the third time in as many days.

Carlyle said Fowler would be out two to six weeks when he collided with Giordano in a regular-season game April 4.