The Toronto Maple Leafs selected American forward Auston Matthews with the first overall pick in the NHL Draft. The 19-year-old from Scottsdale, Ariz., spent this past season playing for the ZSC Lions in the Swiss National League. 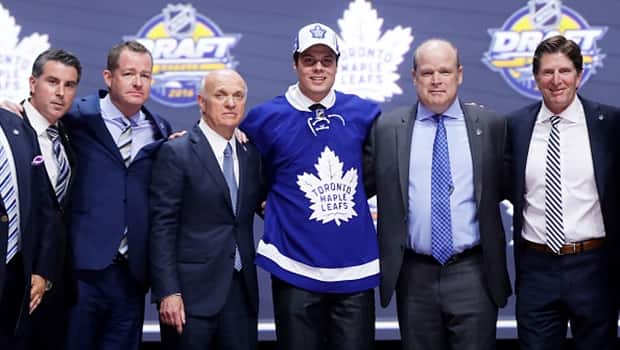 5 years agoVideo
0:30
The Arizona product is now a Maple Leaf as Toronto has their long awaited first line center 0:30

A feisty crowd welcomed highly touted American centre Auston Matthews and a trio of Finnish players to the NHL on Friday night as foreign talent dominated the top of the NHL draft.

As expected, Matthews went first to the Toronto Maple Leafs followed by Patrik Laine to the Winnipeg Jets.

But fellow Finn Jesse Puljujarvi, who had been expected to go third to Columbus, remained on the board as the Blue Jackets opted for Cape Breton Screaming Eagles forward Pierre-Luc Dubois.

That allowed Edmonton to scoop up Puljujarvi, who, like Laine, played in the Finnish Elite League last season.

The 18-year-old Matthews, an Arizona native who played professionally in Switzerland last season, is the first American to top the draft since Chicago took Patrick Kane in 2007. Laine ties Kari Lehtonen as the highest Finn ever drafted.

Dubois, a native of Rimouski, Que., celebrating his 18th birthday Friday, and Penticton Vees centre Tyson Jost, a St. Alberta, Alta., native taken 10th by Colorado, were the only Canadians to go in the Top 10. (Although Sweden's Alex Nylander, of the Mississauga Steelheads and picked eighth by Buffalo, was actually born in Calgary.)

Nylander's pick matched that of his older brother William, who was taken eighth overall by Toronto in the 2014 draft.

Matthews had hardly left Buffalo's First Niagara Center stage when the trades began: Montreal sent forward Lars Eller to Washington for 2017 and 2018 second-round picks and the Canadiens acquired Andrew Shaw from Chicago for a pair of second-round picks.

The Flames then got their goalie, acquiring Brian Elliott from the St. Louis Blues for the No. 35 draft pick and a conditional third-round pick in 2018.

The Winnipeg Jets also selected Logan Stanley of the Spitfires with the 18th pick, acquired from Philadelphia.

But the spotlight was on Matthews, seen as the franchise centre Toronto has been missing since Mats Sundin.

"Hockey's a team game so there's really no saviour," Matthews told reporters. "I want to be an impact player. I believe I can be a franchise centreman, a No. 1 centre in the NHL, so that's my ultimate goal."

Poor showing during the regular season made for a Canadian logjam atop the draft with teams north of the border holding five of the first six picks and seven of the Top 12.

In all, 211 players will be selected, with rounds two through seven scheduled for Saturday.

The Leafs opened up proceedings for the first time since 1985 when they selected Wendel Clark, who went on to become a franchise icon who could decide games with his stick or fists.

The draft kicked off with a rousing ovation for Buffalo Sabres owner Terry Pegula — after fans in the arena booed most of the other NHL teams during the traditional pre-draft roll call, with the loudest derision reserved for Toronto.

But a sizable contingent of Leafs fans then made their voices heard.

Mark Hunter, the Leafs' director of player personnel, announced the first overall selection to boos. But they turned to cheers when he announced Matthews.