'Hockey stands with you': Condolences, support pour in for Humboldt Broncos

Condolences and offers of help are pouring in from the hockey community for families of the Humboldt Broncos hockey team, which was involved in a horrific crash that left 15 dead and 14 others injured.

Condolences and offers of help poured in from the hockey community on Saturday for families of the Humboldt Broncos hockey team, which was involved in a horrific crash that left 15 dead and 14 others injured.

The accident occurred Friday when a truck collided with a bus carrying the junior hockey team to a playoff game against the Nipawin Hawks in northeastern Saskatchewan.

"I can't even imagine being the parent, or the wife, or the kids at home, going through something like this," Toronto Maple Leafs head coach Mike Babcock, who grew up in Saskatoon, told reporters on Saturday. "You can't make up for loss. It's gotta rip the heart out of your chest. We pray for those families and we're thinking about them."

"I don't know what else to say. Horrific, horrific accident. Tough day."

The Winnipeg Jets and Chicago Blackhawks wore "BRONCOS" on the backs of their jerseys instead of nameplates, and stood side-by-side around the centre-ice circle during a moment of silence before their game at Bell MTS Place on Saturday.

Both Winnipeg and Chicago, along with the NHL, pledged to each donate $25,000 to the Humboldt club. 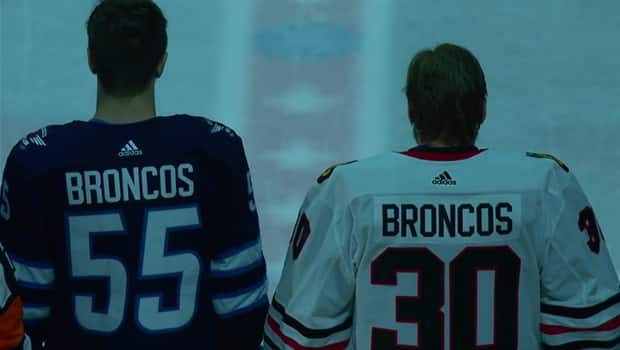 3 years ago
1:56
Winnipeg and Chicago came together to honour the victims of the Humboldt Broncos bus crash. 1:56

Teams across the league held similar ceremonies and wore decals with the Broncos' logo on their helmets.

The Jets, Edmonton Oilers and Calgary Flames said they would be sending the proceeds from each arena's 50/50 draw to the victims and their families. Todd McLellan and Glen Gulutzan — the head coaches of the Oilers and Flames, respectively — arrived in Humboldt on Sunday, according to Sportsnet's Gene Principe.

NHL icon Wayne Gretzky tweeted his condolences to the victims of the crash, saying it had weighed on him and his wife Janet.

Janet and I have struggled all day with the horrific accident in Saskatchewan. We are so sad for the <a href="https://twitter.com/HumboldtBroncos?ref_src=twsrc%5Etfw">@HumboldtBroncos</a> families and are praying for them.

Moments of silence were also observed at the men's curling world championship in Las Vegas, where Canada's Brad Gushue is competing in the tournament's playoffs, and prior to the baseball game in Texas between the Rangers and Toronto Blue Jays.

Canadian golfer Adam Hadwin, a Saskatchewan native who resides in Abbotsford, B.C., reflected on the emotions of the day after shooting an even-par 72 in the third round of the Masters.

Canadiens defenceman Brett Lernout spent two and a half seasons with the WHL's Swift Current Broncos, a team that was touched by tragedy when four players were killed in a bus crash in 1986.

The Winnipeg native said that accident still resonates in the community.

"It does. It does big time," Lernout said. "They just put a memorial ... it's just terrible to see that happen again."

'We grieve with you'

Winnipeg Jets head coach Paul Maurice also extended his "deepest sympathies" on behalf of himself and the Jets' organization. "Such a horrific situation, hits so very close to home for all of us," Maurice said.

"We grieve with you." 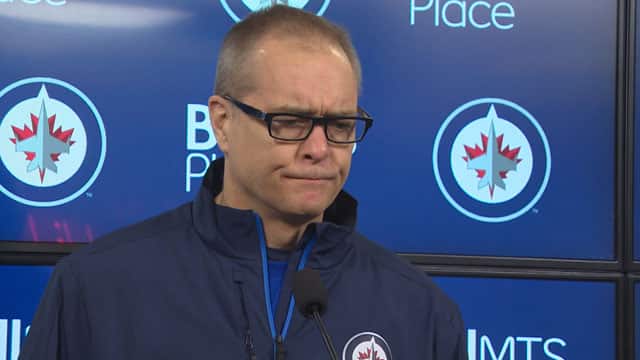 Rosemary Armstrong, the mother of former NHLer Colby Armstrong, tweeted that families could contact her if they needed a place to stay in Saskatoon.

Hayley Wickenheiser told CBC she is "heartbroken" by the tragedy. 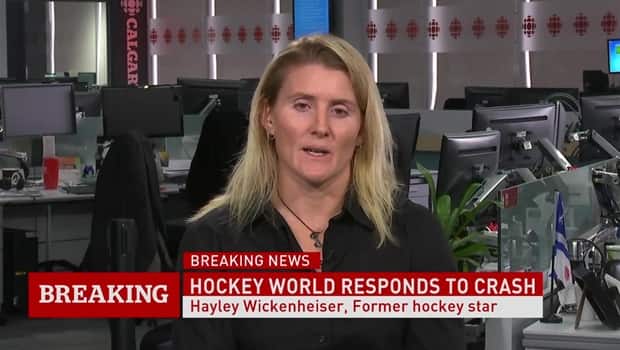 3 years ago
9:08
The Olympic hockey champion from Shaunavon, Saskatchewan played against some of the players who were involved in the fatal bus crash that killed 15 people in Saskatchewan. 9:08

Members of the hockey community across North America tweeted messages of support.

Former NHLer Sheldon Kennedy says he understands the "state of shock and confusion" that people are feeling after the crash involving the Humboldt Broncos that killed 14 people and injured 14 others.

​Kennedy says his heart goes out to the families of the victims and the first responders on scene. 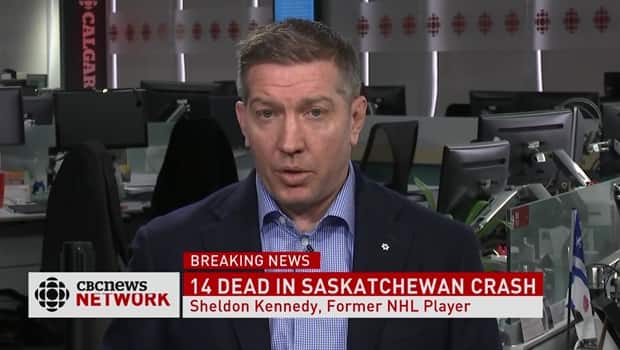 Kennedy was involved in a crash in 1986 when a bus carrying the Swift Current Broncos hit a patch of ice and crashed while the team was en route to Regina, killing four of the players.

He says in the wake of the Humboldt Broncos tragedy, it's important for people to be able to talk through their feelings because it's easy to underestimate the impact of this kind of trauma.

Canadian Olympians from Saskatchewan also offered their condolences. Retired heptathlete Brianne Theisen-Eaton, a native of Humboldt, tweeted in solidarity with her hometown.

"Sending strength and prayers to the families, friends and loved ones of the players, coaches and support staff of the Humboldt Broncos during this incredibly difficult time," tweeted the Olympic bronze medallist. "My thoughts are with my hometown of Humboldt, Sasketchewan."

Absolutely devastating news. Sending strength &amp; prayers to the families, friends &amp; loved ones of the players, coaches &amp; support staff of the Humboldt Broncos during this incredibly difficult time. My thoughts are with my hometown of Humboldt, Saskatchewan 💔

"My thoughts and prayers to all the players and families of the Humboldt Broncos," tweeted Vey.

With files from CBC Sports and CBC Toronto