'CWHL is in the process of paying everyone,' says board chair Laurel Walzak

"The CWHL is in the process of paying everyone and will be able to close in an orderly fashion," CWHL board chair Laurel Walzak said Tuesday in a letter that called the donations "large and critical."

The letter wrote on behalf of the CWHL board detailed the demise of the league and what a women's hockey league requires to survive.

The six-team CWHL ran for 12 seasons and gave the stars of women's hockey a league of their own.

But the league was in "severe financial distress" on April 1, Walzak said. 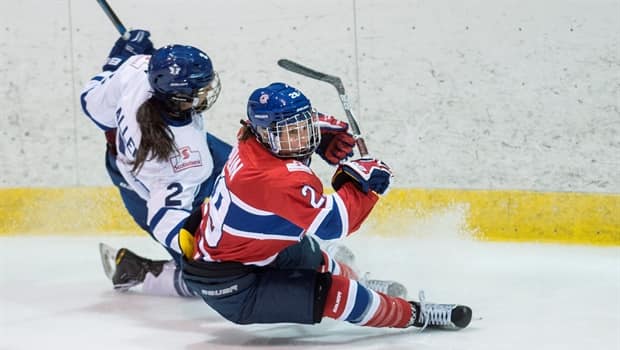 The merger of those teams the following season reduced that revenue stream, however. A source has also told The Canadian Press that China wanted to renegotiate the licensing fees.

"The League announced it was winding down one week after the Clarkson Cup because the League had payments due April first and was forecasting a significant deficit and believed based on response from the corporate marketplace that revenue would not increase materially in the upcoming 2019-2020 season," Walzak wrote.

Walzak wrote that $5 million to $6 million was required to keep the CWHL running, and closer to $10 million was needed for a fully functional pro league.

The U.S.-based NWHL that sprung up in 2015 "fragmented the potential sponsorship dollars," she added.

The five-team NWHL continues operate, but roughly 200 players including the female game's stars refuse to play in it.

Widespread calls for one women's league while two operated kept potential investors on the sidelines waiting to see what would happen.

NHL commissioner Gary Bettman has said the men's league is unwilling to step in as an owner while women's leagues were already operating.

The non-profit CWHL merging with a for-profit entity like the NWHL was not an option and if the CWHL went private, it would lose insurance coverage from Hockey Canada, Walzak added.

While the CWHL board of directors supports the players in the collective action for one league, Walzak wrote there needs to be considerable change around attitudes towards women's hockey.

"It is not smart for all of us to lament the end of the CWHL, while not changing the behaviours that led to its end," she said.

"Today's top female players obtain a modest stipend ranging from $1,000 to $10,000 per year compared to the lowest annual salary in the NHL of roughly $1 million.

"Successors to the CWHL must find a way for the best women to earn a full salary.

"We therefore urge all hockey associations and levels of government to allocate dollars directly to the women's game and to ensure that women are at the table when these decisions are made."

Walzak said the board received two offers of less than $20 to buy the league's assets with no assumption of liabilities, which the CWHL declined.

The league has raised $93,000 from an auction of memorabilia that went towards paying debt. Seven of the 10 CWHL trophies that were up for auction are headed to the Hockey Hall of Fame.