Canada juniors get past Swiss in pre-tournament tune-up

Maxime Comtois had two goals and two assists as Canada outplayed Switzerland but struggled to pull out a 5-3 victory on Wednesday in a pre-tournament tune-up game ahead of the world junior championship.

Maxime Comtois has 2 goals and 2 assists in victory

Comtois had two goals and two assists in Canada's 5-3 win over Switzerland in a pre-tournament game designed to help both squads prepare for the world junior championship that begins on Boxing Day in Vancouver and Victoria. Canada outplayed Switzerland but struggled to pull out the victory after a holding a 3-1 first period lead.

Comtois, the only returning player from last year's gold-medal team, expects the team to get better as the tournament progresses.

"It's a good thing this one is out of the way," he said. "We showed a lot of poise in the third period and we found a way."

Comtois scored an empty-net goal late in the third after the Swiss team fought back from the 3-1 deficit.

"We're going to figure this out tomorrow," said Comtois, who expected the team to regroup after Wednesday's performance.

Canada coach Tim Hunter was pleased with the team's first and third periods, but there was a let down in the second.

"We just took our foot off the gas a bit," he said. "We just didn't play as hard as we could in the second. I hope this is our worst game in this process." 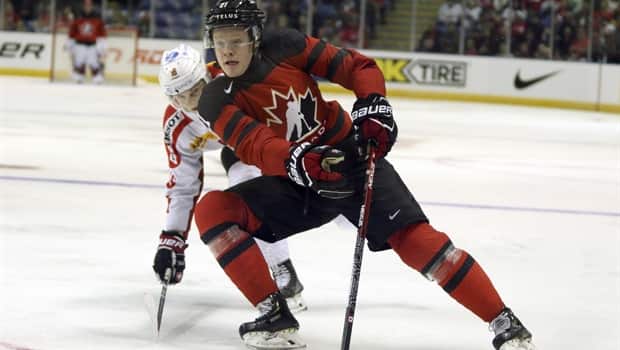 2 years agoVideo
1:34
The line of Maxime Comtois, Owen Tippett, and Cody Glass each scored in the first period en route to a 5-3 win over Switzerland. 1:34

Hunter said after the second period the players were told to show leadership and push harder.

He said he expects the video review of the second period let down to be a major focus as the team prepares for its next pre-tournament game Friday in Victoria against Slovakia.

Cody Glass, Owen Tippet and Jack Studnicka also scored for Canada, who open the tournament Dec. 26 in Vancouver against Denmark.

"There's definitely room for improvement in my game," said DiPietro. "As the game went on I felt more comfortable."

Ian Scott will start in goal for Canada on Friday against Slovakia.

Wohlwend reminded reporters that the Swiss have actually beaten Canada in hockey on two occasions, at the 2006 Olympics and at last year's world championship.

He said he was elated his team was within a goal of tying Canada late in the third period Wednesday.

Vilardi out with back injury

A nagging back injury will keep Canadian winger Gabriel Vilardi out of the world junior hockey championship.

Hockey Canada has confirmed the Los Angeles Kings prospect will not play in the tournament, Dec. 26-Jan. 5 in Vancouver and Victoria, B.C.

The team had hoped Vilardi would play in one or more of the three exhibition games this week, but the decision to keep the Kingston, Ont., native off the roster was finalized after he met with doctors.

With Vilardi's status uncertain, Canada was carrying one extra player in advance of the Dec. 25 deadline to set a 22-man roster. Though an NHL team could release a player and change things ahead of Wednesday night's roster freeze, that possibility is believed to be a long shot.