Defeating a stubborn and talented team from Sweden 3-1 in the world junior final on Friday was sweet redemption for Team Canada coach Dominique Ducharme and seven players who lost in the final of last year's tournament.

Instead of just stars, he put together a 4-line team that proved worthy of a championship

When Canadian forward Alex Formenton slid the puck in for a late-game empty-net goal to clinch the gold medal, head coach Dominique Ducharme raised his arms and looked to the heavens.

Defeating a stubborn and talented team from Sweden 3-1 in the world junior final in Buffalo, N.Y. on Friday was sweet redemption for him and the seven Canadian returning players: goalie Carter Hart, defencemen Kale Clague, Dante Fabbro and Jake Bean as well as forwards Dillon Dube, Taylor Raddysh and Michael McLeod.

​For 365 days, the 44-year-old coach from Joliette, Que. stated he has relived the crushing shootout loss to the United States in the gold-medal final a year ago. 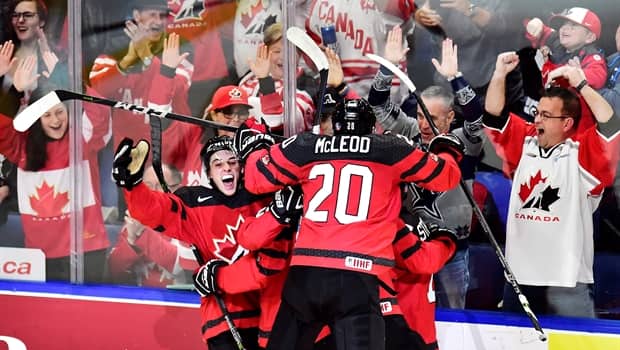 3 years ago
1:54
Tyler Steenbergen scored with less than two minutes left in the third, leading Canada to a 3-1 win over Sweden. 1:54

Ducharme returned with a new plan. He didn't want the highest draft picks available. He wanted a four-line hockey team, strong two-way play from each of his seven defencemen and he hoped Hart, from Sherwood Park, Alta., would stop enough pucks to win.

The plan worked. So much so that when Canada's remarkable power play (13-for-23 in the previous six games) fizzled in the final and even yielded a shorthanded goal to Sweden, it was the last guy on the depth chart who scored the winner with one minute and 40 seconds remaining.

The goal-scoring hero was Tyler Steenbergen of Sylvan Lake, Alta. The Swift Current Broncos forward left his junior team for the Canadian selection camp a month ago with an eye-popping 35 goals in 27 games.

Yet he couldn't win a regular shift on this team. He saw occasional spot duty, but mostly he sat on the bench and cheered on his teammates.

That is, until the third period of the gold-medal final. With the game tied 1-1 after the teams traded goals in the second period, Ducharme began putting out Steenbergen on the fourth line.

On the winning play, New Minas, N.S. native Drake Batherson, who scored three goals in the semifinal win against the Czech Republic on Thursday, won a puck battle down low. He fired a pass back to Canada's most efficient defender, Connor Timmins of Thorold, Ont. Timmins found Steenbergen, who will turn 20 on Sunday, near the side of the net and with his stick on the ice for a pinpoint redirect.

It was Steenbergen's first goal — the last of Canada's 13 forwards to score in the tournament. All of a sudden his name will be etched alongside other Canadians who have scored dramatic gold-medal winners — Dwayne Norris, John Slaney, Jonathan Toews and Matt Halischuk.

Hart was excellent in this game. He had to be. The Swedes outshot Canada 36-28 and easily could have won this game to keep their tournament record unblemished. But Sweden's first loss was a bitter one.

When New York Rangers prospect Lias Andersson was given his silver medal, he took it off and tossed it into the crowd. The fan who caught it posed for a photo and then made sure the distraught Swedish teenager got his medal back.

Meanwhile, sitting in a luxury suite taking all this in was Canadian men's Olympic team general manager Sean Burke and head coach Willie Desjardins. The two experienced hockey men will announce their 25-player roster on Thursday. They don't need any advice, but they may want to construct a similar four-line team with two-way depth on defence.

They also may want to take along a defenceman like Timmins or Montreal Canadiens Victor Mete, who will have to be returned to junior in order to be eligible for the Olympics. The senior national team also could use a finisher like Jordan Kyrou or the speed of Sam Steel.

This team was under a lot of pressure because it often was mentioned how Canada had been golden only once, in 2015, since 2009.

But now, instead of just one world junior title in nine years, Canada has claimed two championships in the past four.