Canada bounced back from a loss to the United States in the opening game at the world championship by trashing Korea 10-0 on Sunday in Herning, Denmark.

Tyson Jost and Joel Edmundson had an immediate impact on Team Canada's lineup at the men's world hockey championship.

Jost scored twice and Curtis McElhinney stopped 25 shots for the shutout as Canada routed South Korea 10-0 on Sunday in Group B action at the men's world hockey championship. Edmundson and seven other players added goals for Canada's first win of the tournament.

Both Jost and Edmundson were not in the lineup in Canada's 5-4 shootout loss to the United States on Friday. Edmundson was a scratch and Jost was still en route to Denmark after the Colorado Avalanche, his club team, was eliminated from the NHL playoffs.

"It's the first time we've had Edmundson in our lineup and Jost joined us late, so good to see them get some opportunity out there today," said coach Bill Peters after the game. 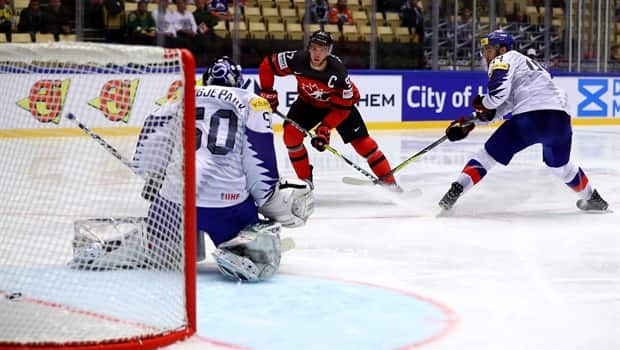 3 years agoVideo
1:11
Connor McDavid, Pierre-Luc Dubois and Joel Edmundson all had a goal and two assists, while Tyson Jost scored twice and had an assist in Canada's 10-0 win over Korea at the 2018 IIFH World Championship in Denmark. 1:11

"He was good, he was solid," said Peters. "It was good that we were able to get him in and he got some work, especially as the game wore on. I thought he got settled in and he handled pucks well. Something to build on for Mac, for sure."

Canada plays host Denmark (1-0-0-1) on Monday and will likely be a goaltending matchup between McElhinney and his Toronto Maple Leafs creasemate, Frederik Andersen, who is a superstar in his hometown of Herning.

Coached by former NHL defenceman Jim Paek, South Korea is participating in top-level world championship action for the first time in history after earning promotion with a second-place finish at the 2017 IIHF Division 1A tournament. Icing a nearly identical lineup to the group that participated in the Winter Olympics in Pyeongchang in February, the Koreans opened their tournament with an 8-1 loss to Finland.

South Korea managed just nine shots on goal against Finland on Saturday, but matched that in the first period against Canada. McElhinney looked sharp early, staring down several quality scoring chances as the Koreans tried to keep pace with a Canadian team that has earned one silver and two gold medals in its past three world championship appearances.

Back at even strength, Dubois made it 5-0 with his second of the tournament at the 2:32 mark of the second, prompting a time out by South Korea as Paek tried to settle down his overmatched squad, which was cheered on by a small but vocal group of fans at Jsyke Bank Boxen arena.

"I'm familiar with Hockey Canada with U17s, U18s and the world juniors," said Dubois. "Coming here with the men's national team, you learn a lot from these guys. You play against them during the season in the NHL, but to play with them, you see a completely different side from them and it's a really good time for me to learn."

Goaltender Matt Dalton, who has been playing for the Korean national team since 2015, endured a very challenging set of back-to-back games. After facing 45 shots from Finland on Saturday, the 31-year-old native of Kitchener, Ont., was pulled in favour of Sungje Park with 3:18 left to play in the second period after giving up eight goals on 40 Canada shots.

Park stopped eight of 10 shots he faced in 23:18 of game action. McDavid scored his first of the tournament to make it 9-0 at 4:40 of the third before Eberle tallied his first to bump the score into double digits at 8:55.

In later games on Sunday in Herning, Norway slipped past Germany in a 5-4 shootout win for their first win of the tournament before Finland rolled past Latvia 8-1.

In Group A action in Copenhagen, Russia routed Austria 7-0 before the defending world champions from Sweden edged the Czech Republic 3-2 and Switzerland blanked Slovakia 2-0.