Bob Nicholson formally announced Friday that he will be stepping down as Hockey Canada's president and chief executive officer, effective June 1. 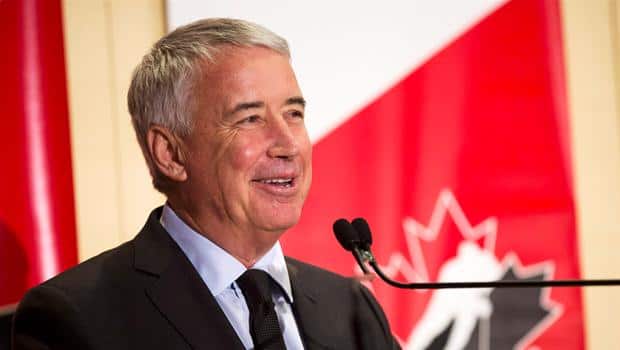 Bob Nicholson formally announced Friday that he will be stepping down as Hockey Canada's president and chief executive officer, effective June 1.

The organization confirmed the move in a press release Friday, before Nicholson spoke at a news conference held at the Toronto Maple Leafs' practice facility.

"My legacy is only going to be about how good Hockey Canada is when I finish, and I know it's going to be great," Nicholson said, fighting back tears. "Thanks to all the Canadians for allowing me to do this job."​

Nicholson, 60, a native of Penticton, B.C., has been at the helm of Hockey Canada since 1998. He has been involved in amateur hockey since 1979, when he was hired as technical director with the British Columbia Amateur Hockey Association.​

Nicholson said he began thinking about leaving after this year's Olympics, where the Canadian men's and women's teams both won gold medals.

“It was such a special ride in Sochi and it’s just time for me to move on. [The time] is right and the organization is in great shape.”

Nicholson said he will stay on as vice-president of the International Ice Hockey Federation, a position he has held since Sept. 25, 2012. Beyond that, he wasn't sure what he'll do next.

"I’m going to see if I can get my old job back on the gold range picking up golf balls for the summer," he joked.

Hockey Canada's board of directors will set a process and timeline for the naming of a new president and CEO over the coming months, according to a press release.

Nicholson's advice for his successor?

“Care about the game," he said. "Make sure it’s safe. Make sure you are in Flin Flon and all the small minor hockey communities across the country. Talk about sledge hockey. Talk about women’s hockey. The other stuff will come. We have good partnerships with the NHL and Canadian Hockey League.”