Tiger Woods, who got under par on Day 1 of the PGA Championship by swapping his usual putter for one that was a little longer, ended up in a battle simply to make the cut in the second round on Friday.

After Friday's barrage of misreads, short misses and rim-outs on greens he could not figure out, Tiger Woods might want to go back to his old putter. And find a new sand wedge while he's at it.

Woods, who got under par on Day 1 of the PGA Championship by swapping his usual putter for one that was a little longer, ended up in a battle simply to make the cut in the second round. He shot 2-over 72 to finish at even par at the midway point at Harding Park. He is eight shots behind leader Haotong Li.

Most of the problems had to do with his putting.

"I really struggled with getting the speed of the greens today," he said from San Francisco, Calif. "They looked faster than what they were putting. They were firm coming into the greens, but they weren't putting as fast as they looked. And then as the day wore on, they got a little more fuzzy and got even slower."

The rough putting day contributed to an 0-for-5 performance in the sand-save category, which brought him to 0-for-7 for the tournament.

A day that began with legitimate thoughts of Woods capturing his 16th major ended with him needing to play the last three holes at even par or better simply to make the cut.

He did, but there are eight shots and more than three dozen players separating himself and Li. An improbable gap to make up under the best of circumstances. Impossible if he keeps putting like that.

"You give it a run, but it's just not rolling out," Woods said.

He complained that the practice green has been rolling faster than the greens on the course all week.

Sure enough, the trouble started right away. On the first hole, he lined up an eight-footer, expecting it to move slightly to the right as it approached the hole. It stayed dead straight. It was the first of five misses from 12 feet and closer on the day. He needed 17 putts over the front nine, and made the turn in 2-over 37. At that point, he hadn't made a putt longer than three feet. 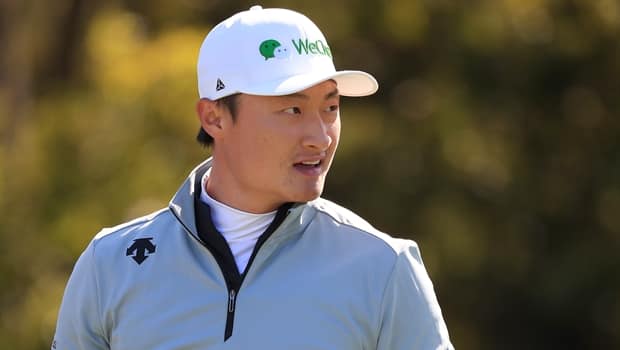 3 months ago
0:49
Haotong Li fired a 5-under 65 on Friday to take a two stroke lead into the weekend of the PGA Championship. 0:49

His sand wedge was no help. In two days, he hasn't left himself closer than seven feet out of any of the seven greenside bunkers he's found.

But when asked if he thought he could still win this tournament, Woods responded as expected: "Yeah," he said.

He was happy with his driver. He hit nine fairways, which was three more than the day before. But for the second straight day, he could not make both things work at the same time.

Woods said he was trying a different putter this week so he didn't have to bend over as much to make the stroke -- another small way of alleviating pressure on his surgically repaired back. It will be interesting to see if he sticks with the same flat stick for the weekend. Either way, maybe the best thing he's got going for him Saturday is an early tee time.