Jhonattan Vegas successfully defended his RBC Canadian Open title Sunday at Glen Abbey, beating Charley Hoffman with a birdie on the first hole of a playoff.

This year there were no video calls to be made when Jhonattan Vegas won the RBC Canadian Open. He'd brought his wife and daughter with him so they could see him win the PGA Tour event — again — in person.

Vegas made birdie on the 524-yard par-5 No. 18 to win a playoff with Charley Hoffman on Sunday and capture back-to-back Canadian Opens. As soon as he'd shook hands with Hoffman, hugged his caddy and waved to the crowd, Vegas beelined for his wife Hildegard and hugged and kissed her between the bunkers that sit behind the green.

"It's hard to put it in words," said Vegas. "But it's just really fun, watching them really enjoy it in person and seeing how nervous they are when I'm on the course playing. Every time you get a chance to share these moments with your family, it's just really important." 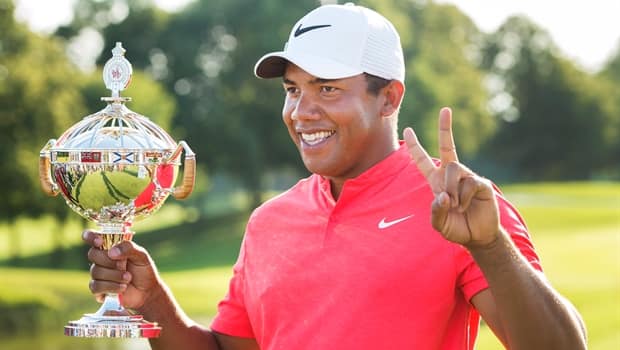 4 years ago
1:56
After needing a playoff, Jhonattan Vegas was able to fend off Charley Hoffman to win the 2017 Canadian Open 1:56

Vegas was in Canada alone when he won last year — even his caddy couldn't make it because of visa issues — so he spent his entire news conference on his phone FaceTiming his family.

Missed ending it in regulation

The Venezuelan shot a 7-under 65 in the fourth round to finish the tournament at 21 under. Hoffman, who entered Sunday atop the leaderboard with a one-stroke lead, had a 68 to force the playoff.

Vegas could have sealed his win in regulation and prevent a playoff at Glen Abbey Golf Club, but came up four inches short on his birdie putt. That opened the door for Hoffman, who was in the day's final group, three pairings back.

While he waited for Hoffman to make his way through Nos. 17 and 18, Vegas retreated to the clubhouse to watch on TV with a PGA Tour official. It was the same position he was in last year watching the final pairings complete their rounds.

"I had to sit down pretty much in the same chair, same TV and just wait to see what was going to happen," said Vegas. "I was feeling a little bit angry with myself that I didn't birdie 18 in regulation, because I knew that would have given me a better chance to win."

Both players put their drives into bunkers on the playoff hole. Hoffman landed to the left of the fairway and Vegas went to the right, into a sandtrap nicknamed "Tiger's Bunker" after Tiger Woods put the ball in it during the final round of his Canadian Open championship in 2000.

"Just hit really probably the worst drive of the week for me down there and Jhonny caught a break by having a shot at the green," said Hoffman. "Hats off to him the way he played. I played great. Just didn't get the putts to the hole, which is probably going to be what I lose a little sleep over."

Jim Furyk was the last golfer to win back-to-back Canadian Opens. He did it at Hamilton Golf and Country Club in 2006 and then at Angus Glen Golf Club in Markham, Ont., in 2007.

Vegas's win came as deadly clashes between protesters and police marred voting that allowed President Nicolas Maduro to replace Venezuela's current legislative body — the National Assembly — with a new institution called the Constituent Assembly that will have the power to rewrite the constitution.

"It's always on my mind," said Vegas, who was born in Maturin, Venezuela. "It hurts a lot, seeing the country the way it is. Seeing a government that treats people that way when they don't deserve it just to remain in power, and all the suffering that even my family and friends that are having right now, it's just not fair."

Glen Abbey, which has hosted the event 27 times, is slated to host the 2018 Canadian Open. After that, though, the course's status is in doubt as it may be redeveloped as a subdivision.

"I'm going to be one of the biggest voices to keep this course open, especially if I keep winning here," said Vegas with a laugh. "I'll definitely make a statement on trying to keep Glen Abbey going."