Max Homa has been tearing up the Stadium Course at The American Express for two days. If he can do it one more time Sunday, the Southern California native could be raising his second career PGA Tour trophy.

Max Homa has been tearing up the Stadium Course at The American Express for two days. If he can do it one more time Sunday, the Southern California native could be raising his second career PGA Tour trophy.

Homa made nine birdies and shrugged off a double bogey on the way to a 7-under 65 in the third round Saturday, joining Tony Finau and Si Woo Kim atop the leaderboard at 15-under 201.

Richy Werenski also shot a 65 and moved within a shot of the lead on the Stadium Course at PGA West near Palm Springs.

Roger Sloan of Merritt, B.C., is in a seven-way tie for 13th place after a 3-under 69 Saturday, four strokes behind Homa, Finau and Kim.

Nick Taylor of Abbotsford, B.C. shot a 2-over 74, to fall into a tie for 31st place. Taylor finished his second round in second place, one stroke behind then-leader Sungjae Im.

Fellow Abbotsford native Adam Hadwin also shot a 2-over 74 and is now in a tie for 55th place. Brantford, Ont. native David Hearn is in a tie for 63rd at 2-under par. 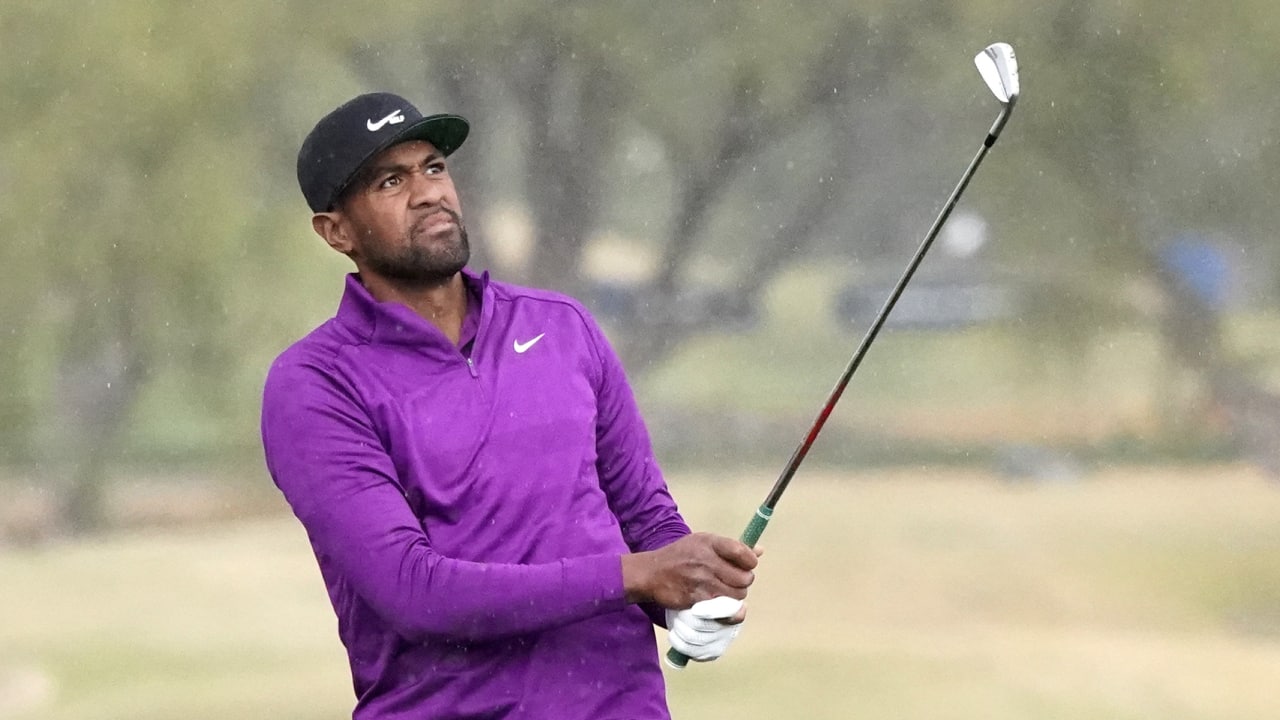 Tony Finau holds share of lead at The American Express

Scotland's Russell Knox shot the day's low round with a 64 — one stroke off the course record — to join Brian Harman and Emiliano Grillo at 13 under.

Finau and Kim both shot 67. Kim was bogey-free, while the streakier Finau bounced back from a double bogey on the 13th with three consecutive birdies.

The field played through sparse desert rain in the afternoon. Precipitation finally fell in earnest when the final group reached the 18th hole, with Finau and Kim forced to pull out their umbrellas.

Second-round leader Sungjae Im struggled to a 73, leaving him five shots off the lead after four bogeys — including a triple bogey on the ninth after putting two straight shots in the water. First-round leader Brandon Hagy shot a 72 and was even with Im at 10 under.

Homa is in prime position for his second career win in his first tournament of the new year. He began the day just three shots off Im's pace at 8 under, and he swiftly closed the gap with four birdies in his first five holes.

Homa has 17 birdies in the last two rounds on the Stadium Course.

"There's obviously a handful of very daunting holes, but I've been fortunate enough to play here a ton, so I have a pretty good feel for the place," Homa said. "I've been able to put myself in a position to have good looks for birdie, and I've been putting great. It's just something about these greens. It feels like home."

The Burbank-born son of a well-known acting coach put his tee shot in the water and two-putted for that double bogey on the seventh, but Homa made up for it with birdies on five of his next eight holes, including three in a row down the back stretch.

Finau put his tee shot in the water on the 13th and then missed a 10-inch putt for double bogey, but the Utah native rebounded with three of his eight birdies on a series of impressive approach shots.

Werenski charged into fourth with a round that included six birdies and was highlighted by an eagle on the fifth after an exceptional 224-yard approach shot left him a 4-foot putt.

The 29-year-old Massachusetts native is seeking his second PGA Tour win. After going bogey-free through his first 48 holes at The American Express, he finally missed a 10-foot par putt on the 13th before rallying with two more birdies down the stretch

Round 2: Triple bogey<br>Round 3: Double bogey<a href="https://twitter.com/maxhoma23?ref_src=twsrc%5Etfw">@MaxHoma23</a> would be first player since Rickie Fowler (WMPO, 2019) with double and a triple or worse to go on to win. <a href="https://t.co/WRA6ccU5qd">pic.twitter.com/WRA6ccU5qd</a>

"I've been giving myself plenty of looks and just haven't been converting them, and today I finally made some [putts]," Werenski said. "So I think we're kind of turning the corner.. ... I've always liked this place. I've never finished really, really high here, but I've always known that I could play really good. It just fits my eye."

Australia's Cameron Davis had the shot of the day on the 15th, holing out for eagle from 157 yards away from a section of rough below the fairway. Davis finished the third round at 12-under 204 along with Rory Sabbatini, Chase Seiffert, Francesco Molinari and Doug Ghim.