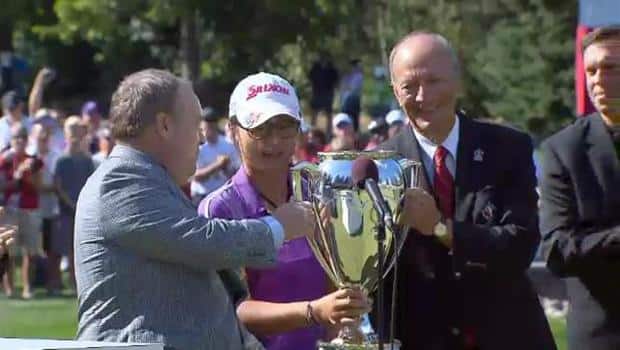 8 years ago
1:00
Teenage golf phenom Lydia Ko made history at the CN Canadian Women's Open, winning the tournament for the second straight year. 1:00

The 16-year-old from New Zealand shot a final round 64 to finish at 15 under for a five-stroke victory over Karine Icher.

Ko became the youngest winner of an LPGA event last year when she won the Canadian Open at the Vancouver Golf Club at age 15. With Sunday's victory, she becomes the first amateur in history to win two LPGA events.

Ko started the day one shot back, but shredded the course at Royal Mayfair Golf Club with five birdies on the front nine and never looked back.

She had seven birdies in total and curled in a birdie putt from 16 feet out on the final hole to cap the day.

"I hit a really good drive on one and I kept it to the fairway, and I think that kind of got my momentum going," Ko said. "I was in a little bit more of a pressure position (as defending champion), so I was really happy with my 64."

Unfortunately winning is becoming an expensive proposition for Ko, who was born in South Korea but grew up in New Zealand.

As an amateur, she cannot accept the $300,000 first prize, which instead goes to Icher. Ko has played in 14 LPGA events over the last two years, leaving almost $1 million in prize money on the table.

Ko said she's still considering asking the LPGA for an exemption to let her turn pro before she's 18.

"I've got some people above me like my mom and dad. They're the boss, and they're going to help me definitely make the right decision to turn pro at what time," said Ko, who shot 265 over the tournament's four rounds. "As I'm only 16 it's quite hard to make huge decisions. And when I turn pro it's like a job, where money is all about it and every shot counts."

Ko has always said her driving is the strength of her game, and proved it again this week by hitting 45 of 56 fairways and 56 of 72 greens in regulation.

Icher, ranked 24th, had her best finish of the season. The 24-year-old from France carded four birdies to go with one bogey Sunday to finish 10 under for the tournament.

Canada has been good to Icher, who finished 5th in July at the Manulife Classic in Waterloo, Ont.

Icher said her game improved throughout the week.

"I would like to play tomorrow," she said. "It was a good day today. I'm very happy with my game. More putts got in."

She said Ko's feat was impressive.

"She's amazing. Sixteen years-old and to win twice. She has no fear, I guess," said Icher.

"It's incredible. As an amateur and so young, it's great for women's golf, but not so great for us (on tour)," she laughed.

Sweden's Caroline Hedwall began the day with a one-shot lead, but could not match her lights out 6-under performance from the third round.

"I was trying to keep up with (Ko), but at the same time I couldn't hit it as close and I couldn't make as many putts," said Hedwall, who finished at 9 under overall after shooting a 71. "She was just really impressive today."

Brittany Lincicome of the U.S. wound up tied for third with Hedwall after shooting a 69.

It was a disappointing tournament for the top two players on tour.

No. 1 ranked Inbee Park was carving up the putting greens and held a share of the lead heading into Saturday's third round only to see her game fall apart.

She finished 11 strokes back in a tie for 13th.

"My putting just didn't want to go in the hole like the (first) two days," Park said. "Nothing wants to drop. You get those kind of days."

Park said she switched putters for this tournament because the insert on her first one was worn out.

No. 2 Stacy Lewis racked up five bogeys on her first seven holes in the first-round Thursday before withdrawing due to illness.

Samantha Richdale of Kelowna, B.C., was the top Canadian. Richdale shot three-over 73 to finish the tournament tied for 62nd, 23 strokes off the pace.

"I had an OK day today," Richdale said. "I struggled with my ball striking. I think I hit only eight greens, which makes things pretty tough.

"I would have liked to have made a few more ups and downs, but that's the way it goes."

Jessica Shepley of Oakville, Ont., ended up 72nd. She shot six-over 76 to finish 30 strokes behind Ko.

The other 18 Canadians in the field, including veteran Lorie Kane of Charlottetown, did not make the cut.