Four strokes behind Nordqvist entering the round, Ernst had the best score of the day, making 10 birdies and two bogeys at Pinnacle Country Club. She joined 2014 champion Stacy Lewis as the event's only American winners.

"I knew I needed a really low score," Ernst said. "I kind of thought at the beginning of the week that 20 under would win and I think that's what I got to, so guess I was right on that one. But you knew that out here you needed to attack and you couldn't be afraid and couldn't just kind of middle-the-green it all day."

Nordqvist closed with a 69 after opening with rounds of 64 and 62 to take a three-shot lead into the final day. 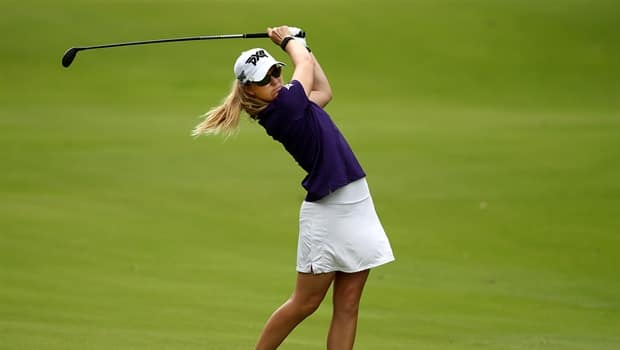 5 months agoVideo
1:32
Austin Ernst carded an 8-under 63 on Sunday to win the NW Arkansas Championship and pick up her first LPGA Tour victory since 2014. 1:32

Ernst opened with consecutive 65s to put herself in position to win for the first time in 144 starts since the 2014 Portland Classic. The 28-year-old former LSU player also won the 2011 NCAA individual title.

"It was long," Ernst said. "A lot longer than I thought it would be. Oh, man, it feels good. I have worked really hard. I think this break was fantastic for me. Helped get my confidence back. I had a rough year last year. I played so well in 2018, and, man, just feels so good right now."

"I think what's kind of held me back in the past is I won't hit as many fairways and don't make quite as many putts, and today I hit the ball really well, really being under the gun all day," Ernst said. "Just I'm proud of all the hard work, and it's nice to see to pay off."

Nordqvist, the 33-year-old Swede with two major titles and six other LPGA Tour wins, also bogeyed the par-4 12th — her first dropped stroke of the week. She played the four par-5 holes in 1 over, while Ernst birdied them all.

"I played great this week," Nordqvist said. "Just felt like it wasn't really meant to be. On the back nine, hit a lot of good putts. They just didn't go in. Two bad drives that kind of killed me a little bit. ... So just a lot of positives this week. Felt like I did a lot of good things today, too."

Ernst is the third U.S. winner this season, following Danielle Kang (Drive On Championship, Marathon Classic) and Lewis (Ladies Scottish Open). Lewis, the former University of Arkansas star, closed with a 70 to tie for 28th at 9 under. ... Alexa Pano, the 16-year-old Florida amateur playing on a sponsor exemption, was another stroke back after a 66.