So Yeon Ryu broke away on the closing holes Saturday at Kemper Lakes to take a three-stroke lead in the KPMG Women's PGA Championship as Brooke Henderson struggled.

Canadian bogeys twice, trails by 3 strokes heading into final round

So Yeon Ryu sees another major championship in reach and a spot in history in sight. She knows what she has to do, and she took a big step Saturday.

Ryu broke away on the closing holes at Kemper Lakes to take a three-stroke lead in the KPMG Women's PGA Championship. 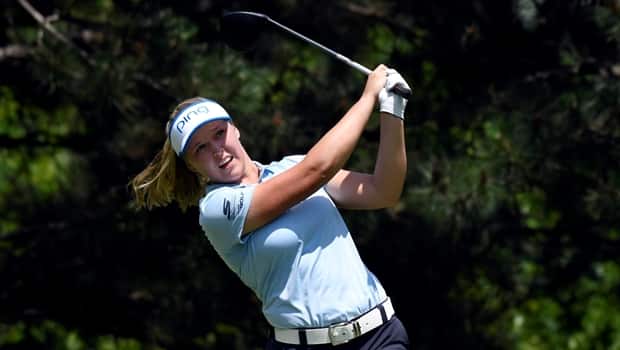 2 years agoVideo
0:51
After making three birdies on the front nine, Henderson lost her lead on the back nine, and sits three shots back of leader So Yeon Ryu. 0:51

The 28-year-old South Korean star birdied the 14th and 15th holes to jump ahead of Canadian Brooke Henderson and finished with a birdie on 18. She shot a 5-under 67 on another scorching afternoon to get to 11-under 205 and move closer to her third major victory.

Ryu won the 2011 U.S. Women's Open and 2017 ANA Inspiration for her major victories. Adding the Women's PGA would be quite the way to cap her birthday week after she turned 28 on Friday.

"Winning this tournament is going to be huge because I never really dreamed about becoming a Grand Slammer," she said. "But after I won the ANA Inspiration, I started to dream about becoming a Grand Slammer. For that, I need to definitely win this tournament, and right now, I'm in pretty good position to achieve another dream so I really want to make it."

She also won the Meijer LPGA Classic two weeks ago in Michigan for her sixth LPGA Tour victory. And she's in a good spot at Kemper Lakes despite the brutal weather.

After heavy rain soaked the course earlier in the week, the past two days have been marked by brutal heat, with temperatures in the mid-90s on Saturday. And with storms in the forecast on Sunday, organizers decided to adjust the tee times and have groups of three start on the first and 10th holes.

Henderson — the KPMG winner at Sahalee in 2016 and runner-up to Danielle Kang at Olympia Fields last year — led most of the afternoon and was up by two strokes at 10 under.

OH, CANADA!<br><br>Brooke Henderson will also be playing for a slice of Canadian golf history on Sunday. If she were to win <a href="https://twitter.com/KPMGWomensPGA?ref_src=twsrc%5Etfw">@KPMGWomensPGA</a> for the 2nd time in three years, she’d become the first Canadian golfer – man or woman – to win multiple major championships. <a href="https://t.co/gQuY6c1Uv9">pic.twitter.com/gQuY6c1Uv9</a>

The back-to-back birdies by Ryu and two late bogeys by Henderson turned things in a hurry. Ryu also used a neat approach on 18 to set up a short birdie putt on the par-4 hole. But she actually started to sense things turning when she buried a 15-foot birdie putt on 11 and an 8-footer for par on the par-3 13th. 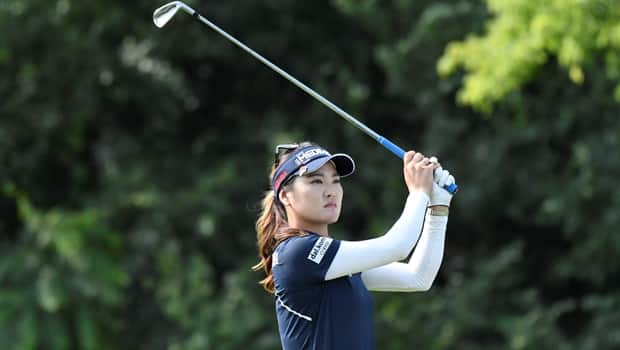 Ryu had the right touch on her birdie putts on 14 and 15.

"After the front nine, I couldn't actually expect to be leading after the third round," she said. But I think that 11 was really, really important momentum for me. That was a really big birdie."

The late bogeys aside, Henderson feels like she has all parts of her game working for her. And she believes she is in a good spot heading into the final round.

"I feel like I can really depend on my tee shots and my long game," she said. "I've been hitting it close and giving myself good looks for birdie. Today, I kind of struggled a little bit with my putter, which is disappointing, but I think just kind of get better in my head and just go out tomorrow and make a lot of good shots and see if I can make some birdies. And hopefully, they roll in."

She added that she feels even more confident given her past successes at the tournament.

"Knowing that I've played so well here before and I've been able to hoist that trophy that will probably be looking at us on the first tee tomorrow, it's a great feeling," said Henderson.

"So hopefully I can just put a solid round together, and that's all I can really ask for."

She also won the Meijer LPGA Classic two weeks ago in Michigan for her sixth LPGA Tour victory. And she's in a good spot at Kemper Lakes despite the brutal weather.

Yin was rolling along, making a push toward the top of the leaderboard, after beginning the day four strokes off the lead. The 19-year-old from Arcadia, California, birdied the 10th, 11th and 12th holes to get to 7 under, but a double-bogey on No. 16 slowed the surge.

Her 3-wood off the tee hit a bunker on the left side of the fairway and an 8-iron went to the water on the right. She also missed a bogey putt. But a birdie on 18 gave her a strong finish despite the heat.