When Louis-Philippe Simoneau was diagnosed with aggressive B-cell non-Hodgkin lymphoma in February, getting back on the gridiron was an immediate priority.

When Louis-Philippe Simoneau was diagnosed with aggressive B-cell non-Hodgkin lymphoma in February, getting back on the gridiron was an immediate priority.

He was going to kick for the Montreal Carabins for this season. Those were the first words head coach Danny Macioca heard at the initial hospital visit with his dual kicker and punter, anyway.

"Here he was going to be fighting for his life, and the first thing he says is that he wants to be playing football," Macioca said. "I told him we'd be doing everything we could to help him."

Now Simoneau, 24, is preparing for the final USports game of his career, a Vanier Cup matchup against Calgary in Quebec City on Saturday. Watch it live on CBCSports.ca on Saturday at 1 p.m. ET.

"It's really hard to get that news," Simoneau said. "But after three or four days, I just wanted to beat cancer."

Simoneau underwent his first of six chemotherapy treatments in mid-February, with the final one occurring July 5. After a scan later that month to determine whether additional treatment would be necessary, Simoneau's doctor left for vacation. He said saying a follow-up was due in the coming days. 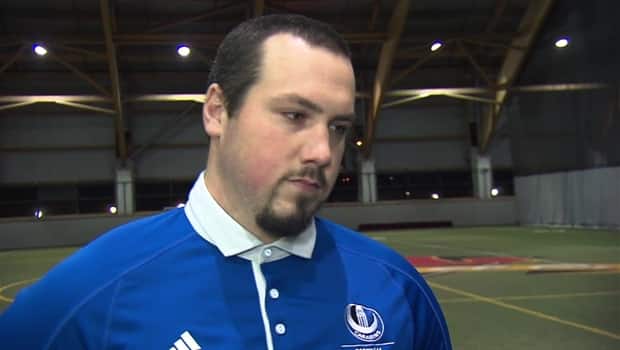 Inside Louis-Philippe Simoneau's difficult journey back to the Vanier Cup

1 year agoVideo
3:24
Montreal Carabins' Louis-Philippe Simoneau spoke with CBC Sports' Andi Petrillo about being diagnosed with non-Hodgkin lymphoma in February, and his journey back onto the football field. 3:24

After a quiet few days, an antsy Simoneau couldn't wait much longer. Exactly one week after the scan, he visited the hospital himself. The diagnosis: remission. His first calls: parents, special teams coach Byron Archambault and girlfriend Catherine Voutsinos.

"It was very emotional. I cried, but this time it was tears of joy," Simoneau said.

Voutsinos had spent weeks sleeping on a cot in Simoneau's hospital room. It only made sense, then, that now, officially cancer-free, was the right time to propose. Voutsinos said yes.

Still, one administrative obstacle had stood in the way throughout Simoneau's treatment, and it became the final hurdle. Because he couldn't meet academic requirements while treating his cancer, Simoneau was forced to apply to U Sports for compassionate leave in order to return to the football field.

WATCH | Stars of the Vanier Cup: 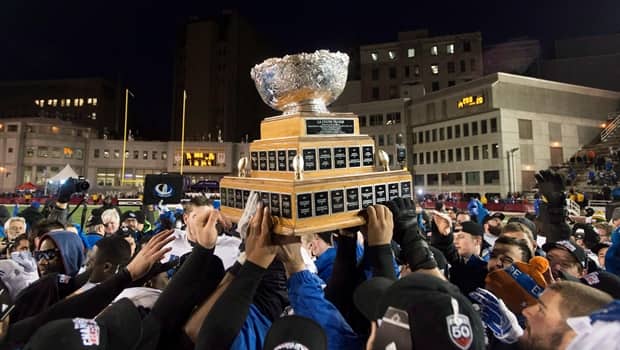 1 year agoVideo
2:37
With the Vanier Cup taking place this week, take a look back at some of the game's biggest past stars. 2:37

It was another week after Simoneau's cancer-free diagnosis that Macioca sent him a text message: "Hi! You've won your compassionate appeal. All in, baby!"

"The pressure goes off and I was ready to go for this season," Simoneau said.

The recovery timeline also worked perfectly with the Carabins' season, as the kicker joined his team at the beginning of training camp.

"With my experience and technique, I knew I could play even if I wasn't in top physical condition," Simoneau said.

He was right, as he beat out three other contestants for the starting role with Montreal.

Simoneau's season debut doubled as the Carabins' season opener, a 10-3 win against the Concordia Stingers in which he nailed a rouge just 27 days after his final visit to the hospital.

Two weeks later, Simoneau made a team-record six field goals in a rout of McGill. In October, his 60th career made field goal would set the all-time school record.

Simoneau also owns the longest field goal in Quebec Student Sport Federation (RSEQ) conference history at 52 yards. He was named RSEQ's outstanding special teams player last season, and an all-star this year. He kicked the game-winning field goal in the 2014 Vanier Cup during his rookie season, and was with the team in when it lost to UBC in the 2015 final.

As a kicker, there isn't much control. You're called on in pressure situations, and expected to succeed with little patience for failure. Simoneau is more than familiar with the feeling.

"I will go on the field and I will just kick the ball each time and I don't make any pressure," Simoneau said.

Now entering his third national championship game, Simoneau is all in, baby.

"I don't know man, just be me and kick the ball. I know I can do it so just show up there ready to go. I'm very happy. I feel pretty happy to be here and I'll just enjoy each moment."

After the game, Simoneau plans on going on vacation with Voutsinos, though they're not quite sure where yet.

"And after that I don't know, I'll just finish my school and maybe find a good job and start real life."