Running back Reda Malki scored two touchdowns in the Montreal Carabins' rout of the Acadia Axemen on Saturday in the Uteck Bowl.

The Montreal Carabins drew up a plan to run the ball hard against the Acadia Axemen in Saturday's Uteck Bowl.

Running back Reda Malki helped them achieve their goal — and win the game.

Malki scored two touchdowns in the second half to earn himself offensive MVP honours as Montreal routed the Acadia Axemen 38-0 to advance to the Vanier Cup.

"We had a game plan," Malki said, sweat still dripping down his face and smudging his eye black. "We wanted to run the ball as hard as we can and make some touchdowns, and that's what we did."

Montreal also had a strong game on the back end, with defensive back Jean-Sebastien Belisle of Trois-Rivieres, Que., being named defensive MVP of the game.

The Carabins will play the Calgary Dinos next Sunday in the Canadian university football championship. Montreal played back-to-back for the Vanier Cup in 2014 and 2015, winning the first and losing the second.

"I think we are confident we will win the Vanier Cup," Malki said. 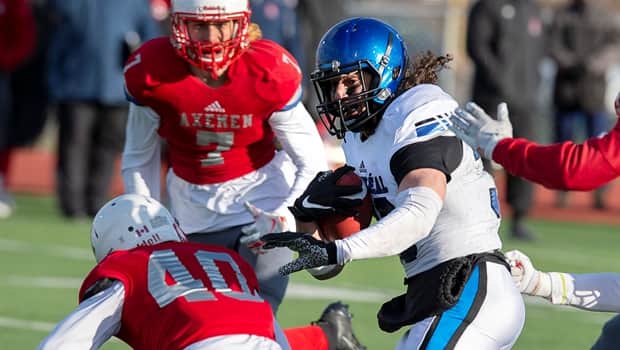 1 year agoVideo
1:41
The Carabins offence came alive in the second half as they rolled over the Axeman on their way to the 2019 Vanier Cup. 1:41

Malki first got into the end zone on a 16-yard run late in the third quarter. The Laval, Que., native did it again on a four-yard run early in the fourth quarter, with Montreal kicker Louis-Philippe Simoneau making good on both conversions.

The AUS-championship winning Axemen had their nine-game undefeated season come to an end with the lopsided semifinal loss, much to the dismay of local fans who bundled themselves up in blankets and sleeping bags to brave the frigid weather in hopes of seeing their team return to the Vanier Cup for the first time since 1981.

Montreal took control of the game with two more third-quarter touchdowns, one from Carabins quarterback Dimitri Morand and the other from receiver Kevin Kaya ultimately sealed their semifinal victory. Simoneau made good on both those kicks.

"From the initial kick-off that was supposed to be a deep kick, to not recovering another kick that they had, we didn't take care of it."

Acadia fourth-year defensive back Brett Switzer said his team came out strong in the first but during "the third quarter, they just got on us hard."

"In the locker room, it's sad, but we're a family," said Switzer. "No one is getting down on each other. From here, we'll just rebuild. Fill spots that are now gone and go from there, because we'll have a lot of returning guys, and a strong bond already made." 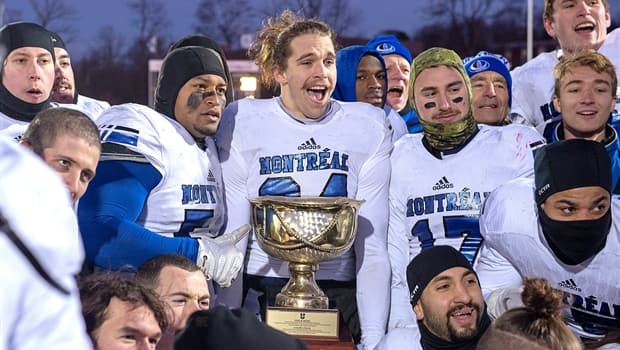 Carabins head coach Danny Maciocia said his team set its bar as high as possible right at the start of the season.

"This is something our student-athletes work really hard for, it's been our objective since the start of the year to play in this Vanier Cup," he said.

Maciocia was pleased with how his team turned around a slow start to Saturday's game.

"I thought at the beginning we struggled with it, they did a good job," Maciocia said. "The second half was the difference. The third quarter when we had the wind to our back, we were able to capitalize multiple times in the scoring zone."

Maciocia said the Carabins are going to spend a couple of days basking in their Uteck Cup glory before getting back to business.

"It's a great accomplishment. We're really proud of it," Maciocia said. "And now we're looking forward to next week."

The Vanier Cup, set for Nov. 23 at TELUS-Université Laval Stadium in Quebec City, will be live streamed at CBCSports.ca starting at 1 p.m. ET.