Fourth-year quarterback Adam Sinagra led the Calgary Dinos to a 27-13 win over the Montreal Carabins for the Vanier Cup on Saturday.

Fourth-year quarterback Adam Sinagra led the Calgary Dinos to a 27-13 win over the Montreal Carabins for the Vanier Cup on Saturday.

Sinagra, a native of Chateauguay, Que., completed 22-of-28 passes for 292 yards and two touchdowns in his final U Sports game to help Calgary win its first Canadian university football championship in 24 years.

It was the fifth Vanier Cup win in Dinos history. They had last won in 1995, when they beat the Western Mustangs in Toronto.

"To win this in my home province, to end my career as a champion, and I've never won anything before, at any level, wow," said Sinagra, the game's MVP. 1 year agoVideo
1:46
Calgary QB Adam Sinagra lead the Dinos to their first Vanier Cup in 24 years as they beat the Montreal Carabins 27-13. 1:46

The Dinos added a late TD in the final minute of the game on a Robinson Rodrigues one-yard run.

"What a sweet win," said Calgary's head coach Wayne Harris. "Those veteran players showed a lot of leadership today and all season long. And Adam [Sinagra] played one heck of a game." 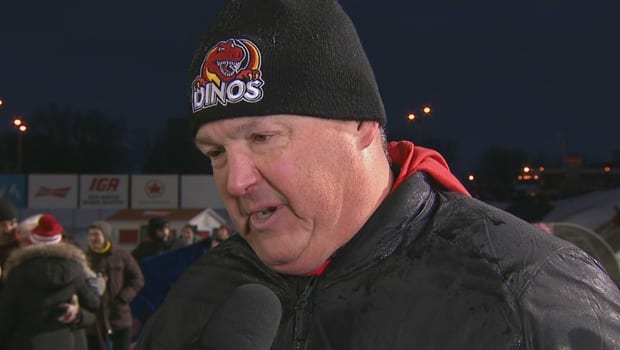 Wayne Harris Jr.: 'So excited for everybody in our organization'

Calgary opened the scoring with a pair of field goals from Nick DiFonte — from 22 and 38 yards — to take a 6-0 lead in the second quarter.

The Carabins briefly pulled ahead, scoring the game's first touchdown on a one-yard run from Reda Maki late in the second quarter. The score was helped by a faked field goal during the drive.

The Dinos responded quickly with a touchdown of their own when Sinagra connected with Jalen Philpot in the end zone on a 13-yard pass, giving Calgary a 13-7 lead at half time.

Karl extended Calgary's lead to 20-7 with his TD in the fourth, before a pair of field goals by Montreal's Louis-Philippe Simoneau from 27 and 16 yards out cut the Carabins' deficit to 20-13. 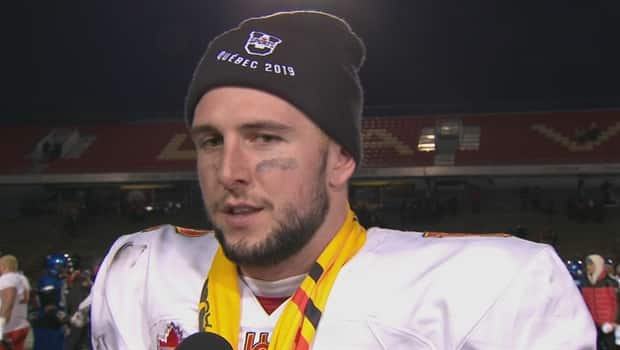 Adam Sinagra: 'I'm at a loss for words'

The Dinos suffered a serious blow on defence when linebacker Charlie Moore was injured on the second offensive play of the game. Moore went down after he tackled running back Ryth-Jean Giraud. Moore got back up after a few minutes but did not return to the game.

Later, it was the Carabins defence that was hit hard when linebacker Jean-Philippe Levesque and defensive back Marc-Antoine Dequoy exited the game with injuries.

The game was played in front of 8,376 fans at Telus Stadium, on the campus of Laval University.