Dinos down McMaster in Mitchell Bowl

Quarterback Adam Sinagra went 19-for-29 for 261 yards and a touchdown as the Dinos advanced to the championship game with a 30-17 victory over the McMaster Marauders on Saturday in the U Sports Mitchell Bowl.

The University of Calgary is headed back to the Vanier Cup.

Quarterback Adam Sinagra went 19-for-29 for 261 yards and a touchdown as the Dinos advanced to the championship game with a 30-17 victory over the McMaster Marauders on Saturday in the U Sports Mitchell Bowl.

"They've worked hard all season to get to this spot and to get the opportunity now to go for the championship prize and that's what every team wants," said Calgary coach Wayne Harris.

On a perfect fall day with dry conditions at McMahon Stadium, the home side scored first on a seven-yard touchdown pass from Sinagra to Jalen Philpot at 5:13 of the first quarter. Calgary didn't trail from there, holding quarter leads of 7-0, 17-10 and 20-10.

WATCH | Dinos too much for McMaster in Mitchell Bowl: 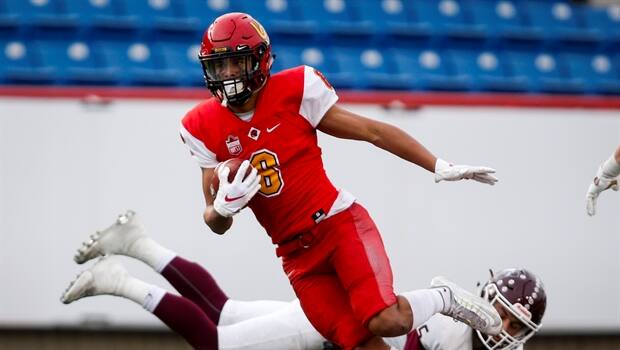 Game Wrap:  Dinos balanced attack too much for McMaster in Mitchell Bowl

11 months ago
1:51
Calgary's solid performances from the Philpot twins, Jalen and Tyson, helped power the Dinos past McMaster toward the Vanier Cup.  1:51

"We knew it was going to be big just to come out and punch them first," said Philpot, who also had a 34-yard grab on that opening drive. "Our team is one of those teams that plays off momentum so as an offence, we're like 'let's go get the momentum first and keep it up."'

McMaster quarterback Andreas Dueck finished 23-for-46 for 297 yards, one touchdown and one interception. Marauders' receiver Tommy Nield had eight catches for 151 yards and a touchdown.

"I'm really proud of them and they're going to hang with anybody, but we were outplayed today," said McMaster coach Stefan Ptaszek.

"I hope my vets are very proud of the standard they set," Ptaszek said. "They certainly left McMaster better than they found it. Hope my young guys are disappointed and frustrated and learn from the experience and they're a little better for it."

Leading 20-10, Calgary delivered the knockout punch on a big third-down play from the two at 7:27 of the fourth quarter. Back-up quarterback Josiah Joseph rolled out and found linebacker Grant McDonald, who had been brought in to block.

"The last couple weeks, we've been the most balanced since I've been here and it's just great. That's playoff football and that's what we're going to need," Sinagra said.

After giving up the early touchdown, McMaster tied the game 7-7 in the second quarter on a one-yard run by Jordan Lyons.

The Marauders' drive started at the Calgary 28 after a blocked punt by Dan Porter. The Dinos then twice took penalties on failed second and long plays that extended the drive for McMaster and enabled them to punch it in.

But they overcame that adversity, retaking a 14-7 lead at 6:50 of the second quarter on Joseph's one-yard run, capping off a 10-play drive.

"That offence can run the ball and can gun-sling. The defence is one of the best cover teams we played all year and they tackle really, really well," said Ptaszek. "That d-line had better push than we appreciated on film and they played very, very well. They're going to be a tough out." 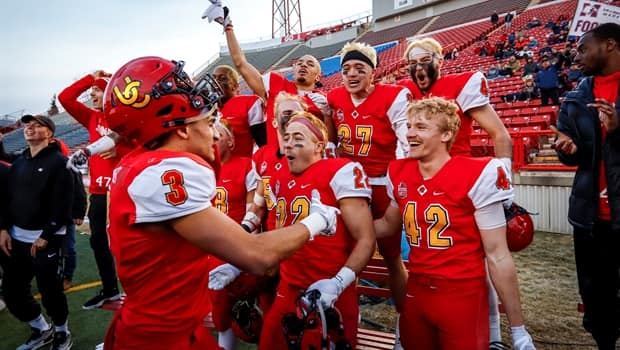 Calgary's opponent next Saturday in Quebec City will be the University of Montreal, who advanced with a 38-0 blowout win over Acadia University in the Uteck Bowl, the other semifinal.

"They're a tough, strong opponent and they're going to come out and whack us," Philpot said of the Carabins. "We're just going to have to play Canada West football and show them that we can ball, too."

The Vanier Cup, set for Nov. 23 at TELUS-Université Laval Stadium in Quebec City, will be live streamed at CBCSports.ca starting at 1 p.m. ET.