A dramatic touchdown from Vernon Adams Jr. to Jake Wieneke with six seconds on the clock gave the Montreal Alouettes an improbable come-from-behind 38-37 victory over the Winnipeg Blue Bombers on Saturday evening at Percival Molson Stadium.

What started as an embarrassing beatdown by one of the CFL's best teams turned into a record-setting performance.

The Montreal Alouettes orchestrated the largest come-from-behind victory in franchise history on Saturday evening when they defeated the Winnipeg Blue Bombers 38-37 on a touchdown in the game's dying seconds.

The Alouettes (7-5) overcame a 24-point deficit — the largest comeback in team history since 1981 when Montreal rallied from down 20 points against Toronto.

"This team has fight," said quarterback Vernon Adams Jr., who completed 27-of-43 passes for 488 yards, four touchdowns and an interception. "It's different from last year. I've been here for four years, in and out, and this team's just different.

"We have the fight, the love for each other. We stay together. There's no craziness going on. We're just worried about us."

Down 34-10 in the second quarter and unable to stop Winnipeg's offence, the Alouettes looked down and out. A few of the 19,070 fans in attendance at Percival Molson Stadium even walked out.

But a Ciante Evans interception on Bombers quarterback Chris Streveler breathed some life in the home team. Adams responded by throwing a touchdown pass to former Winnipeg receiver Chris Matthews to cut the lead to 34-17 at halftime. 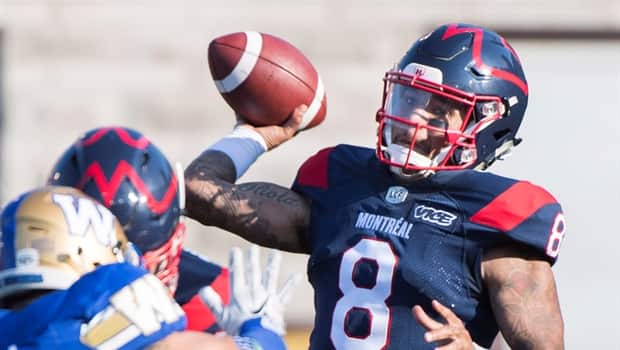 1 year agoVideo
2:19
Adams Jr. throws for three touchdowns in the 4th quarter, including completing a 94-yard game-winning drive. The 38-37 win is the biggest comeback in franchise history. 2:19

"I asked them [at halftime] if they thought this game was over," said Khari Jones, who was facing his former team as a head coach for the first time. "And to a man, they said no. So I said: 'Let's go out and fight then.' And they did.

"We have that confidence, that feeling that we can come back from anything."

With 11:41 remaining on the clock, Adams found Matthews again for his second touchdown to make it a two-score game. Winnipeg released the 29-year-old Matthews in August.

The Als kept pushing with time winding down. An 83-yard drive that lasted just 1:21 ended when Adams connected with DeVier Posey 29 yards from scrimmage for a touchdown with 2:16 left.

An acrobatic catch by Jake Wieneke kept the drive alive deep in Montreal's half. With 31 seconds remaining, Adams threw a pass to Quan Bray for 60 yards. The Als QB capped it off with a 15-yard toss in the end zone to Wieneke with six seconds on the game clock.

A stunned Winnipeg (9-4), which was coming off a bye week, would have clinched a playoff spot with a victory, however the Blue Bombers did clinch later Saturday when Ottawa lost to B.C. The Calgary Stampeders also earned a playoff berth with the Ottawa loss.

"Tough to swallow," said Streveler, who completed 19-of-22 passes for 180 yards, a touchdown and an interception. "Didn't make enough plays to close it out at the end. The interception at the end of the first half was a big mistake. It gave them momentum.

"And we made enough mistakes in the second half to let them back in the game."

The Blue Bombers offence was unstoppable in the first half, scoring a touchdown on each of its first four possessions.

Winnipeg set the tone for the encounter with an 80-yard opening drive that ended on Streveler's QB sneak from the one-yard line.

After Boris Bede kicked a field goal for Montreal, Streveler found Darvin Adams in the end zone from 13 yards out at 13:46 of the first to put Winnipeg up 14-3.

The early onslaught continued in the second quarter, with Streveler going 38 yards on the ground, untouched, for his second rushing TD of the game at 3:29.

After a one-yard TD run by Montreal's Adams, a Bombers trick play saw receiver Darvin Adams throw the ball to running back Andrew Harris downfield for the 74-yard catch and run. Streveler finished the drive, punching it in from the one to give the visitors a 28-10 lead.

The embattled Andrew Harris, who returned from a two-game suspension after testing positive for an anabolic steroid, led the team with 112 receiving yards.

Winnipeg's defence got in on the scoring fun too. Following a sack by Craig Roh, Kyrie Wilson scooped the ball up and returned it for a touchdown for the 34-10 lead. Justin Medlock missed the extra point.

"The execution just went away and we took our foot off the gas or some reason," said Harris, who added 76 rushing yards. "We have to learn from this. At the end of the day, it's a team game. Today, there were letdowns on all three phases."