Since their last Grey Cup title, the Hamilton Tiger-Cats have become accustomed to bad breaks.

Since their last Grey Cup title, the Hamilton Tiger-Cats have become accustomed to heartbreak.

In 2014's Grey Cup, Brandon Banks' late-game, go-ahead touchdown on a punt return was called back because of a penalty.

The next year, quarterback Zach Collaros was having a career season in leading the Ticats to an 8-3 record when he went down with a season-ending torn ACL. The Ticats ultimately lost in the East Final to the Ottawa Redblacks.

Then earlier this season, with Hamilton at 5-1, starting QB Jeremiah Masoli's season ended with the same injury and it looked like the organization was doomed to repeat their recent history.

But Masoli's replacement, Dane Evans, stepped in and the Ticats haven't looked back and now have a shot to win their first Grey Cup championship since 1999.

"Third times a charm I hope," said Banks following Hamilton's 36-16 win over Edmonton in the East final on Sunday. 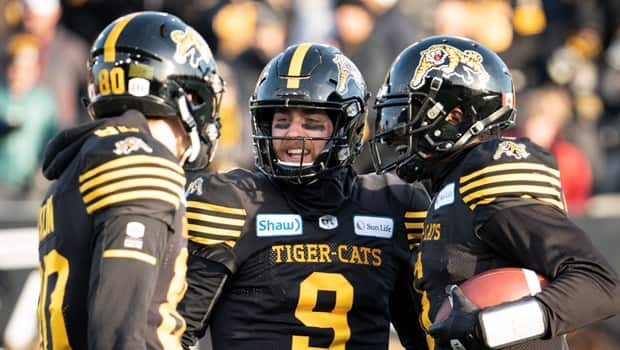 Evans has compiled an 11-2 record with 21 touchdowns, 14 interceptions and 4,035 yards passing since taking over under centre on July 26.

In his first career playoff start on Sunday, the 25-year-old threw for 386 yards and a TD in lifting the Ticats over the Eskimos and into Sunday's Grey Cup against the Winnipeg Blue Bombers.

"I expected Dane to be this good," Ticats rookie head coach Orlando Steinhauer said following the game. "He has found a way to consistently win no matter what. His preparation is meticulous. The things he did as backup — which was preparing like he's starting while also being Jeremiah's biggest supporter — was great for us.

"I'm not surprised by him winning. He's got the same game all the time. He's a natural."

Sunday's 107th Grey Cup in Calgary's McMahon Stadium against the Blue Bombers — featuring their former teammate Collaros — will ultimately define this year's edition of the Tiger-Cats.

A franchise-record 15 regular-season wins puts Hamilton in arguably its best position to succeed since their 1999 triumph, when Steinauer, then a defensive back, helped the Ticats in their 32-21 victory over the Stampeders with a fourth-quarter interception.

"We've seen the footage [of the 1999 championship win]," Evans said. "It's wild to have that opportunity for us to win now. I don't know how to explain it; there's satisfaction being there but it's weird cause we know there's still one more game to play.

'One of the saddest moments of my life'

Banks still remembers the 2014 touchdown that was nullified, the Ticats' last appearance in the Grey Cup.

"I remember it like it was yesterday. I'm over it but I won't forget it," Banks said Sunday. "But I'm going to be honest, I became way stronger after that. That was one of the saddest moments of my life — everybody's seen it. 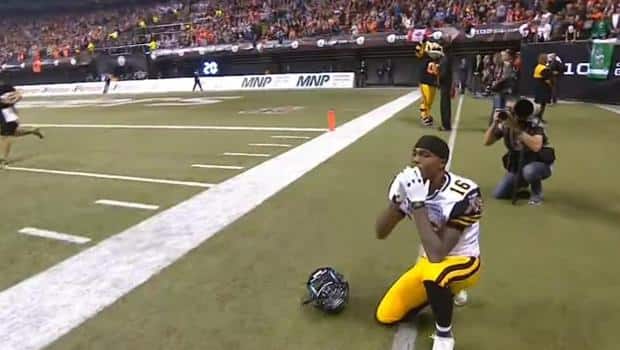 Tiger-Cats TD punt return gets called back in 4th quarter

"It made me go harder, and go back to work. I've learned from that moment; it shows the passion I have for the game. I want to win this for the city and organization.

Banks and the Tiger-Cats had also lost the 2013 Grey Cup to the Saskatchewan Roughriders.

The 31-year-old has evolved into a complete offensive threat over the past few seasons and is the East's nominee for the league's Most Outstanding Player award.

Banks, known as 'Speedy B', led the league and set a franchise record with 112 receptions, and was also tops in receiving touchdowns (13) and receiving yards (1,550).

"Brandon is ultra competitive," Steinauer said. "He wants to win so bad and he wants to be great — he just excelled with his opportunity [to be a receiver]. It's just a credit to his game, and work ethic. He battled some injuries last year, he didn't waver at all and came back here even stronger.

"We've talked a lot about that — he's a special player, he's a guy you need to game-plan around."