The Ottawa Redblacks pulled off one of the biggest upsets in Grey Cup history, holding off a late Calgary rally to defeat the heavily Stampeders 39-33 in overtime Sunday night in Toronto. 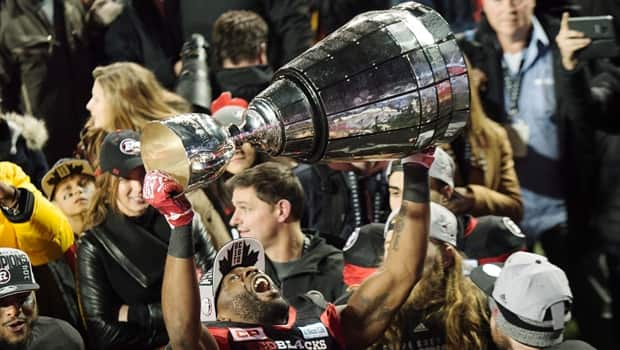 Full highlights from Ottawa's win in the 104th Grey Cup

4 years agoVideo
2:12
The Redblacks prevailed in overtime 39-33 after the Calgary Stampeders rallied to tie the game in the fourth quarter. 2:12

Burris, the game MVP, found Jackson — who bobbled the pass — on the first overtime possession. But the veteran quarterback couldn't hit a wide-open Khalil Paden for the two-point convert.

"Then all of a sudden I hear everyone go crazy and I was like 'Did it just happen? Did we just score?'

"I think little plays like that just showed you that this was our moment."

Calgary needed to match Ottawa's six points but went three-and-out on its possession. Bo Levi Mitchell's third-down pass went off Bakari Grant's hands to give Ottawa one of the biggest upset victories in Grey Cup history.

Burris was stellar, throwing three TD passes and running for two more on a night he wasn't even sure he was going to start. He left the field during warmups with an apparent knee injury but returned to outduel Mitchell. 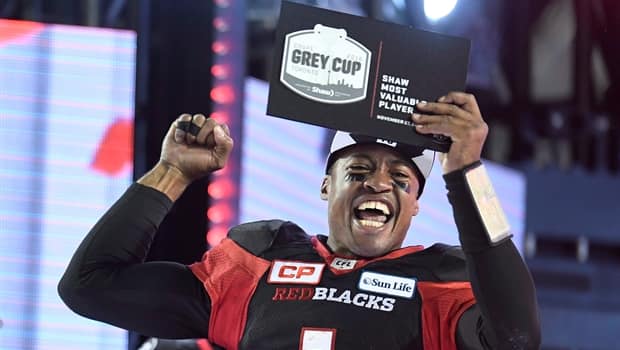 "I knew I wasn't going to be the typical running guy that I usually am, but as long as I could come out here and make good, quick decisions and get the ball out of my hand ... maybe I could do enough to help put our team in a position to be successful," Burris said.

It was the third game in Grey Cup history to go to overtime and first since 2005 when Edmonton beat Montreal 38-35 at B.C. Place Stadium.

"If you don't like ups and downs and all that kind of stuff, then football's not a good profession to be in," Ottawa coach Rick Campbell said. "But I think that's why everybody loves it."

DaVaris Daniels scored on a 19-yard TD run on third-and-two at 13:22 of the fourth to cut Ottawa's lead to 33-30 before Glenn Love recovered Rob Maver's onside kick at Calgary's 49-yard line with 1:36 remaining.

"We had a lot of heart, a lot of fight to get back," Calgary coach Dave Dickenson said. "Big hill to climb, almost made it. We were right there knocking. Just didn't get it done."

Then Andrew Buckley's one-yard TD run at 1:25 of the fourth pulled Calgary to within 27-23 as Paredes missed the convert.

The game could be the last of Burris's illustrious 17-year CFL career. The 41-year-old said this week he'll take the off-season to ponder his future.

If Burris retires, he'll certainly leave on a huge high, completing 35-of-46 passes for 461 yards en route to his third Grey Cup title. And he did a nice job of distributing the ball, using eight different receivers in the game.

Before a capacity crowd of 33,421, Ottawa was a staggering underdog after finishing atop the East Division with an 8-9-1 mark — the first team in CFL history take first in a conference with a losing record. Calgary was a league-best 15-2-1 and was coming off a 42-15 West Division final win over B.C.

And on Thursday, five Stampeders were honoured at the CFL awards banquet, including Mitchell, who received the league's outstanding player honour. Calgary was looking to finish its banner season with a Grey Cup victory to garner support as the best team in history to capture a championship.

Calgary was also playing to win for Mylan Hicks, a practice-roster player who was shot to death in September. His mother, Renee Hill, attended the game wearing her son's No. 31 jersey and huddled with the defensive backs prior to the contest.

But Burris, last year's outstanding player, stole the show in leading an Ottawa team to a Grey Cup win for the first time since 1976 and avenging the franchise's loss to Edmonton in the 2015 CFL title game.

Burris's apparent injury provided plenty of pre-game drama, and Burris wasn't with the Redblacks when they took to the field. But he rejoined his teammates after undergoing treatment that reportedly included having the joint frozen and capped an impressive 65-yard, 10-play drive opening with a one-yard TD run at 6:46 to open the scoring.

"They did some things, gave me some happy pills, to make sure I didn't feel much pain," Burris said.

Calgary effectively countered with a four-play, 79-yard march Mitchell capped with a seven-yard TD strike to Jerome Messam at 9:14. After Ray Early's 37-yard field goal put Ottawa ahead 10-7 at 13:03, the Stampeders lost leading receiver Marquay McDaniel to a shoulder injury late in the quarter.

On mobile and can't view the live blog? Click here.